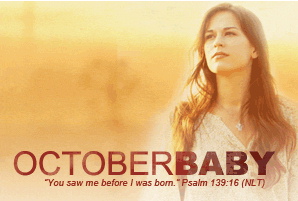 When I was in Washington D.C. for the March for Life, I was privileged to view a pre-screening of the absolutely amazing movie October Baby. I was very deeply moved by the film, as I think was everyone who saw it. I think above all the movie conveyed the precise meaning of its subtitle: every life is beautiful.

This is a very powerful movie that portrays the pain caused by abortion but conquered by the joy of and beauty of human life and love. It’s the sort of movie that hits you – it is a moving movie.

I think in trying to build a culture of life, and to take down this “culture of death” that has led to abortion, a very crucial point of this is through good art, and especially movies. This is a culture war, and that means we have to change the culture. Films like October Baby are powerful weapons in changing the hearts and minds of Americans. But more than that, they are films that celebrate the beauty and dignity of every human life in a way that is very beautiful and moving. I see October Baby as a challenge to Pro-lifers to change the culture through beauty, through good movies, good art, good music…

The film tells the story of Hannah, a girl who discovers that her many health problems are all due to the fact that she was a failed abortion and that her parents had adopted her. Struggling with the pain and confusion of this realization, she begins looking for where she came from and who her real birth mother is. She is helped by her friend Jason and joins his friends on a road trip over Spring Break. The film portrays her own interior struggles to come to grips with reality, to heal, to learn to forgive.

Recently I began looking up more information about the film, and I discovered the story was actually inspired by abortion survivor and Pro-life activist Gianna Jessen, who said of the movie: “I laughed so hard and cried so hard, and healed.” I had heard Gianna Jessen speak at a rally a number of years ago and I had been incredibly moved by hearing her testimony. I stumbled across this video, which is an interview with Gianna Jessen about the movie.

As if that wasn’t enough, just today I discovered this incredible video. Even before being made, this film has already dramatically changed lives.

So please spread the news about this movie! October Baby hits theaters in less than two weeks. You can go here to find a theater near you that’s playing the movie. Spread the trailer around, and try and form groups to go to this movie! This is a movie that definitely deserves our support.