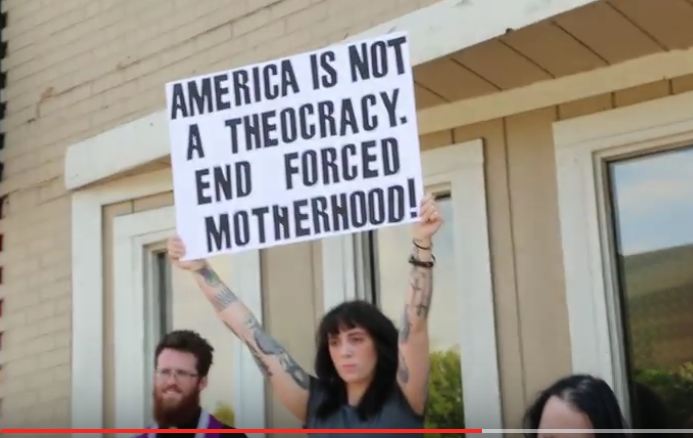 In 2015, a woman known as “Mary Doe” had an abortion in the state of Missouri. But Missouri is one of several states with a 72-hour waiting period, so she filed a lawsuit in an attempt to get the law overturned. Now, two years later, the case will be heard by the Missouri Supreme Court.

Doe, a member of the Satanic Temple, claims that the waiting period violates her religious freedom:

As you know, state law requires a waiting period after I first receive counseling before I can undergo an abortion. I regard a waiting period as a state sanctioned attempt to discourage abortion by instilling an unnecessary burden as part of the process to obtain this legal medical procedure. The waiting period interferes with the inviolability of my body and thereby imposes an unwanted and substantial burden on my sincerely held religious beliefs.

This letter constitutes my acknowledgment that you have notified me of the state mandated waiting period, but demands that you do not abide by this obligation because the waiting period offends my sincerely held religious beliefs, which take precedent.

Lucien Greaves, co-founder of the Satanic Temple, explained how being pro-abortion has suddenly become a religious right. “As Satanists we believe in individual autonomy, personal choice, and the inviolability of one’s own body,” he claimed. “Further, we believe one should be free to make one’s own decisions, uncoerced, based on the best available scientific evidence, whether or not the science comports with the religious and/or political views of others.”

The Western District of the Missouri Court of Appeals ruled in her favor earlier this month, after her case was originally rejected by the Cole County Circuit Court, which means the state Supreme Court will now hear the case. A date has not yet been set. The court wrote that her suit “raises real and substantial constitutional claims.” Gov. Eric Greitens, Attorney General Josh Hawley and others are named as defendants.

Doe claims that the sole purpose for the law “is to indoctrinate pregnant women into the belief held by some, but not all, Christians that a separate and unique human being begins at conception … [b]ecause the law does not recognize or include other beliefs, she contends that it establishes an official religion and makes clear that the state disapproves of her beliefs.”

However, as this video on fetal development shows, each new human life begins at fertilization, having its own DNA distinct from his or her parents. This is scientific fact — not religion:

The actual purpose of the law is to ensure informed consent is taking place, as well as to prevent coerced abortions, which are far from rare. It’s also worth noting that waiting periods are common throughout Europe, where abortion laws are much more restrictive than they are in the United States.