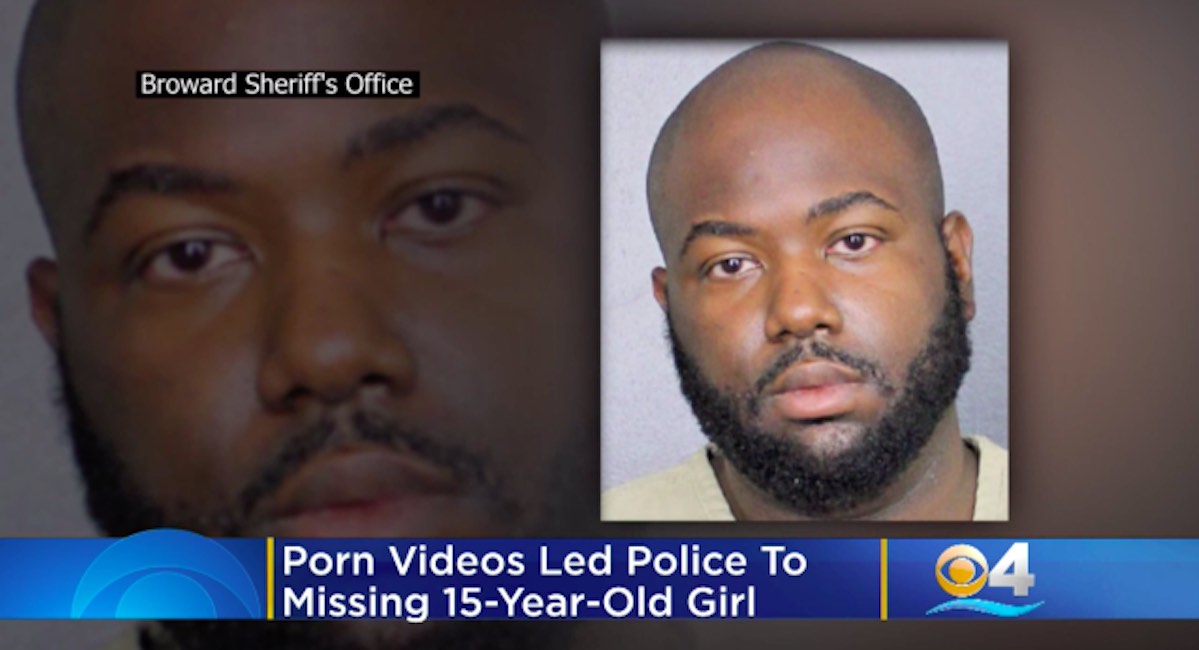 A 30-year-old man has been arrested, after a mother whose 15-year-old daughter was missing for a year spotted her in multiple videos on pornographic websites. The details of how the mother discovered her daughter are unclear. Christopher Johnson is being held on a $75,000 bond, and is being held on a felony charge of lewd or lascivious battery on a victim between 12 and 16.

The girl, who has not been named due to her age, went missing December of last year. Authorities spotted her with a bald man, eventually identified as Johnson, in surveillance footage from a south Florida 7-11 store, but weren’t able to identify the man she was with until much later. A convenience clerk reportedly called authorities in February after recognizing the victim in the store, who attempted to hide her face from the clerk. Eventually, however, it was her mother who, months later, found her online in the most horrific way: on adult websites, in which the trafficking victim was engaging in sexually explicit acts. Authorities then discovered a total of 58 videos, posted on sites like Periscope, Pornhub, Modelhub, Snapchat, and more. The teen told police that the videos were shot with Johnson at his residence.

In addition to the sexual abuse, the girl told police that she became pregnant at one point, and says Johnson took her to get an abortion. Johnson claims he was not the father, but the victim alleges that she and Johnson engaged in sex and that she got pregnant from Johnson. Despite her young age, and the fact that Johnson is much older, facility staffers seem to have chosen not to notify police. The arrest report says that Johnson took her to the facility himself. It also states that a receipt from the abortion facility was found in Johnson’s residence, but police have not at this time released the name of the facility. The age of consent in Florida is 18, but children who are 16 or 17 may consent to sexual activity with persons up to age 24.

This sort of lack of reporting is, unfortunately, all too common. As Live Action investigations have shown, the abortion industry frequently commits abortions on victims of abuse, and then hands them right back to their abusers, no questions asked, and without alerting authorities.

In the Aiding Abusers, Child Sex Trafficking, and and Sex Abuse investigations, Live Action discovered that the abortion industry aids rapists and sex traffickers by not reporting their crimes. Planned Parenthood employees, for example, coached “sex traffickers” on how to get STI testing and abortions without having to report their victims’ ages, avoiding police reports. Other facilities across numerous states were happy to look the other way when underage girls came in with adult men to get abortions, never reporting the suspected abuse, as is required by law.

Sadly, this isn’t just theoretical, and this victim’s case is just the latest tragic example. Sexual predators are routinely helped by abortionists. Planned Parenthood, for example, was caught covering up multiple instances of child rape. Another Planned Parenthood facility never informed authorities after committing an abortion on teenager Danielle Cramer, who had been abducted by 40-year-old Adam Gault. After the abortion was completed, they handed her back to Gault. A 13-year-old girl, abused by her stepfather, received an abortion at Planned Parenthood, who did not report the abuse — and so the girl continued to be raped for another seven months. A San Francisco Planned Parenthood covered up the rape of an 11-year-old girl. A Cincinnati Planned Parenthood was sued by two victims, who both were taken to that facility by their abusers. The staffers did nothing, which resulted in their abuse continuing for months and months. A Florida rapist took his victim for seven abortions, which were never reported. The instances are practically endless.

Abortion is also an oft-used tool by sex traffickers if their victims get pregnant, with often little-to-no follow-up care. Abortion allows the victims to be forced back into sex slavery quickly, without any evidence of the abuse the victims are suffering. The most common abortion facility where sex trafficking victims are taken is Planned Parenthood. As one survivor noted, this was because Planned Parenthood “didn’t ask any questions.”

These stories are heartbreaking, but as long as politicians and abortion defenders continue to look the other way, they will continue.