Victims of sex trafficking are sometimes taken to abortion facilities or Planned Parenthood centers for forced abortions by their pimps and, in some cases, the doctors they are taken to may have been clients of their pimps. This was revealed in a stunning report published by the Annals of Health Law in 2014 and entitled, Health Consequences of Sex Trafficking, notes that survivors also had “significant contact with clinical treatment facilities, most notable Planned Parenthood.”

Survivors also stated that they received other medical services from providers who knew they were being controlled by a pimp. Roughly two-thirds of survivors who specified a location for their abortions identified a clinic as the site of their abortion, indicating ongoing systemic problems inside the abortion industry. One survivor told the researchers that, “I was under serious pressure from my pimps to abort the babies.”

In addition, one-fourth of the places the victims identified as places they were taken for medical care was Planned Parenthood.

On the surface, this may lead some to believe that Planned Parenthood centers are necessary, but, this theory can be contradicted by the words of one sex trafficking victim who told researchers that the reason she was taken to the abortion chain was because, “Planned Parenthood didn’t ask any questions.”

That may be because pimps are sometimes involved in the abortions committed on these sex traffic victims. According to a national study funded by the Office of Juvenile Justice and Delinquency Prevention of the U.S. Department of Justice, “A cross-sectional survey of female patients in five family-planning clinics (affiliated with Planned Parenthood) in Northern California found that of the 9% of young women (aged 16-29 years old) who sought services at these family planning clinics, 16% reported pimp involvement.”

Sex Trafficking, Forced Abortions, and Profit by the Abortion Industry

In one example published in the footnotes of a report by the Virginia Journal of Criminal Law, authorities say that a victim of convicted sex trafficker, Lenny Paul Haskins, forced her to undergo an abortion against her will and that, despite the victim’s protests and requests that she not be required to have an abortion, he paid for the abortion and was present when she was forcibly transported to the abortion provider.

Senior advisor on Trafficking in Persons for the U.S. Department of State, Laura Lederer, conducted the study in which 55 of 107 sex trafficking victims surveyed — or 55 percent — had at least one abortion. According to a report in the DesMoines Register, thirty percent reported having multiple abortions, and one female respondent reported having 17. More than half of respondents said abortion was not their choice and they were ordered to abort by their traffickers.

Women and girls are often taken to abortion clinics by their pimps or a person working for the pimp, a victim of the sex trafficking industry told Facing Life Now TV. “Marlene,” who had become “trusted” by her pimp, told the interviewer that she was responsible for booking abortions when a woman became pregnant and noted that, “The pimps and the traffickers would get fake I.D.’s for the girls and we would take them to have abortions.”

When asked if abortion clinics like Planned Parenthood would turn down the abortions for the girls, she replied, “Oh, no, absolutely not…honestly they had to know that these were teenagers, they were not adult women.”

Marlene said that participating in these abortions traumatized her. She recalled a 14 year-old sex trafficked victim who became pregnant and was being forced to have an abortion: “So, I had the whole house raided — she was rescued,” she said.

Cindy Collins, who works at a crisis pregnancy center in Louisiana and has worked with women who have been trafficked, told the DesMoines Register that sex trafficking victims are often ordered to abort pregnancies by their traffickers. And, Nita Bells, regional director for Oregonians Against Trafficking Humans, told Facing Life Now that, when it comes to forced abortions within the sex trafficking industry: “The abortion industry is profiting tremendously…financially.”

Another disturbing fact is that even though abortion is supposed to be about ‘choice,’ survivors claim that they were given forced abortions at specific clinics where the abortion doctors may have been sex trafficking clients.

As one victim in the study Health Consequences of Sex Trafficking told researchers:

“I got pregnant six times and had six abortions during this time. Several of them were from a doctor who was a client — he did them back door — I came in the back door after hours and paid them off the books. This kept my name off any records…At least one of my abortions was from Planned Parenthood because they didn’t ask any questions.”

Tragically many of the victims of sex trafficking are minors who should be protected by mandatory reporting laws covering abortion and Planned Parenthood facilities (and are, in some states). If an underage child is being “pimped” and is then taken for an abortion or other medical service, personnel at abortion clinics in some states are required to report them as suspected child abuse. Whether reporting is a requirement of the law or not, common sense and basic human decency should lead those who claim to care to do whatever is necessary to rescue girls and women in slavery. However, as Live Action has documented and trafficked girls have claimed, Planned Parenthood often fails to report suspected abuse to authorities.

In one of many Planned Parenthood clinics Live Action visited during an undercover investigation, a New Jersey clinic manager warned the Live Action investigator, posing as a pimp, to have their trafficked underage girls lie about their age to avoid mandatory reporting laws. 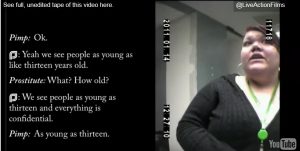 Heather Estes, CEO of Planned Parenthood’s Shasta-Pacific region joined the public relations bandwagon, claiming that Planned Parenthood’s practice is to report all cases of child prostitution and other child abuse to the authorities. Additionally, worried what the Live Action News footage would show about their center, Planned Parenthood of New York City claimed on Facebook that,

“All teens coming into Planned Parenthood of New York City are screened for child abuse and neglect….”

The Truth About Planned Parenthood’s Record

However, in state after state, Planned Parenthood’s record of reporting child sexual abuse has been called into question. If it can be proved that Planned Parenthood is breaking the law through a failure to report, then the abortion chain — which currently receives half a billion dollars in federal funding — could be at risk of losing those funds due to regulations under Title X, a government program that funds family planning programs. Title X requires that participants, like Planned Parenthood, comply with all state and federal laws regarding the reporting of child abuse.

The real tragedy of turning a blind eye to children who are taken for abortions are that often, these victims are returned to their abusers to be repeatedly traumatized again and again. Whether a child is the victim of sexual abuse by a family member or friend or that of a pimp involved in prostitution and sex trafficking, they deserve to be protected and not to have medical personnel turn a blind eye for profit.

Sadly, as documentation continues to mount, we can conclude that abortion and Planned Parenthood facilities care more about the bottom dollar than the patients they claim to serve, just as former Planned Parenthood manager, Ramona Trevino, explains in the video below: