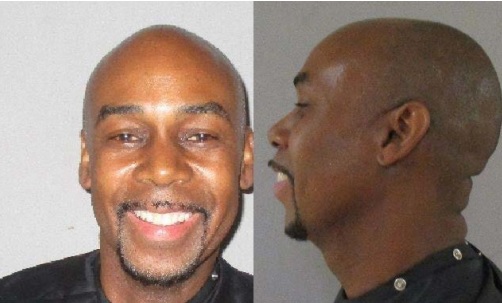 Abortion has once again been used to cover up sexual abuse. The victim was sexually abused for years, beginning at age 12, and was allegedly forced to have seven abortions by Florida man Leon Norman Wiley, Jr., now 52 years old. The victim told police that Wiley took her virginity at age 12 and engaged in sex with her “500 times” up to “three times a day” until July of last year. The victim is now in her early 20s, and recently came forward about the abuse after Wiley allegedly began to make inappropriate sexual contact with her seven-year-old daughter.

According to the police report obtained by Live Action News, the victim “reported being impregnated approximately seven (7) times during those incidents. Each time she would get pregnant Leon Wiley Jr. would take her to a woman’s health clinic to receive an abortion [Orlando and Ft. Lauderdale].” It appears that the underage abortions were never reported to authorities by the abortion facilities. A spokesperson for the Flagler County Sheriff’s Office was unable to confirm to Live Action News the age of the victim with each abortion; however, the disturbing information reveals yet again how easy it is for sexual predators to use abortion to cover their crimes.

The case originated on February 24, 2019, when the Flagler County Sheriff’s Office (FCSO) responded to the victim’s home for a possible sex crime involving the victim’s seven-year-old child. It was at this time that the victim disclosed that she had been sexually abused by Wiley, according to an FCSO release obtained by Live Action News. A warrant for Wiley’s arrest was issued on April 4, 2019, after police had gathered multiple recordings of Wiley admitting to the abuse. According to FCSO, the recordings allegedly reveal Wiley making several admissions to the crime including having had sex with the victim since the age of 12.

During this time, the victim carried one pregnancy to term but was uncertain if Wiley was the father, or if the father was a juvenile boy with whom she was also sexually involved. According to news reports, Wiley, Jr. has been charged with sexual battery – or rape – of a custodian over a victim between the age of 12, a first degree felony with a potential for life in prison, and sexual battery of a victim between the ages of 16 and 17, a second degree felony. The 21-year-old victim had not come forward previously because she was in fear of Wiley “retaliating against her,” the police report states.

From the description in the image below, it also appears that the victim may have been trafficked by Wiley.

The investigation is ongoing. 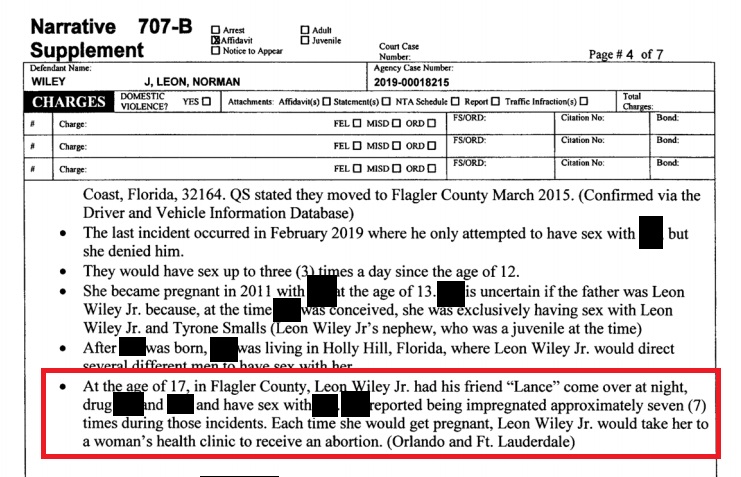 This current case resembles another past case researched by Life Dynamics, which also involved Florida abortion facilities, as well as the National Abortion Federation (NAF), for a failure to report the sexual abuse of a 12-year-old child in violation of mandatory reporting laws.

In that case, the victim was originally taken to the All Women’s Health Center abortion clinic in Gainesville, but the victim was too far along to have an abortion there. The facility suggested the parent contact the National Abortion Federation (NAF) for a referral, which NAF provided, along with funds for the late-term abortion procedure. They were then referred to a NAF abortion facility operated by abortionist Michael Benjamin, who estimated that the victim was 24 weeks pregnant. Following an eight-minute counseling session with Benjamin — enough time he claimed was needed to determine (falsely) that the pregnancy was not the result of rape (or so he claimed) — the victim underwent a multiple-day, late-term abortion procedure. She was then returned to the sexual predator for potential further abuse.

Michael Benjamin, abortions up to 24 weeks

Police reports indicated that no one at either abortion facility or NAF had contacted authorities to report even the suspicion of sexual abuse. Authorities were notified later by the victim’s pediatrician when he discovered she had been recently pregnant and had the abortion. Although the predator in that case was eventually arrested and is in jail, Benjamin received a mere slap on the wrist by the State’s regulatory board, Florida Department of Health (FDH), for his part. And even that was suspect because, according to the Life Dynamics report:

The FDH also put Benjamin’s medical license on probation for two years and assigned Dr. Frank Rodriquez to monitor him during that period. This was done, despite the fact that Rodriquez and Benjamin were known to be co-workers at another NAF abortion clinic where, in 2006, an incident similar to the one involving “Emily” had occurred. In that case, high school teacher, Andrew Loyd Foster, impregnated one of his underage students and took her to the Presidential Women’s Center in Palm Beach County for an abortion. (LDI’s full report here and visit their website ChildPredators.com for more of this abuse cover-up.)

FDH’s Administrative Complaint against Benjamin revealed this response after one of Benjamin’s nurses was asked by the Department of Children and Families (DCF) to explain why they failed to report. She stated, “Maybe we’ve been hardened with so many kids coming in.”

Last year, Live Action presented a seven-part docuseries along with an investigative report documenting the systemic cover-up of child sexual abuse at America’s biggest abortion chain, Planned Parenthood, with some victims as young as 12 years old. Below is one video in that series:

Live Action News has documented numerous criminal cases showing how Planned Parenthood is ignoring obvious red flags of potential abuse and even possible sex trafficking, while covering for sexual predators — yet the news media, politicians, and Hollywood stars continue to turn a blind eye to abuse victims in support of the abortion industry.