There is more to the data than Planned Parenthood’s spokespersons and media supporters are acknowledging.

CLAIM: If Planned Parenthood is defunded, women will have few places to go to receive health services, specifically contraception care, because it would overwhelm FQHC sites.

Live Action News has documented that Planned Parenthood, which masquerades as a health care provider, is actually decreasing the number of services that it offers women. When comparing Planned Parenthood’s services to FQHC sites you see that defunding this abortion corporation will have little effect on women in particular.

A review by Newsbusters examined deceptive media reports from Mississippi.

Live Action News has broken down the numbers as follows:

According to the data, there are 9600 FQHC sites (which offer a vast array of health care services). Guttmacher claims that 60 percent of those 9600 sites offered contraception services to ten or more clients. If you do the math, that still leaves 5,830 sites.

Taxpayer-funded health centers, as identified by the federal Health Resources and Services Administration (HRSA), saw a 2 million patient increase by 2015, providing care to 24,295,946 patients. In contrast, Planned Parenthood has lost more than half a million patients (600,000) since 2011. 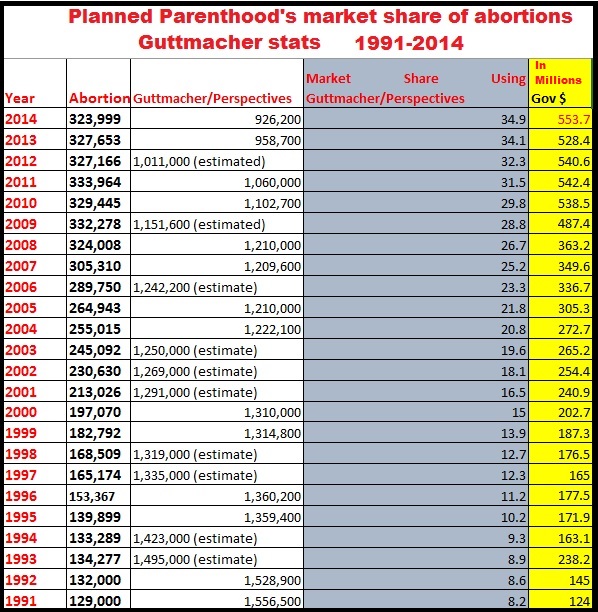 As Live Action News has documented, the Guttmacher report actually supports our claim that women don’t need Planned Parenthood for contraception services or any other health service.

There are plenty of reasons to defund Planned Parenthood:

The list above does not even include the number of women injured or killed after using Planned Parenthood’s alleged “services.”

Taxpayers should not be forced to send half a billion dollars to an organization accused of fraud and potential violations of the law, whose market share of abortions continues to increase while other services are decreasing.

It’s time to remove government dollars from Planned Parenthood once and for all.