The 340B Drug Discount Program is a federal government program created in 1992, following the enactment of the Medicaid Drug Rebate Program, which allows participating drug manufacturers to give certain covered health care entities access to discounted prices on outpatient drugs. The HRSA (part of the Department of Health and Human Services) oversees the program. Covered entities include hospitals and specified federal grantees, such as Planned Parenthood.

According to the Guttmacher Institute’s 2010 report on the 340B Program:

The law requires manufacturers to sell their drugs to a range of safety-net providers, including Title X–supported family planning centers and community health centers, below a certain price (called a price ceiling) calculated for each drug each fiscal quarter using a statutory formula based on private-sector prices. The companies are permitted to set their safety-net prices below that ceiling, if they so choose. Congress designed 340B to generate discounts that are equivalent to the rebates on drugs provided to state Medicaid programs, also set under federal law.

Program participants were initially allowed to self-police regarding program compliance. But that proved to be a mistake.

In September 2011, a Government Accountability Office (GAO) report found that HRSA’s oversight of the 340B program was inadequate to provide “reasonable assurance that covered entities and drug manufacturers are in compliance with program requirements.” The GAO recommended that HRSA conduct selective audits of covered entities to provide additional program oversight, monitor for program violations, and prevent diversion and duplicate discounts.

A 2015 HRSA audit found Planned Parenthood of Illinois (PPIL) non-compliant regarding the 340B Drug Pricing Program for the following: 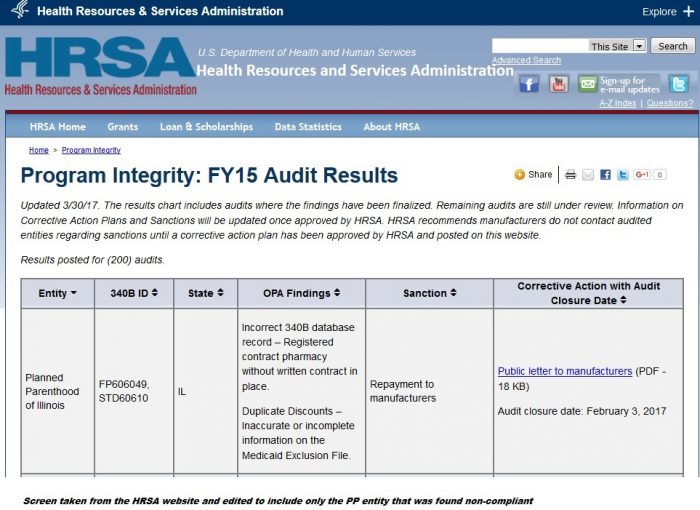 Federal law prohibits requiring manufacturers to pay discounts or rebates under both the 340B Program and the Medicaid Drug Rebate Program (duplicate discounts). And it prohibits resale of 340B drugs to a person who is not a patient of the entity (diversion). HRSA and manufacturers have had the authority to audit covered entities regarding their compliance with diversion of drugs and duplicate discounts since the inception of the 340B Program.

A public letter to manufacturers published online states that Planned Parenthood was to “begin a dialogue on a method for repayment to affected manufacturers.”

The letter also stated in part, “PPIL listed incorrect or incomplete billing information on the 340B Medicaid Exclusion File. This may have resulted in duplicate discounts as prohibited by section 340B(a)(5)(A) of the PHSA.” 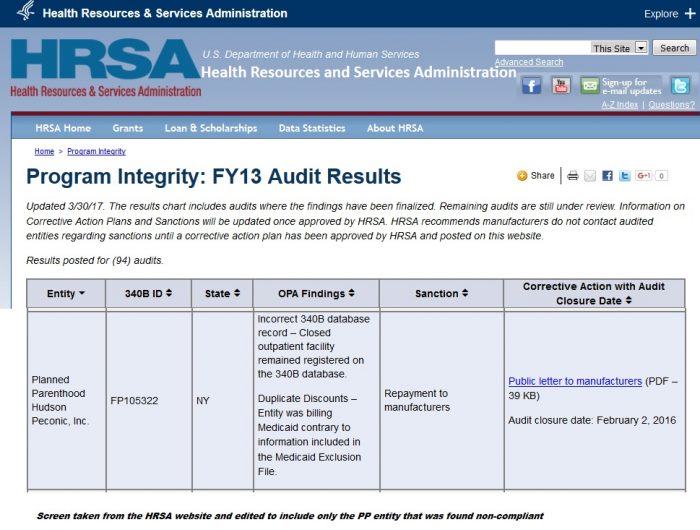 According to the GAO:

Covered entities also are prohibited from subjecting manufacturers to duplicate discounts whereby drugs prescribed to Medicaid patients are subject to both the 340B price and a rebate through the Medicaid Drug Rebate Program…. Covered entities that decide to use 340B drugs for Medicaid patients must notify HRSA so that it can coordinate with state Medicaid agencies for billing purposes.

The audit covered the Hawthorne location as well as 11 associated clinics (listed below) for services provided during the period September 1, 2013 to February 28, 2014.
The HRSA audit report states that “PPHP was billing Medicaid contrary to information contained in the HRSA Medicaid Exclusion File. This action may have resulted in duplicate discounts as prohibited by 42 USC 256b(a)(5)(A),” according to the letter to manufacturers.

The letter also states that Planned Parenthood Hudson Peconic “accept[ed] the audit findings, and is… investigating further to determine whether any amounts are owed to manufacturers,” and if so, “will notify all affected manufacturers to offer repayment.” Apparently, the duplicate discounts happened “because PPHP’s election on the OPA database incorrectly reflected that PPHP did not use 340B drugs for its Medicaid patients….”

The audit was eventually closed on February 2, 2016. 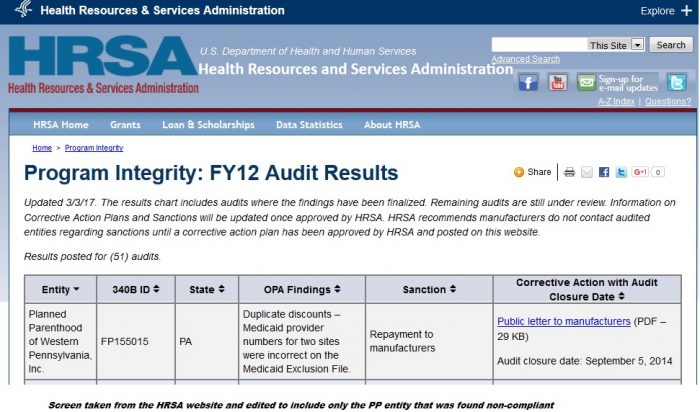 In May 2012, Planned Parenthood of Western Pennsylvania was also found to be out of compliance with 340B Drug Pricing Program (340B Program) requirements:

The public letter to manufacturers states that as a result of the audit:

In 2017, the Charlotte Lozier Institute and Alliance Defending Freedom (ADF) reviewed a number of additional audits from a variety of agencies, to identify waste, abuse, and potential fraud by Planned Parenthood and others.

An example of a case involving the 340B Drug Program was found when ADF attorneys represented federal False Claims Act whistleblower Jonathan Bloedow, a Washington resident who discovered the alleged frauds through state open records requests and filed suit against Planned Parenthood of the Great Northwest in July 2011. The Lozier/ADF report notes:

The suit alleged that Planned Parenthood submitted false claims to Washington’s Department of Social and Health Services and its Health and Recovery Services Administration (HRSA)….

The report then states that “the Washington Medical Assistance Administration (MAA) uncovered massive overbilling above actual acquisition cost by Planned Parenthood in Washington.” In an internal email, MAA summarized the overbilling, saying they were billed for birth control pills by family planning providers “at our maximum allowable cost rather than their acquisition cost, which is required of them by statute as a 340B drug purchaser.” MAA specifically mentioned that Planned Parenthood was doing this, “billing [MAA] around $16.95; $16.99 etc for a product that costs them somewhere around $2.50, $2.00 or lower” when the maximum allowable cost was $17.00.

Despite this abuse, Planned Parenthood wasn’t penalized. The report notes:

Documents indicate that Planned Parenthood has been caught and warned on this issue on at least two occasions. Yet no further audit or prosecution beyond the two audits detailed supra has taken place, despite pressure from the public.

In conclusion, Lozier and ADF researchers found that the publicly available audits, as well as confidential sources who have inside knowledge of Planned Parenthood’s operations, suggest:

Planned Parent­hood affiliates systematically take advantage of “overbilling” opportunities to maximize revenues in complex, well-funded federal and state programs that are understaffed and rely on the integrity of the provider for program compliance.

If it’s “integrity of the provider” you’re relying on in matters like this, better look somewhere other than Planned Parenthood.