Reports on patient services at Planned Parenthood in Iowa and Nebraska indicate that federal health centers outperformed the abortion corporation on patient numbers and on overall vital health services like cancer screenings. Congress is currently debating whether taxpayers should be forced to pay half a billion dollars annually to Planned Parenthood. Some state lawmakers (like those in Nebraska) seem to be either refusing to say how they will vote, or are wavering on whether they would redirect those monies toward federal health centers.

Recently passed legislation in Iowa is a step ahead of the federal proposal and reroutes $2 million away from Planned Parenthood. In May, according to the Des Moines Register:

Gov. Terry Branstad signed a $1.7 billion health and human services appropriations bill that calls for the Iowa Department of Human Services to discontinue the federal Medicaid family planning network waiver, foregoing about $3 million in federal funding. Instead, the state will use about $3.3 million to recreate its own family planning network so that it can prohibit the funding of clinics that provide abortions.

Planned Parenthood’s website reports that for the most recently reported year, the organization saw a total of 26,937 patients in Iowa and 6,975 in Nebraska.

In contrast, federal health centers listed under the Health Resources Services Administration’s website (HRSA) serve a wider array of health services and saw 184,520 patients in Iowa and 76,504 in Nebraska in 2015.

While Planned Parenthood operates just 14 centers in those two states, there are 168 Rural Health Clinics and 14 Federally Qualified Health Centers which provide services at 60 sites in Iowa alone, according to data published by Rural Health Info Hub.

In Nebraska, there are 139 Rural Health Clinics and seven Federally Qualified Health Centers which provide services at 42 sites in the state.

Planned Parenthood’s most current online statistics say that in Iowa, the organization performed 13,716 cancer screenings, and 3,228 in Nebraska. In contrast, 50.6 percent of the 184,520 patients seeking care at Iowa federal health centers and 54.9 percent of the 76,504 patients at Nebraska federal health centers received cervical cancer screenings alone.

Affiliate: Planned Parenthood of the Heartland

The money in question originated from a federal family planning program administered by the Nebraska Department of Health and Human Services. Federal law specifically prohibits the program’s funds from being used for abortions.

Strangely, despite a decrease in patients and services for Planned Parenthood of the Heartland, the affiliate’s government funding has gone up.

This trend follows a national trend previously documented by Live Action News, in which Planned Parenthood’s services in areas such as contraception, Pap tests, cancer screenings, and breast exams have decreased while government funding and abortions are increasing.

Annual reports for the affiliate show that in 2012, government funding totaled 10 percent ($2,673,281) of the affiliate’s revenue.

By 2016, government funding had climbed to almost 16 percent of the affiliate’s overall revenue with taxpayers sending $3,151,851 to the abortion corporation from those four states.

This increase in federal taxpayer dollars came despite a 17 percent decrease in patients and an overall drop in health services.

Services at Planned Parenthood of the Heartland are also decreasing. 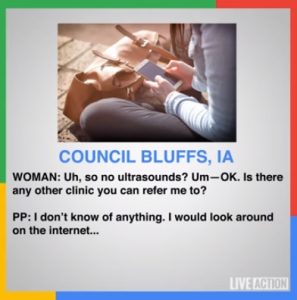 Adoption services (which are referred out) are not even mentioned in the 2016 PPOH report, despite only showing four of such referrals in 2012. A Live Action News report showed how Planned Parenthood president Cecile Richards, who has misled the public about the organization’s services in the past, may have stretched the numbers with regard to the organization’s adoption services in Iowa.

State and national numbers reveal that Planned Parenthood’s focus is on one thing: abortion.