Planned Parenthood and its supporters often claim that the majority of the federal tax dollars they receive are mere “reimbursements,” but these “reimbursements” are partially funded by the federal government and by the states, 17 of which allow tax dollars to fund abortions in some capacity. A new video released by Live Action explains the concept of fungibility, and why claiming that taxpayer dollars don’t fund abortion just isn’t accurate:

Planned Parenthood bases its false claim in part on the federal Hyde Amendment, which, as Live Action News has previously pointed out, prevents federal (not state) dollars from funding most abortions through Medicaid, but holds an exception to allow funding in cases involving rape, incest, and life of the mother. 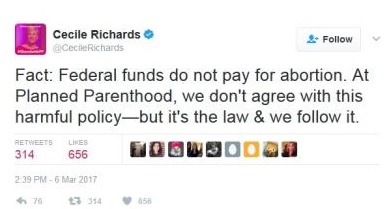 Expenditure reports published by the Centers for Medicare and Medicaid Services (CMS) reveal that despite the federal abortion funding prohibition, in 2015, $500,659 taxpayer dollars were allocated for abortions under Medicaid assistance programs. Of that total, $327,341 was paid from the federal coffers, and $173,318 was paid by the states where the abortions were committed.

The prior year was no better.

The net national total of Medicaid program assistance expenditures for 2014 showed that taxpayers spent $1,204,949 on abortions, with $604,897 picked up federally and $600,052 picked up by taxpayers within the states.

Taxpayers contributed over a million dollars for abortions in 2014.

Title X requirements allow providers like Planned Parenthood to refer for abortions — however, the Title X provider is not allowed to schedule the abortion or provide additional assistance to the woman unless the abortion is “medically indicated“:

Where a referral to another provider who might perform an abortion is medically indicated because of the patient’s condition or the condition of the fetus (such as where the woman’s life would be endangered), such a referral by a Title X project is not prohibited by section 1008 and is required by 42 CFR 59.5(b)(1). The limitations on referrals do not apply in cases in which a referral is made for medical indications.

“Medically indicated” is another term for “medically necessary.” For most of us, this means in dire circumstances — and according to the language of the federal Medicaid funding standard defined in the Hyde Amendment, this would seem to hold true:

( 1) if the pregnancy is the result of an act of rape or incest; or

(2) in the case where a woman suffers from a physical disorder, physical injury, or physical illness, including a life endangering physical condition caused by or arising from the pregnancy itself, that would, as certified by a physician, place the woman in danger of death unless an abortion is performed.

However, according to some recently unearthed testimony from a 2015 court case, Planned Parenthood’s definition is much more broad. When the state of Alaska’s Department of Health and Social Services drafted a regulation redefining medical necessity to match the federal Medicaid funding standard, Planned Parenthood sued. The organization turned to Judge Sen Tan, who issued an order claiming that psychological reasons should be included under “medical necessity”:

[T]he terms medically necessary abortions or therapeutic abortions are used interchangeably to refer to those abortions certified by a physician as necessary to prevent the death or disability of the woman, or to ameliorate a condition harmful to the woman’s physical or psychological health, as determined by the treating physician performing the abortion services in his or her professional judgment.

In response to Judge Tan’s order, the State argued:

Judge Tan’s standard is so broad and nebulous that it permits a doctor to consider factors it believes should be irrelevant to medical decision-making.

These include social and economic considerations.

In 2015, Superior Court Judge John Suddock upheld the order, essentially forcing taxpayers in the State of Alaska to fund abortion on demand.

Judge Suddock’s order is eye opening, because in addition to its complete overreach, it reveals the mindset of Planned Parenthood (which currently controls over 35 percent of the abortion market share in the U.S.). It also reveals that when the abortion corporation tells Congress, the media, and the public that tax dollars don’t pay for abortions, its representatives know they are being deceptive.

Court testimony from Planned Parenthood abortionists in Alaska reveals that they see every abortion as medically necessary.

In other words, an abortion is medically indicated if it will ameliorate a condition harmful to the physical or psychological health of the patient in the professional judgment of the treating physician…

He has never concluded that an abortion is other than medically indicated when a woman wishes to terminate her pregnancy.

The testimony of a second Planned Parenthood abortionist, Dr. Jan Whitefield, was also reviewed in the document. Whitefield told the court that Medicaid patients make up a large portion of his abortion practice — about one-third. According to the document, Whitefield felt that the cost of delivering a baby to term was a “very substantial amount of money for women of the Medicaid population.”

And, like his colleague, abortionist Whitefield has “never found that an abortion is other than medically indicated,” according to the document.

Statistics published by the Alaska Department of Health and Social Services Bureau of Vital Statistics show that in 2015, a total of 1,334 induced terminations were reported to the state. 32.8 percent of the women who obtained abortions that year reported that Medicaid was the source of payment, which means taxpayers footed the bill for 438 abortions in Alaska in 2015. In 2016, abortions dropped in the state by 5.5 percent (1,260 abortions). However, despite this drop, the percentage of those abortions that were taxpayer funded increased to 44.1 percent of women (556 abortions).

According to the Alaska Induced Termination of Pregnancy Statistics reports, which includes the total number of abortions covered by Medicaid, taxpayers paid $135,637 for abortions in 2015 and $153,208 in 2016.

Planned Parenthood, which currently ends the lives of about 900 preborn children a day, has made it clear that it supports state and federal taxpayer dollars for abortions, and works to challenge any and all abortion restrictions. As the Senate picks up the defunding debate, it would be wise for legislators to remember that the American people want the opposite of what Planned Parenthood wants.