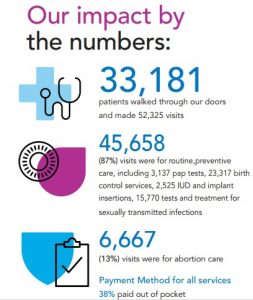 Despite the falling numbers, an analysis from a local media outlet determined that about 17.27 percent of patients and 11 percent of all visits were for abortion services in Arizona.  But, Data compiled by the Arizona Department of Health Services reveals that statewide, Planned Parenthood’s market share of abortion reached 53 percent in 2015.  According to Planned Parenthood of Arizona’s 2015-2016 annual report, they committed 6,667 out of the 12,655 abortions performed in the state.

This does not come as a surprise. Live Action News has reported multiple times that in state after state, Planned Parenthood is garnering a larger and larger share of the abortion market while increasing government funding.

Nationally, Planned Parenthood’s patients, as well as services in areas such as contraception, Pap tests, cancer screenings, and breast exams, have all decreased while government funding and abortions continue to rise. Opponents of forced tax payer funding of Planned Parenthood say that this is a good reason to shift the over $540 million tax dollars which Congress has handed out to Planned Parenthood annually to more worthy places such as Federally Qualified Health Centers (FQHC).

But, Planned Parenthood’s supporters argue that federal and state tax dollars should continue to flow to the abortion corporation because they are the only ones that can provide “contraception services.”

And while Planned Parenthood’s patients have been decreasing over the years, patients visiting federal health centers in Arizona increased from 356,094 in 2008 to 500,940 in 2015.

The Tempe, Arizona Planned Parenthood center is one of the centers Live Action called during the undercover investigation. When the caller asked to “make an appointment for prenatal care” the Planned Parenthood staffer responded:

Shortly after the release of the undercover video, Planned Parenthood began purging their websites of the term “prenatal.” Then, Live Action News, exposed biased Arizona media reporting on the topic.  Arizona’s media, as well as national media outlets, have failed to call out or question Planned Parenthood, which masquerades as a “health center” so they can continue to receive half a billion in federal tax dollars a year and end the lives of 900 preborn children every day.

But, the truth is hard to suppress and it is reaching the ear of Congress and the ear of the American public. If the drop in patients is any indicator, Planned Parenthood’s continued dedication to abortion is starting to have a real impact on the organization.

It’s no wonder, with so many patients abandoning Planned Parenthood, that they fight so hard to keep those government dollars.