Despite abortions in the State of Minnesota falling to the lowest number in 35 years of reporting, in 2015, taxpayer funded abortions in the state increased almost 11 percent, with Planned Parenthood performing the largest portion of those procedures.

State funded abortions are just one way that the taxpayer is being forced to fund the killing of preborn children. While federal dollars do not fund all abortions, Medicaid dollars sent to the states can fund abortions for any and all reasons a state chooses to allow them. To date, 17 states allow for some kind of taxpayer funded abortion. Minnesota is among them.

Last week, Live Action released a video detailing all the ways our tax dollars are paying for abortions, including state funds. Watch below:

In 2014, the Minnesota Health Department recorded 10,123 abortions in the state, with 3,858 abortions (38 percent) paid for under the state’s public assistance program.

By 2015, despite the numbers of recorded abortions decreasing to 9,861, taxpayer funded abortions climbed to over 4200 (43 percent).

“Medical assistance” for induced abortions and abortion-related services is available under the following conditions, according to the Minnesota Department of Human Services:

• The woman suffers from a physical disorder, physical injury, or physical illness, including a life-endangering physical condition caused by, or arising from the pregnancy itself that would, as certified by a physician, place the woman in danger of death unless the abortion is performed

• Abortion is being done for other health or therapeutic reasons

Notice that “other health or therapeutic reasons” is extremely broad and could include almost anything.

A report published in the Star Tribune claims that since 1995, when abortion advocates successfully challenged Minnesota’s law prohibiting public funding of most abortions, the state has paid roughly $24 million in reimbursements for abortions. 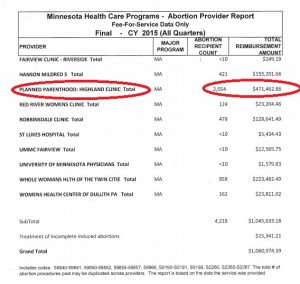 The pro-life organization, Minnesota Citizens Concerned for Life (MCCL), verifies this, stating, “taxpayers have paid $23,564,678 for a total of 77,389 abortion procedure claims.”

MCCL adds, “[T]axpayers’ 2015 portion (the latest available) was $1,045,633 for 4,218 abortions. Prior to the court decision, taxpayers were charged about $7,000 per year for about two dozen abortions in cases of rape and incest and to save the life of the mother.”

A summary of 2015 reimbursements linked at the MCCL website reveals that Planned Parenthood was reimbursed for the largest share of taxpayer funded abortions, with the Whole Woman’s Health abortion chain coming in a distant second.

…increased its state-funded abortion claims by 64 percent over the last six years. In 2012, the organization collected $255,000 from the state for performing 1,139 abortions on low-income women, a 30 percent revenue increase over the previous year.

Just a few years later in 2015, that number would nearly double. The document shows that Planned Parenthood’s abortion “reimbursements” increased over 80 percent from 2012.

Live Action News previously reported that Planned Parenthood is the leading abortion provider in Minnesota, committing half of the state’s reported abortions. The organization committed 5,048 of the reported 9,861 abortions in the state in 2015.

The Planned Parenthood center that performed the abortions is listed as a grant recipient of federal dollars through Title X.

Despite pro-abortion claims that taxpayer dollars only pay for “medically necessary” abortions, the majority of women in Minnesota said they chose the procedure simply because they did “not want children at this time” — and some of those were paid for by taxpayers. 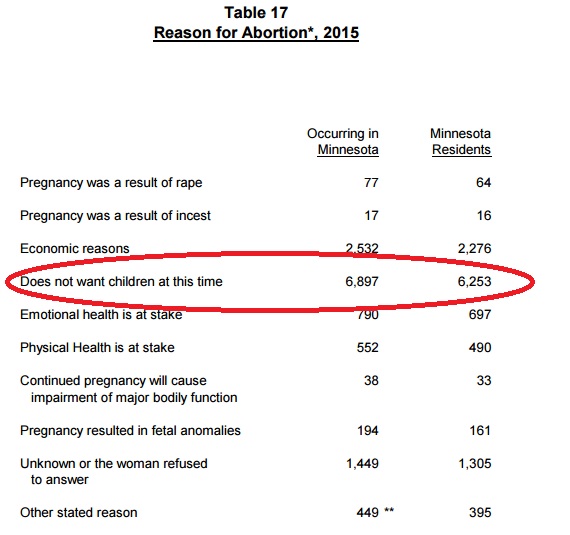 Minnesota data on the reasons women gave their abortions reveal that the overwhelming majority of abortions had nothing to do with rape, incest, life or health of the mother, or of the baby.

In fact, almost 70 percent (6,897) of women chose abortion because they simply did not want to have a child. This means that a portion of those abortions must have been paid for with state taxpayer funds.

The math is simple: Since there were 9861 abortions total abortions and 6897 were performed for women who did not want to have children, that leaves only 2964 left.

Live Action News has previously documented that states which allow for taxpayer funded abortions — California, Alaska, and now Minnesota — are seeing increases in these procedures, and in some instances this is occurring while overall abortion numbers are declining.

What this shows is that when a government agency funds abortions, taxpayers may end up footing the bill for more and more procedures each year. This is something the Senate should consider as they debate granting the nation’s largest abortion provider, Planned Parenthood, another half a billion taxpayer dollars.