This important fact was missing in a NorthJersey.com report on Planned Parenthood’s share of abortions in the state of New Jersey, which read in part:

Services at about 650 Planned Parenthood centers, including 26 in New Jersey, will be at risk if Congress follows through on proposals to “defund Planned Parenthood” and slash federal family-planning funding. The proposals include ending Medicaid reimbursement for any services patients receive at Planned Parenthood sites. Private insurance coverage for abortions also is at risk.

The online media outlet then used the very deceptive claim that abortion is just three percent of the services Planned Parenthood provides. From the report:

This claim has been used by media mouthpieces for Planned Parenthood, despite the fact that the Washington Post gave the misleading claim “Three Pinocchios,” and the liberal media outlet Slate called it “the most meaningless abortion statistic ever.”

As Live Action News has previously detailed, Planned Parenthood misleads the public in how they come to the three percent figure.

To get to this “small number,” the abortion corporation simply adds many items (referred to as “services”) together with abortion numbers. For example, if a patient comes to Planned Parenthood for an abortion but also receives a pregnancy test, birth control, and STD testing while there for her abortion, it gives the appearance that the abortion was only a small portion of the reason for her visit.

According to NJ.com, the state of New Jersey received $7.6 million in federal reproductive health funding in 2015, and Planned Parenthood received the lion’s share, at $5.2 million.

Past years of annual reports published by Planned Parenthood of Metropolitan New Jersey (PPMNJ) were reviewed by Live Action News, and reveal that while a number of legitimate health services at the NJ Planned Parenthood affiliate have decreased, abortions have actually doubled.

A breakdown of those services is listed below:

In addition, the second affiliate, Planned Parenthood of Northern, Central and Southern New Jersey, reported to NorthJersey.com that, in 2015 alone, they performed 7,241 abortions, including both medical and surgical procedures.

In spite of decreasing health services and the doubling of abortions at PPMNJ, federal dollars funneled to PPMNJ have remained relatively steady since 2013.

And, while the numbers of abortions rose at PPMNJ, statistics show that abortions have actually been decreasing statewide. In 2008, there were 54,160 abortions committed in the state.

According to a spokesperson at the New Jersey Department of Health, the state is only mandated to collect abortion reports from hospitals and licensed ambulatory care facilities — which could explain why in 2014 the state reported only 24,181 abortions to the Centers for Disease Control (CDC). However, the Guttmacher Institute, once referred to as Planned Parenthood’s “special affiliate,” collects data from several sources in the state, and their statistics indicate that abortions fell to 44,460 (4.8 percent of abortions reported nationwide) in 2014 — a 5 percent decrease from 2011. 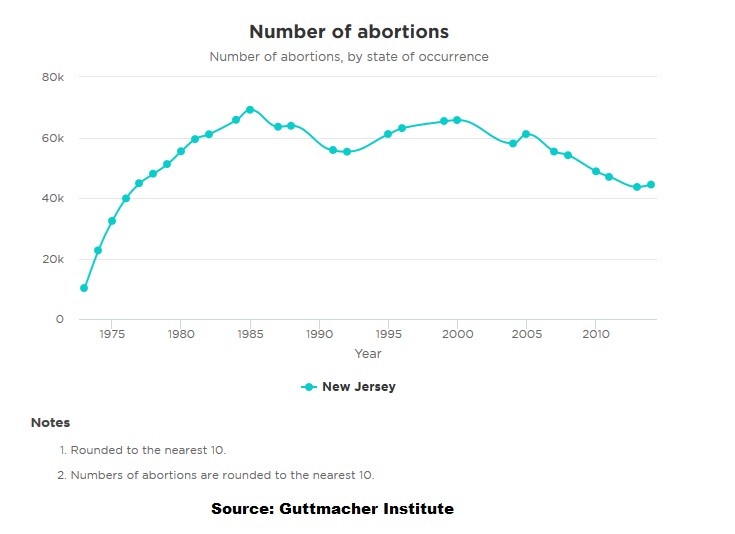 It is no secret how invested in abortion Planned Parenthood really is. The numbers do not lie. Live Action News recently documented that the organization’s abortion market share has increased over 325 percent since the early 1990s. And despite Planned Parenthood’s media mouthpieces collaborating to deceive the American taxpayer, Live Action has found: