The Department of Health and Human Services (HHS) announced on Wednesday that it has referred the University of Vermont Medical Center (UVMMC) to the U.S. Department of Justice (DOJ). The referral was made over an investigation into the hospital’s violation of conscience protection laws after a nurse was forced to participate in an elective abortion against her will in May of 2018.

The conscience protection laws UVMMC is said to be in violation of are known as the Church Amendments. OCR found that the hospital has refused to change its policies in order to prevent future coercion to participate in abortions as the nurse in question was forced to do.

According to OCR, the nurse at UVMMC was forced to take part in an elective abortion when she was sent to a procedure room for what she was told was a post-miscarriage D&C procedure. Her objection to partaking in abortions was well known at the hospital, but when she arrived the abortionist allegedly told her, “Don’t hate me.” She was forced to participate in the abortion or risk losing her job. After taking part in the abortion, she said she has been “haunted ever since.” OCR said the abortion was not for an emergency and “other staff was available.” In August 2019, HHS sent a Notice of Violation letter to UVMMC over the incident and the hospital’s refusal to alter its policies. 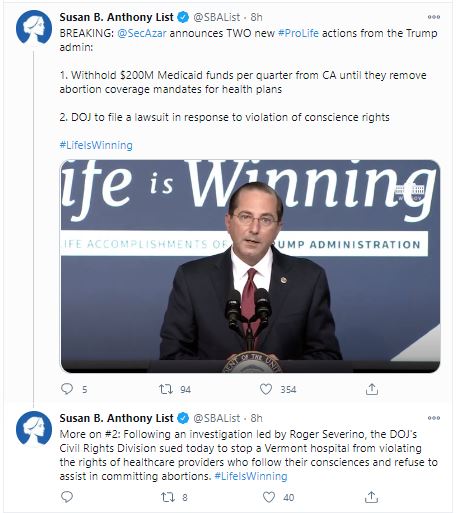 UVMMC was asked to align its policies to the Church Amendments and take other corrective actions as well, but the hospital refused to comply with federal law and the matter was referred to DOJ. DOJ has filed a lawsuit in the U.S. District Court for the District of Vermont on behalf of HHS to seek a court order that would require UVMMC to comply with the Church Amendments.

“OCR… found that UVMMC has discriminatory policies that assign or require employees to assist abortion procedures even after they have recorded their religious or moral objections to assisting in the performance of such abortions,” HHS said in a press release at the time.