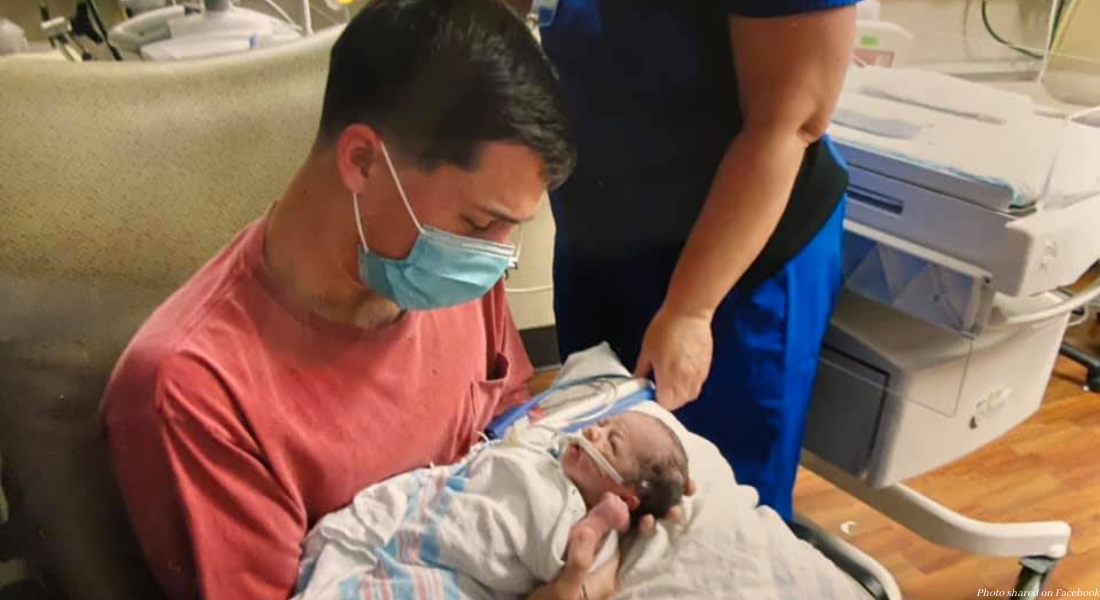 UPDATE 7/16/21: Brandon Russell, the husband who lost his pregnant wife and high school sweetheart Samantha in a car accident earlier this month, is speaking out about their newborn son Mac, how wife’s legacy, and the outpouring of generosity he has received.

“I am going to look at [Mac] every day and think of Samantha,” he told WSPA. “I think it’s important to talk about his mom and how wonderful and great she was because he is going to have some pretty high standards.”

He added, “At the end of the day, I am grateful I at least have Mac. I’m just grateful.”

Mac is still in the hospital, but Russell, a Kansas Air National Guard member, hopes he will be able to come home in about three weeks. He said the support received through a GoFundMe fundraiser will allow him to care for Mac and get him through school.

“Our house is packed full, and I was looking at the registry last night, and I think the only thing left was a little hat for him. Don’t get it, we can get it, but yeah, it’s just amazing,” he said. “We didn’t expect that kind of response from people all around the world just handing me money. I was not ready for that. I don’t think any of us were, and I don’t know how I could ever repay and just give my thanks.”

Russell also opened up about the last words the couple spoke to each other. “I had just got home from work, and she was in the kitchen making casserole, our favorite that we both enjoyed so much, we could probably eat the whole dish in one sitting,” he said. “I got home and decided I needed a nap and was going back to our room, and she said, ‘You’re not going to see me when you wake up, you’re not going to hug and kiss me,’ and I instantly turned around and hugged and kissed.”

He continued, “She says, ‘I shouldn’t have to ask for these things,’ like every wife does, but I had no idea that would be the last thing she told me.”

7/10/21: A pregnant mother was tragically killed in a car accident on July 6, but doctors were able to save her preborn baby boy.

According to news reports, Samantha Russell, 22, was at an intersection when an alleged thief who was fleeing police crashed into her car. Russell died on impact, but her 33-week-old preborn son Mac was saved and is in critical condition.

“Words cannot explain or express the emotions going through everyone’s head today in light of the events that took place on July 6, 2021 at around 5:30 CST,” wrote Russell’s husband Brandon, 21, on Facebook. “Sammy was taken from us, but left behind the most beautiful gift of life.”

He said that his wife “was going to be a fantastic mother” and “was the best person to know.”

Russell was due to give birth on August 21. Police had been attempting to arrest two robbery suspects, Javan Jermaine Ervin and Jaime P. Chavez, but called off the chase prior to Ervin crashing into Russell and two other vehicles. Ervin has been charged with first-degree murder in commission of a felony, aggravated battery, and criminal possession of a firearm, said KAKE. He had several robbery convictions in his past, and his last criminal sentence ended June 15.

“[Samantha] always ALWAYS knew what to say when I was going through an issue or needed advice,” wrote Brandon. “She was the best person I know. From her bubbly attitude and being all over the place to her knowing when it was couch-thirty and time to watch netflix. She was an all around good person who did not deserve to die on impact from a reckless driver. She was the best example of what it looks like to be happy. She showed happiness to everyone and anyone that she knew. She will always be my wife and the person I turn to when I need advice or to ask another one of my dumb questions. I love you Samantha Russell. You are everything to me.”

Brandon asked everyone to cherish their loved ones and live their lives to the fullest. A GoFundMe has been set up to help him care for baby Mac.