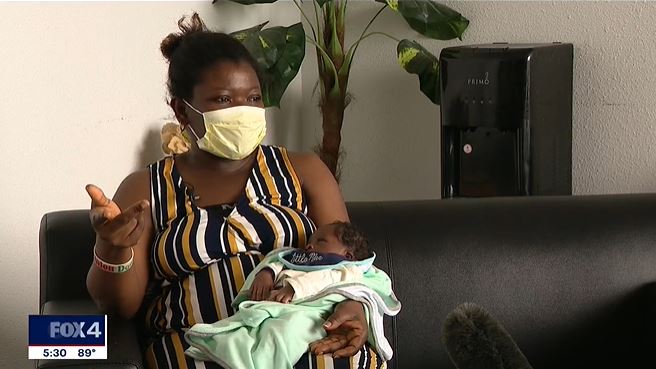 A nine-month pregnant mother who was shot while leaving a church in North Dallas in May is grateful to God for her miracle baby and the fact that they both survived the shooting. She returned to that same church this week to introduce her 10-day old son, whom she named Marvelous, and share the story.

“What God did for me that day is, oh my goodness, indeed God is marvelous,” Victoria Omisore told NBCDFW.

Omisore, who had moved to Texas from Nigeria four years ago in pursuit of a better life, was among a group of people leaving Praise Embassy Church on May 30 when two men began shooting at each other in the parking lot. Omisore was shot, but was able to pull her two young daughters and a friends’ two children to safety while calling 911.

READ: Heroic doctors save the lives of a pregnant mother and her baby

“I remember everything,” she said. “Everything. I just felt my left side. Something was cold and I felt this sharp movement of the baby just to [the] side. I just felt the blood gushing out.”

Omisore thought she was dying and that her water may have broken. After being rushed to the hospital, worried she had lost her baby, doctors discovered the bullet had narrowly missed her preborn son. It had also missed all of her major organs, and had lodged in her muscle. It was a miracle.

“God gives me the grace to see him alive. Because what happened that day, I don’t know? I was thinking maybe, he’s gone,” she said of her son.

Doctors decided it was safer to leave the bullet where it was. Later that day, she welcomed her baby boy Marvelous, weighing six pounds, eight ounces, and measuring 19 inches long. Prior to the shooting, she had already been considering the name Marvelous for her son, but his survival that day cemented the name for her.

“What God did for me that day is, oh my goodness, indeed God is marvelous,” Omisore said.

Police have yet to identify the two men involved in the shooting and are still seeking the public’s help. Texas law considers preborn children to be living human beings and there are penalties for causing harm to them.