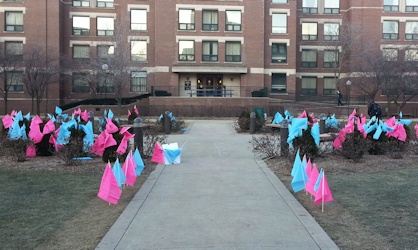 Would they punish a female student for naming her rapist?

Earlier this year, pro-life students at DePaul University organized a memorial for unborn babies who had been killed by abortion. Young Americans for Life (YAF) organized the memorial, which consisted of 500 blue and pink flags, and organized the display with the blessing of the university.

Stolen flags from the pro-life display that had been thrown away. Image via Youth Americans for Freedom.

The flags ended up being stolen and then discarded; in other words, the display was vandalized. Kristopher Del Campo, chairperson of DePaul’s chapter of Young Americans for Life, contacted public safety officials, who did an investigation into the incident. Thirteen students confessed to the crime, and DePaul’s assistant dean of students, Domonic Rollins, gave Del Campo a copy of the report. Del Campo then published the report, including the names of the students who vandalized the memorial, on the YAF website.

While it might seem obvious that the thirteen student-vandals would be the ones punished, that isn’t what ended up happening. Instead, it is Kristopher Del Campo who is being punished – for multiple alleged violations of the university code of conduct claiming that publishing the names of the vandals was “disorderly, violent, intimidating or dangerous,” could cause “significant emotional harm,” and constituted “bullying.”

So De Campo’s organization was subjected to a politically motivated crime, yet he is the one being punished?

The Foundation for Individual Rights in Education (FIRE) has taken up Del Campo’s case.

“Punishing a student for naming those who committed a crime against him or her sets a very dangerous precedent,” said FIRE’s Shibley. “For example, would DePaul punish a female student for telling her friends to avoid a person who admitted to sexually assaulting her?”

… “It is deeply distressing that at DePaul University a student can be labeled a potentially violent threat simply for speaking about the injustice his group suffered at the hands of his fellow students,” said Peter Bonilla, associate director of FIRE’s Individual Rights Defense Program. “Del Campo and his group are the victims of a crime, not the perpetrators. DePaul must quickly undo this grave injustice against student rights and basic notions of fairness and decency.”

The fact that this university – a Catholic university – would shield students who vandalized a pro-life display while punishing the student who merely named the students who confessed to the crime is abhorrent. These vandals aren’t innocent bystanders who did nothing and are being targeted by a vicious pro-life group seeking to destroy their reputations and college careers. They are criminals. These are students who committed a crime, seeking to silence a group whom they disagreed with. Del Campo was a victim in this situation who did nothing more than exercise his right to free speech, and now he’s found himself being intimidated and threatened for refusing to remain silent.

As FIRE pointed out, would they punish a female student for naming her rapist?

This case should not be allowed to stand, and concerned individuals can contact the university and demand that the charges be dropped.

Live Action News contacted DePaul University for a statement on this story, and they refused to comment.