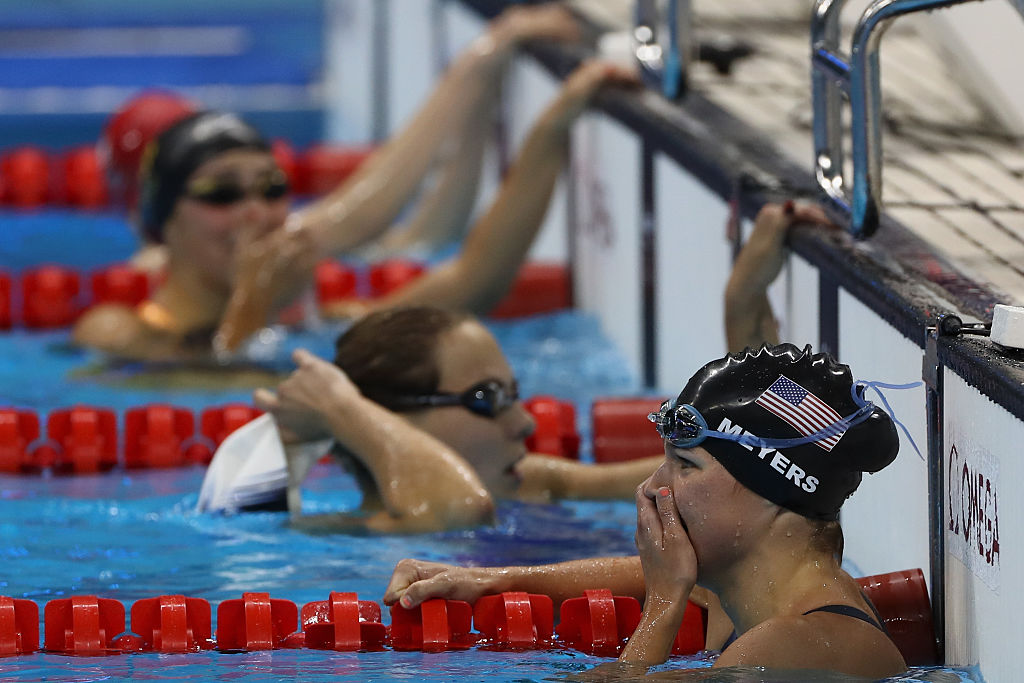 Becca Meyers, a star swimmer for the United States Paralympic Team, has won multiple medals in both the 2012 London and 2016 Rio de Janeiro Paralympic Games. Meyers, who is deaf and blind, has also received Best Female Athlete with a Disability ESPY Awards in two separate years, and has medaled at the Deaflympics as well. Yet she won’t be competing at this year’s Olympic Games in Tokyo, because she’s been denied the ability to bring an aide to help her navigate the Olympic Village.

Meyers, who has a genetic disorder called Usher syndrome, has been deaf since birth, and she also steadily lost her vision due to a disease called retinitis pigmentosa (RP). Her mother, therefore, serves as a personal care assistant (PCA), and Meyers had expected to be able to take her mother to help guide her through the Paralympics. But that straightforward and necessary request was denied, so Meyers felt she had no other choice: she withdrew from Team USA.

The Washington Post profiled her situation, starting with a terrifying experience she had in Rio de Janeiro in 2016. Frustrated, scared, and starving, Meyers had to be rescued by her parents because she wasn’t able to find her way to the dining area for athletes. She vowed she would never put herself in a situation like that again, but without a PCA, she would have no choice. She would either have to risk having that nightmare experience again or drop out.

“I would love to go to Tokyo,” Meyers told the Washington Post. “Swimming has given me my identity as a person. I’ve always been Becca the Swimmer Girl. I haven’t taken this lightly. This has been very difficult for me. [But] I need to say something to effect change, because this can’t go on any longer.”

In an interview with MSNBC, Meyers’ mother, Maria, explained what she needs to do to keep her daughter safe during international events like the Paralympics. “Every day, we’re a team; we work together,” she said. “From the time we get up, breakfast, walking to the car in the dark, in the middle of the winter to get to practice, it’s snowing, I’ve got her elbow, I get her to the car. When we get to the pool, it’s — like I said, we’re a team, together.”

Due to the COVID-19 pandemic, safety measures have been put into place. But for someone like Meyers, it leaves her vulnerable. Meyers, who can lip-read, can’t do so when people around her are wearing masks. Social distancing means she can’t hear or see the people around her, either, which is why she would rely even more on her mother, as her PCA, to be near her at all times, guiding her and keeping her informed of what’s going on around her. Meyers said the trust needed for that kind of situation is what makes her mother, as her PCA, so vital; she can’t just be substituted for a random person.

“She’s given her entire life for this. It’s unacceptable. It’s heartbreaking,” Maria Meyers said. “She is terrified to go [alone]. And I mean terrified — like, rolled up in a ball, shaking.”

Heartbroken to share that I’m withdrawing from the Tokyo Paralympic Games. The USOPC has repeatedly denied my reasonable and essential accommodation because of my disability, leaving me no choice. Full statement below: pic.twitter.com/p9tKsbPip2

The United States Olympic and Paralympic Committee (USOPC) has responded to the media firestorm surrounding Meyers’ withdrawal by claiming they aren’t allowed any non-essential personnel, therefore reducing the size of their delegation to Tokyo. They also said there is a dedicated PCA for the Paralympic swim team, plus 10 other people serving as coaches and staff. That would mean just 11 people would be responsible for 34 swimmers, many of whom — like Meyers — require one-on-one assistance.

READ: Denied a heart transplant because of Down syndrome, her family is ensuring this doesn’t happen to others

There is suspicion that this decision, by the USOPC, is rooted in ableism. Golfers, for example, are allowed to bring individual caddies as essential personnel, while grooms who attend to horses in equestrian events are also permitted. Yet PCAs for athletes with disabilities are banned.

“This is the Paralympics. We should be celebrating everyone’s disabilities,” Meyers said. “We’ve broken barriers in society, defying all odds. And yet this is how we’re treated? Like a burden on the team?”

For Maria Meyers, her solution to making officials understand is simple. “I’d love to wrap something around their eyes and stick something in their ears,” she said, “and drop them in the middle of the [Olympic] Village and say: ‘Okay, now get yourself to the pool. Good luck.’”