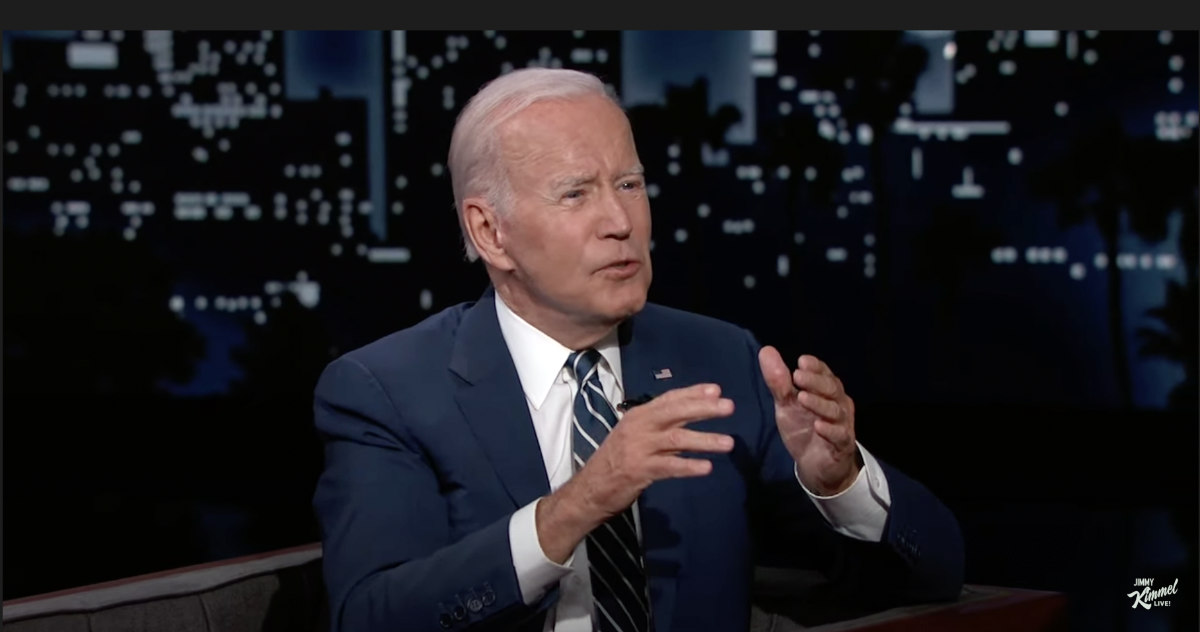 On the heels of an assassination attempt against Supreme Court Justice Brett Kavanaugh, President Joe Biden appeared on Jimmy Kimmel Live, where he made comments using language identical to militant pro-abortion groups who have been threatening towards the pro-life movement.

In Biden’s first appearance on network television in over 100 days, he spoke about gun control and the economy before pivoting to talk about abortion. Biden, who regularly talks about his self-proclaimed Catholic faith, is an ardent supporter of abortion. He began his discussion on abortion by noting the possibility of codifying Roe into federal law. “I think if the court overrules Roe v. Wade, and does what its draft… well, if that occurs, I think we have to legislate it,” he said. “We have to make sure we pass legislation making it a law, that is, the federal government says this is how it works.”

He followed that up by suggesting, along with Kimmel, that Roe’s fall could threaten much more than abortion — like access to birth control and same-sex marriage. Biden told Kimmel, “And it’s just going to be the beginning, by the way. You know, there used to be a case called Connecticut vs. Griswold. Connecticut vs. Griswold said you could not use contraception in the privacy of your own bedroom, because in the Constitution, there was no right to privacy. And so, they could outlaw it, and if you used contraception, it was against the law. You couldn’t purchase it. There’s a whole range of things that are at stake here, when we talk about eliminating Roe v. Wade.”

This, however, is something Supreme Court Justice Samuel Alito’s leaked draft opinion specifically refuted. He wrote, “We emphasize that our decision concerns the constitutional right to abortion and no other right. Nothing in this opinion should be understood to cast doubt on precedents that do not concern abortion.”

After this, Biden’s verbiage took on a more threatening tone.

“It’s just ridiculous. And I don’t think the country will stand for it,” he said. “But what I think we’ll have to do… there are some executive orders I could employ. We believe — we’re looking at that right now. It’s clear that, if, in fact, the decision comes down the way it does, and these states impose the limitations they’re talking about, it’s going to cause a mini-revolution and they’re going to vote all these folks out of office.”

These are not empty words; while Biden may or may not have been referring to a “mini-revolution” at the ballot box alone, already, abortion supporters have been executing a wave of violence and terrorism across the country. The language Biden used is also being used by pro-abortion activists, who have promised a “summer of rage,” along with “revenge” and “revolution.”

Pro-life offices and pregnancy centers, as well as churches, have been firebombed and vandalized, while pro-life activists, including minors, have been assaulted. And as has been reported by various media outlets, the recent assassination attempt on Justice Kavanaugh was specifically due to the potential overturning of Roe — after pro-abortion groups like Ruth Sent Us doxxed the pro-life justices and published their home addresses on the internet.

Other politicians, like Senate Majority Leader Chuck Schumer (D-N.Y.), have likewise used threatening language toward Supreme Court justices. Schumer singled out Kavanaugh, along with Justice Gorsuch, at an abortion rally, shouting, “You have released the whirlwind, and you will pay the price! You won’t know what hit you if you go forward with these awful decisions.”

Biden’s echoing of the language used by militant, violent pro-abortion groups, especially just one day after the attempted murder of a sitting Supreme Court justice, seems irresponsible at best.