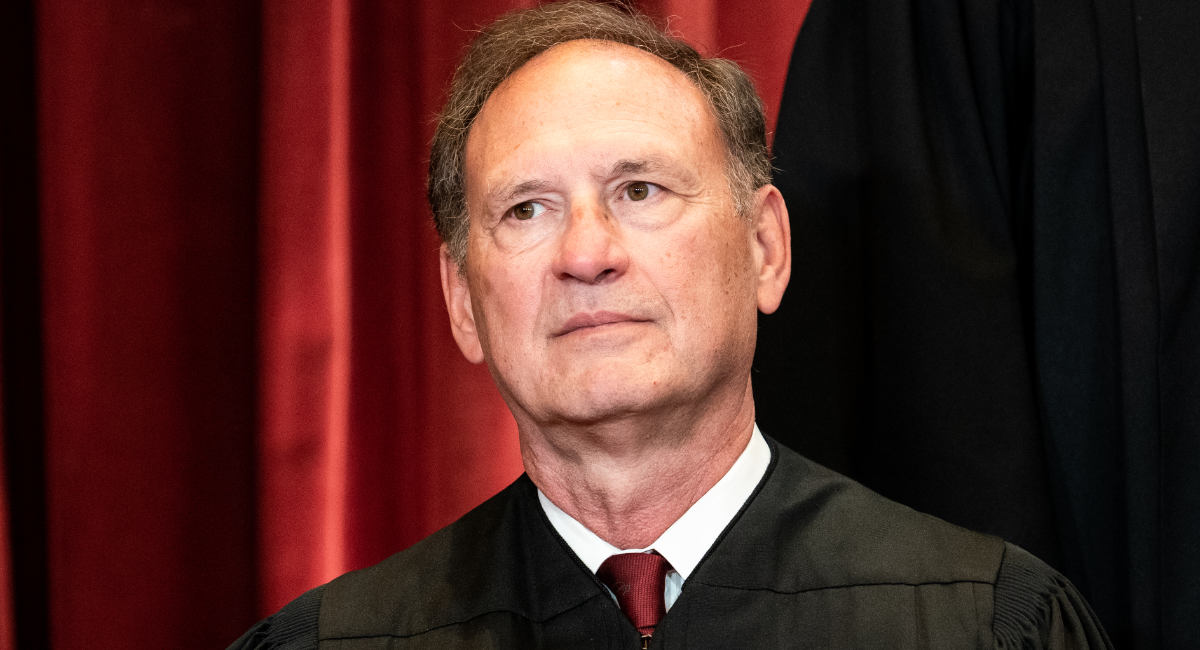 Supreme Court Justice Samuel Alito was pointed in his critique of the 1973 Roe v. Wade ruling which overruled all state laws at the time and established a so-called ‘right’ to abortion nationwide. In his leaked first draft of the Supreme Court’s alleged majority opinion in the Dobbs v. Jackson Women’s Health Organization case, the Justice called Roe “egregiously wrong from the start,” emphasizing that the U.S. Constitution does not confer a right to abortion.

Alito noted that the Fourteenth Amendment, which the deciding Justices in Roe relied upon for the so-called “right to privacy,” does not protect abortion as a right.

Historically, Alito noted, abortion was a criminal act and killed a living human being. The Court’s decision in Roe, Alito alluded, short-circuited the democratic process, and therefore must be overruled. Below are a series of categorized quotes from Alito’s draft opinion.

The Constitution does not confer a right to abortion

“The Constitution makes no express reference to a right to obtain an abortion, and therefore those who claim that it protects such a right must show that the right is somehow implicit in the constitutional text.” (page 9)

“Roe, however, was remarkably loose in its treatment of the constitutional text.” (page 9)

“We therefore hold that the Constitution does not confer a right to abortion. Roe and Casey must be overruled, and the authority to regulate abortion must be returned to the people and their elected representatives… procuring an abortion is not a fundamental constitutional right because such a right has no basis in the Constitution’s text or in our Nation’s history.”  (page 65)

Abortion was not permissible under common law

“Until the latter part of the 20th century, there was no support in American law for a constitutional right to obtain an abortion. Zero. None. No state constitutional provision had recognized such a right. Until a few years before Roe was handed down, no federal or state court had recognized such a right. Nor had any scholarly treatise of which we are aware… Not only was there no support for such a constitutional right until shortly before Roe, but abortion had long been a crime in every single state…” (page 15)

“ … In sum, although common law authorities differed on the severity of punishment for abortions committed at different points in pregnancy, none endorsed the practice. Moreover, we are aware of no common law case or authority, and the parties have not pointed to any, that remotely suggest a positive right to procure an abortion at any stage of pregnancy.” (page 19)

“The inescapable conclusion is that a right to abortion is not deeply rooted in the Nation’s history and traditions. On the contrary, an unbroken tradition of prohibiting abortion on pain of criminal punishment persisted from the earliest days of the common law until 1973.” (pages 24-25)

“Roe was egregiously wrong from the start. Its reasoning was exceptionally weak, and the decision has had damaging consequences. And far from bringing about a national settlement of the abortion issue, Roe and Casey have inflamed debate and deepened division.” (page 6)

“Roe was egregiously wrong and deeply damaging. For reasons already explained, Roe’s constitutional analysis was far outside the bounds of any reasonable interpretation of the various constitutional provisions to which it vaguely pointed.” (page 40)

“Roe was on a collision course with the Constitution from the day it was decided, and Casey perpetuated its errors, and the errors do not concern some arcane corner of the law of little importance to the American people.” (page 40)

Roe “was more than just wrong. It stood on exceptionally weak grounds.” (page 41)

“The weaknesses in Roe’s reasoning are well-known. Without any grounding in the constitutional text, history, or precedent, it imposed on the entire country a detailed set of rules much like those that one might expect to find in a statute or regulation.” (page 42)

“What Roe did not provide was any cogent justification for the lines it drew… And the Court did not explain why it departed from the normal rule that courts defer to the judgements of legislatures in ‘areas fraught with medical and scientific uncertainties.’” (page 46)

People have right to vote on abortion

“The Court has no authority to decree that an erroneous precedent is permanently exempt from an evaluation under traditional stare decisis principles… This Court’s inability to end debate on the issue should not have been surprising. This Court cannot bring about the permanent resolution of a rancorous national controversy simply by dictating a settlement and telling people to move on.” (page 65)

“It is time to heed the Constitution and return the issue of abortion to the people’s elected representatives.” (page 6)

“Rather, wielding nothing but ‘raw judicial power’ the Court usurped the power to address a question of profound moral and social importance that the Constitution unequivocally leaves for the people… The Court short-circuited the democratic process by closing it to the large number of Americans who dissented in any respect from Roe. (page 40)

“Our decision returns the issue of abortion to those legislative bodies, and it allows women on both sides of the abortion issue to seek to affect the legislative process by influencing public opinion, lobbying legislatures, voting, and running for office… It is noteworthy that the percentage of women who register to vote and cast ballots is consistently higher than the percentage of men who do so.” (page 61)

Fourteenth Amendment does not protect a right to abortion

“We hold that Roe and Casey must be overturned, The Constitution makes no reference to abortion, and no such right is implicitly protected by any Constitutional provision including the one on which the defenders of Roe and Casey now chiefly rely – the Due Process Clause of the Fourteenth Amendment.” (page 5)

“Instead, guided by the history and tradition that map the essential components of our Nation’s concept of ordered liberty, we must ask what the Fourteenth Amendment means by the term ‘liberty.’ When we engage in that inquiry in the present case, the clear answer is that the Fourteenth Amendment does not protect the right to an abortion.” (page 14)

“By the time of the adoption of the Fourteenth Amendment, three-quarters of the states had made abortion a crime at any stage of pregnancy, and the remaining states would soon follow.” (page 15) “Roe either ignored or misstated this history, and Casey declined to reconsider Roe’s faulty historical analysis. It is therefore important to set the record straight.” (page 16)

“Not only are the respondents and their amici unable to show that a constitutional right to abortion was established when the Fourteenth Amendment was adopted, but they have found no support for the existence of an abortion right that predates the latter part of the 20th century – no state constitutional provision, no statute, no judicial decision, no learned treatise. The earliest sources called to our attention are a few district court and state court decisions shortly before Roe and a small number of law review articles from the same time period.” (pages 25-26)

“These attempts to justify abortion through appeals to a broader right to autonomy and to define one’s ‘concept of existence’ prove too much. Those criteria, at a high level of generality, could license fundamental rights to illicit drug use, prostitution, and the like.” (page 32)

Roe’s trimester framework was invented by the Court, and the viability rule was arbitrary

“This elaborate scheme [trimester framework] was the Court’s own brainchild. Neither party advocated the trimester framework; nor did either party or any amicus argue that ‘viability’ should mark the point at which the scope of the abortion right and a State’s regulatory authority should be substantially transformed.” (page 43)

“The viability line, which Casey termed Roe’s central rule, makes no sense, and it is telling that other countries almost uniformly eschew such a line. The Court thus asserted raw judicial power to impose as a matter of constitutional law, a uniform viability rule that allowed the States less freedom to regulate abortion than the majority of western democracies enjoy.” (page 49)

Abortion destroys a human being

“What sharply distinguishes the abortion right from the rights recognized in the cases on which Roe and Casey rely is something that both decisions acknowledge: Abortion destroys what those decisions call ‘potential life’ and what the law at issue in this case regards as the life of an ‘unborn human being.'” (page 32)

“Some have argued that a fetus should not be entitled to legal protection until it acquires the characteristics that they regard as defining what it means to be a “person.”… By this logic, it would be an open question whether even born individuals, including young children or those inflicted with certain developmental or medical conditions, merit protection as “persons.” (page 47)

Roe must be overturned

“In this case, five factors weigh strongly in favor of overruling Roe and Casey: the nature of their error, the quality of their reasoning, the ‘workability’ of the rules they imposed on the country, their disruptive effect on other areas of the law, and the absence of concrete reliance.” (page 39)

“We end this opinion where we began. Abortion presents a profound moral question. The Constitution does not prohibit the citizens of each state from regulating or prohibiting abortion. Roe and Casey arrogated that authority. We now overrule those decisions and return that authority to the people and their elected representatives.” (page 67)