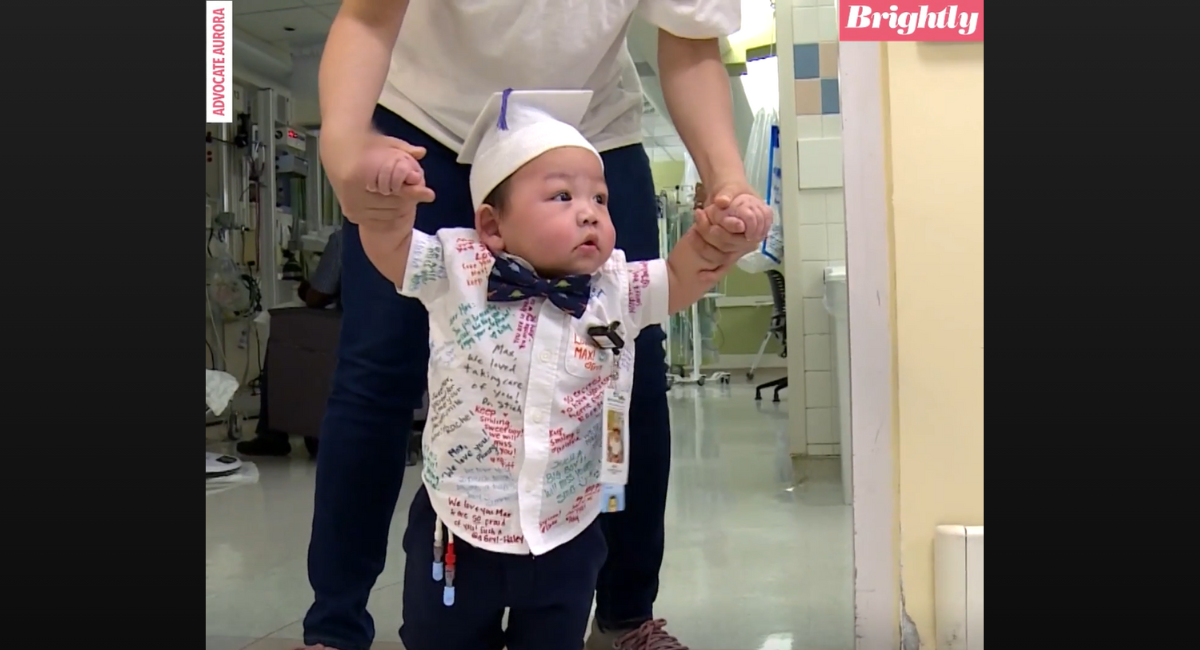 A premature baby boy with a rare genetic condition has been discharged from the hospital shortly before his first birthday.

According to Good Morning America, Max Do spent 11 months in the neonatal intensive care unit (NICU) at Advocate Children’s Hospital in Illinois. Max has such a friendly, outgoing personality that an occupational therapist who worked with him nicknamed him the “Mayor of the NICU.”

“He commands a lot of attention in there because he’s [a] very excited little guy,” said Dr. Michael Cappello, neonatologist and vice chairman of pediatrics at the hospital.” He always wants to say hi, he waves, he smiles and it’s hard not to go over and say hi to him, even when you’re not taking care of him at the moment. So he definitely is the mayor of the NICU.”

Max’s parents, Kim Nguyen and Dan Do, were already parents to one child when they learned during her pregnancy that Max’s stomach was distended and doctors weren’t sure why.

“When she was pregnant, we saw [in] the ultrasound that Max’s stomach was already getting distended, and they saw that amniotic fluid was not going in and out of Max the way it should be and, as a result, Kim’s stomach was getting bloated up, really rapidly,” Do said.

Max was born prematurely at 31 weeks via emergency C-section on June 4, 2021, but doctors were still stumped as to what was going on with him. His stomach was still distended, which Cappello said would usually indicate a bowel obstruction, but doctors learned it was actually due to the presence of extra fluid. After running blood and genetic tests, they learned he had congenital sodium diarrhea.

“This was caused by a mutation in a gene that regulates the process of how much sodium and water goes into the intestine,” Cappello said. “He is the only person in recorded history to have on that gene that particular mutation.”

READ: Man reunites with birth mom after 20 years: ‘It was a dream come true’

Cappello explained that Max loses sodium and water in his intestines so quickly that he is fed through a central line to prevent dehydration and to help him grow properly. The condition can be long-term and life-threatening, and Max could suffer from severe dehydration, electrolyte imbalances, and cardiac arrhythmia. While Max is the only person known to have this particular variant on this gene, there are 15 other people known to have a different mutation on that same gene, according to GMA.

Max had four major surgeries in the first two months of his life, and his father said, “It felt like surgery after surgery.” In fact, Max’s family was afraid they were going to lose him because of the number of procedures he endured and an entire week he spent almost unconscious.

“Even though he wasn’t responding and playing with us, I think just being by his bedside, it [gave] us some peace,” Do said.

Finally, after a year of intensive care at the hospital, Max was doing well enough to go home. On May 23, about two weeks ahead of his first birthday, doctors said he could finally be discharged and join his parents and big sister, Ivy, at home.

“He took every curveball thrown at him and he knocked it right out of the park,” Cappello said.

His parents say that Max is a happy baby and loves being around people. He is even walking and babbling now. They hope that sharing his story can give hope to other NICU parents. So far they have been contacted by one parent who has a daughter with the same condition and they hope to build a community to share ideas on how to care for and help their children. For now, Max is doing very well.

Cappello predicts, “Everything is going to be an adventure and exciting for this little guy.”