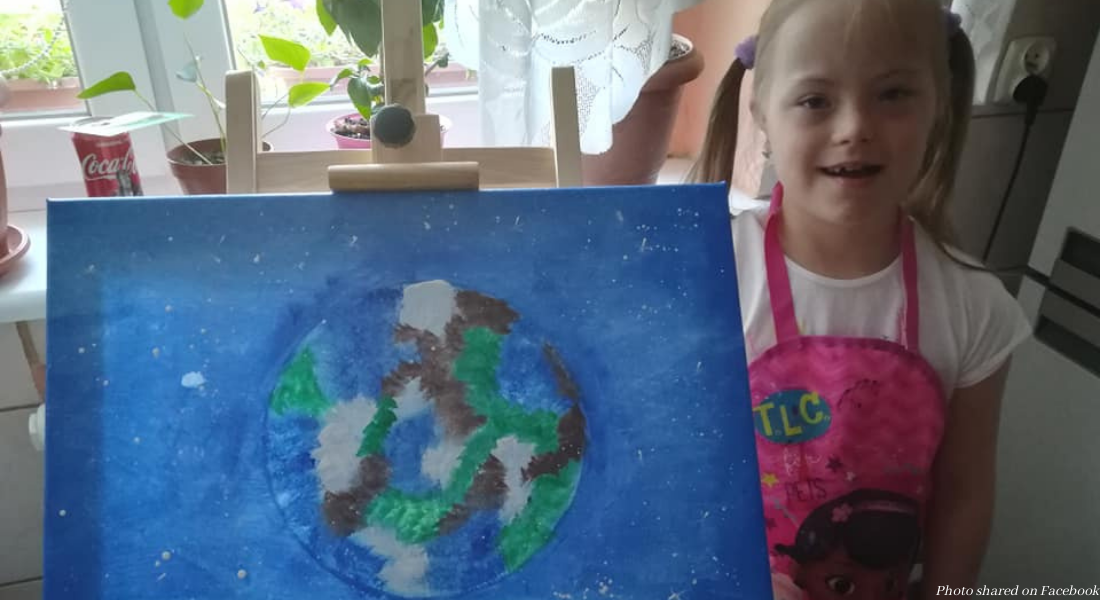 Twelve-year-old Wanessa Bąkowska, who has Down syndrome, lives in Lipka, Poland, and was recently thrilled to receive an official reply from Queen Elizabeth after sending her one of her paintings. Though Wanessa is happy and thriving now, it’s a far cry from where she started: abandoned because of her disability.

As an infant, Wanessa was abandoned, after her biological parents decided they didn’t want to raise a child with Down syndrome. But by the time she was 22 months old, she was adopted by Karolina and Alan Bąkowska, who spent months researching and learning about Down syndrome so they could be the best parents possible for Wanessa. Today, she’s a happy preteen girl with siblings she adores. She goes to school and has become a thriving artist.

Wanessa loves painting and incorporates different materials into the making of her artwork. And she’s become quite prestigious for her age: the Labirynt Gallery in Piła hosted an exhibition of her works in August, and one of her paintings was shown at the Great Gala of Integration at the National Theatre in Warsaw last year. With the help of her teacher, identified as Mrs. Anetka, Wanessa decided to send one of her paintings, titled “Earth,” to none other than Queen Elizabeth II of the United Kingdom.

In her letter to the queen, Wanessa wrote:

Your Majesty, my name is Wanessa and I am 12 years old. I live in Poland, in the small town of Lipka.

I have wonderful teachers and many friends. I have mum Karolina, dad Rafał, brother Alan and sister Nutka.

I love them very much. I am a person with a disability and Down Syndrome. Nevertheless, I paint pictures.

I would like to give you one of them, Your Majesty.

The title of this painting is ‘Earth’. Greetings from Poland.

And then, Wanessa got something she never expected: an official reply.

Written by Lady Elizabeth Leeming, the Queen’s lady-in-waiting, the letter thanked Wanessa for the thoughtful gift of a “splendid” oil on canvas painting. “The Queen was most touched by your wish to tell her a little about your life in Poland and greatly appreciates the care taken to create your picture entitled Earth,” Lady Elizabeth wrote. “I am to thank you very much, once again, for your thoughtfulness in taking the time to write as you did and send my good wishes to you for the future.”

Her mother, Karolina, posted a photo of the letter on Wanessa’s Facebook page, writing, “Dreams are meant to be fulfilled. Today I got a reply to my letter from Queen Elizabeth.”

Though Poland is a largely pro-life country, until recently, almost every child who received a prenatal diagnosis there was aborted. Other children who survived birth were reportedly left to die. Yet Poland recently passed a law banning eugenic abortions, giving children like Wanessa a better chance at life — and, like Wanessa, the chance to make the world a better place.