Abortionist Leah Torres is notorious for her outspoken, often inflammatory, arguments in support of abortion. For Torres, there is evidently no regulation or restriction on abortion that she would ever be willing to support, even abortion at eight months pregnant. And not only does she support late-term abortion, Torres recently insisted that anyone who calls themselves “pro-choice” can only be so if they likewise support late-term abortion.

It started with a conversation about abortion at eight months, in which Torres tweeted her support for late-term abortion. Iranian-Australian journalist Rita Panahi then responded, “I’m pro-choice but there’s no justification for abortion at 8 months when the child could be born alive.”

Torres then retorted that Panahi was not truly “pro-choice.” 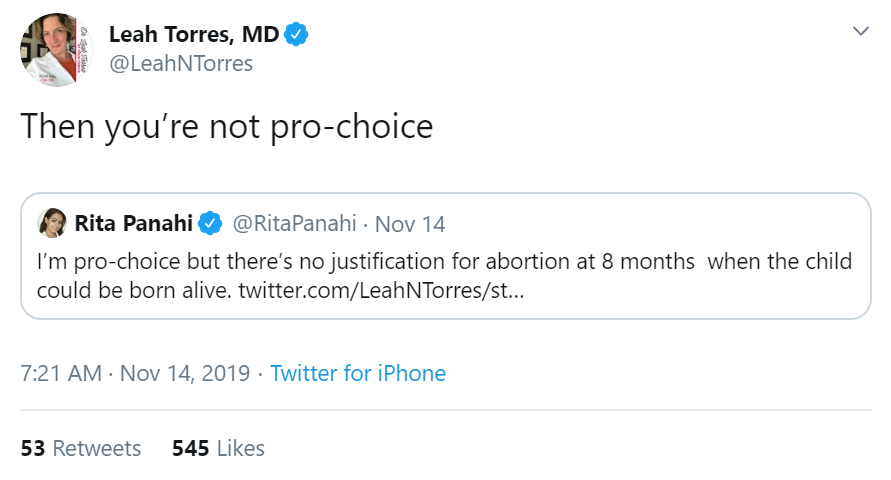 READ: Abortionist likens miscarriage to abortion: ‘God performs more than I do’

The problem with Torres’ flippant response is that, by her benchmark, most Americans are not “pro-choice.” It is true that a slight majority of Americans want abortion to remain legal; however, the overwhelming majority favor heavy restrictions — including on late-term abortion. In fact, according to Gallup, just 13 percent of Americans want abortion legal in the last three months of pregnancy. Less than 30 percent support legal abortion in the second trimester, which indicates that Torres is the one with the extreme position. And when you consider what late-term abortions involve, that’s not surprising.

The most common second trimester abortion procedure is a D&E (dilation and evacuation) procedure. This procedure, which takes multiple days, begins when the abortionist inserts laminaria sticks into the woman’s cervix to induce dilation. One to two days later, the mother returns to the abortion facility, where her cervix is further dilated. The abortionist then empties her womb of amniotic fluid, and then uses a sopher clamp to literally rip the baby apart, limb from torso. It’s a violent procedure, committed at a time when the preborn child can almost certainly feel pain, and carries significant risks for the mother.

And while Torres — along with other abortion advocates — frequently try to claim that these late-term abortions are recommended in case of a medical emergency, this, too, is false. The fact is, abortion is never medically necessary. In an emergency situation, where the mother’s life is at immediate risk and the baby needs to be delivered, an OB/GYN is not going to take a chance on committing a procedure which takes several days. The doctor will, in those cases, induce labor or perform a c-section — neither of which are abortions.

Torres previously claimed that “God performs more [abortions] than I do,” and has said that preborn babies can’t scream, because she cuts their cords first. Clearly, she doesn’t represent the mainstream opinion of the American people.