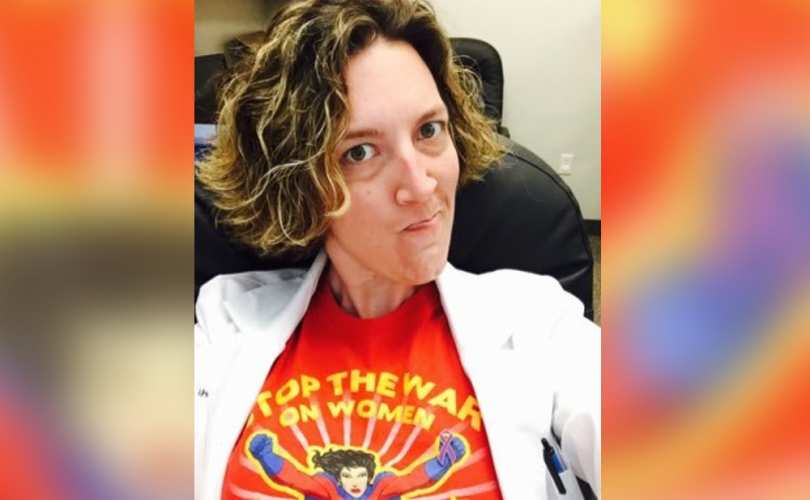 Planned Parenthood abortionist Leah Torres’ now infamous tweet this week further reveals the callousness of the abortion corporation. Torres, who is a Planned Parenthood abortionist at its Metro Health Center in Salt Lake City, Utah, wrote that “fetuses can’t scream” because she reportedly cuts the cord of the child first “so there’s really no opportunity,” even if the baby’s larynx is developed.

Torres is also listed as an abortionist for the Rocky Mountain Women’s Health Center. She has also been a vocal critic of pro-lifers, whether in her ongoing blog or in various media outlets where she is quick to write columns defending her practice of killing preborn babies. 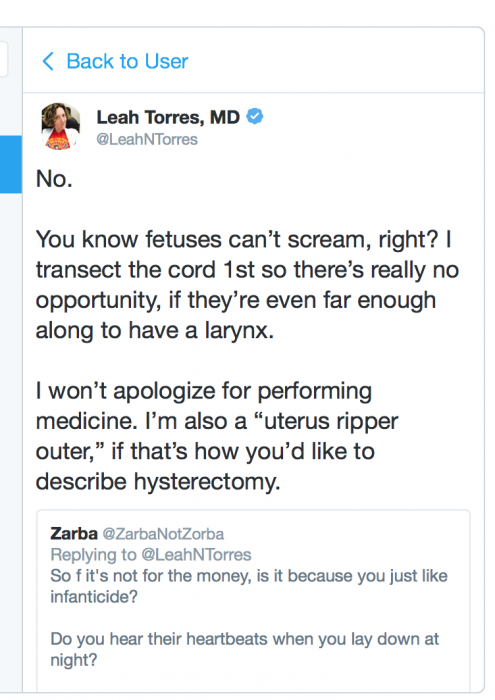 While her tweet wasn’t clear on which cord she was referring to regarding transecting, either the umbilical cord, the vocal cord, or the spinal cord, the statement is horrific; however, it is not new for Torres. Ensuring a baby isn’t born alive is something Torres has written about in the past, when she also proudly proclaimed her work “euthaniz[ing]” preborn babies. She wrote in 2013 (emphasis added):

Even in cases of 3rd trimester abortion, the fetus is euthanized. This is not only due to the Partial-Birth Abortion Ban Act, but it is also humane medicine. It would be very traumatic to the mother, father (if present), and caregivers (physicians, nurses, etc) if during the induction of the abortion the baby were born alive then left to die. How horrific! Despite popular opinion, we are not monsters. We are physicians who seek to minimize the trauma of this difficult decision. In the rare cases of 3rd trimester abortions that are most commonly performed because of severe, lethal fetal anomalies that would not allow the newborn to live for very long (and suffer significantly if/while it did live), the fetus is euthanized and therefore not born alive.

Former abortionist Dr. Anthony Levatino explains this procedure in the video below:

Torres’ disconnect between how she is actually responsible for killing a viable baby is astounding. To see euthanasia as the “humane” option to prevent “trauma” to the parents if the baby is born alive only reinforces the way Torres thinks.

Torres later deleted her now infamous tweet, which caused reactions far and wide, but said she did it to help further “progress”:

My friend asked me to. See, the thing is, she is trying to open dialogue between “pro-life” and “pro-choice” here in Australia, for the greater good of reproductive health.

Folks allowed the post to inhibit progress, so, it’s off my feed.

While it’s a bit unbelievable that a woman so bold as Torres would just delete a tweet out of consideration for a friend, rather than sticking by her words, it’s obvious that either way she’s received massive backlash, as later tweets have her defending her deleted post, commenting that people are “misinterpreting” and “misrepresenting” her meaning. She resorts to fallacies of logic to defend herself as well. One of Torres’ followup tweets said:

I thank you, my friends, for your continued support as well as correcting the misinterpretation of my post.

If you are someone who thinks I’m evil, it also means you think pregnant people are commodities to be used for gestation.

*That* is evil. And ghoulish. And sick.

Of course, seeing abortion as an evil act doesn’t make a person view pregnant women as “commodities,” but she needs to find some way to justify her reprehensible comments. However, Torres has a longstanding history of egregious defense of ripping babies from the womb.

In fact, David Daleiden, The Center for Medical Progress project lead, actually said that CMP didn’t investigate Planned Parenthood of Utah because “their abortion doctors were the only ones who actually scared [him].”

CMP didn’t end up doing an undercover site visit of @ppacutah in part because their abortion doctors were the only ones who actually scared me. Thanks @LeahNTorres for the very honest reminder. #PPSellsBabyParts #ShutThemDown https://t.co/fxy4u9d6ww

While Daleiden doesn’t say outright that Torres was one of those scary abortionists, his comment this week in response to her tweet implies he encountered her in the CMP undercover investigations. And it’s no wonder, based on the things Torres has said and written over the years.

As Live Action has previously reported, Torres has a history of lauding abortion. When the CMP videos were released, she penned a piece in which she defended the videos. As Adam Peters reported then:

Shot with hidden cameras, the footage shows Planned Parenthood executives meeting with individuals they believe are fetal tissue purchasers. While Planned Parenthood president Cecile Richards admits the tone her employees used was “unacceptable,” Dr. Torres says that she didn’t “perceive anything shocking” when watching the videos. According to her, the officials sounded “professional.” (This is coming from a woman who has stated on Twitter that preborn children, even up to the day of birth, are incapable of feeling pain.)

Torres doesn’t specify what the most professional sounding moment was. Perhaps it was nine minutes and forty two seconds into the fifth video; that’s when a potential buyer asks if there are any “fresh specimens” he can look at.

Torres has an extensive history of twisted abortion views. This abortionist actually claims she saves lives:

.@DLoesch There you go again. You make assumptions and you do not read carefully. Abortions save women’s lives. Period. Every. Single. Time.

But in order to “save women’s lives,” she deliberately kills their children. While Torres makes it clear she transects the cord while the baby is still in the womb, in order to prevent him or her from being born alive and then killed, there’s not a lot of difference between what she does in a late-term abortion and what Kermit Gosnell did when he delivered babies alive and cut their spinal cords. While one may technically be legal, the result in both is a viable child who has a life-giving cord cut in two, all in the name of choice.