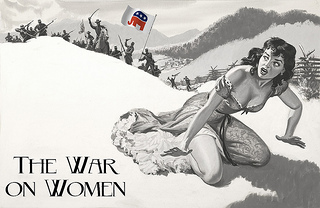 Last night, a report surfaced suggesting that Live Action was b

The reports were met by media inquiries to the Live Action office and questions about our alleged involvement in the “sting.”

As the nation’s biggest abortion business, Planned Parenthood kills more than 320,000 pre-born children every year in America. Women deserve better than Planned Parenthood’s radical abortion-first ideology that puts abortion before protecting sex-trafficking victims, rape survivors, and other women in vulnerable situations. Planned Parenthood fights to remove every abortion limitation and regulation, and now receives nearly half of its billion-dollar budget from the government.

Live Action’s investigative work exposes this violent agenda which kills the most defenseless among us, hurts women and girls, and undermine human dignity.  If Planned Parenthood was suspicious of Live Action as they claim and stand by everything they said in recent encounters, they should have filmed the encounters themselves and release them publicly. The truth is, the leader of the abortion industry repeatedly reveals their radical abortion-first mentality in Live Action investigations, putting vulnerable women and children at risk.

In addition, Planned Parenthood is deeply embedded in the political system for the purpose of getting even more taxpayer dollars and squelching legitimate federal and state investigations and defunding efforts. Will Planned Parenthood have a list of demands for President

Obama if he is re-elected? What is Planned Parenthood’s lobbying relationship with the Obama White House? Is one of Planned Parenthood’s goals to mandate taxpayer funding of abortion, repealing the bi-partisan Hyde Amendment? Does the President, like Planned Parenthood, oppose all limits and regulations on abortion? The public deserves to know. Fundamental human rights are at stake.

“Live Action’s mission is to expose practices that endanger the most vulnerable among us. Just like investigative reporters at ABC, NBC and CBS who often go undercover to expose fraud, abuse, and other unethical practices, Live Action often uses undercover methods toexpose harmful practices. We value the freedom of the press and reporters, and our right to speak out against these harmful practices. Live Action has been investigating Planned Parenthood, the nation’s largest abortion group, for over five years and has exposed sexual abuse cover up, the facilitation of sex trafficking, medical misinformation, false statements made by executives, and now extreme abortion-first political strategies at their clinics and offices.” – Live Action President Lila Rose

“As the nation’s largest abortion group, Planned Parenthood facilitates the killing of more than 320,000 pre-born children every year in America. Women deserve better than the radical pro-abortion ideology that puts abortion above the protection of sexually trafficked victims, rape survivors and other women in very vulnerable situations. Planned Parenthood fights to remove every abortion limitation and regulation, and has pushed for President Obama to cover tax-payer abortions under his health care plan.  Live Action’s work exposes these violent practices which kill the most defenseless among us, hurt women and girls and undermine human dignity.  If Planned Parenthood was suspicious of Live Action as they claim and stand by everything they say, the group should have filmed the encounters themselves and release it publicly. The sad truth is, the abortion leader repeatedly reveals their radical abortion-first ideology and practices in Live Action investigations.” – Live Action President Lila Rose

The article that ABC News published following our statements and their “research” are shocking. The ABC News article lashed attack after attack against Live Action and painted Planned Parenthood as the apparent victim, while refusing to discuss the actual facts at hand or what might be exposed about these four radical abortion groups if these apparent tapes were to be released. In the article, ABC News spouts off the abortion-giant Planned Parenthood’s talking points and launches serious attacks against us and our work.

“Planned Parenthood is once again trying to frighten and divide women with lies. Live Action has never collected confidential medical information in the course of any investigation. In fact, Live Action investigations have documented Planned Parenthood’s routine willingness to keep the sexual abuse and commercial exploitation of minor girls “confidential” from law enforcement.
Live Action uses the same undercover techniques as CBS’ 60 Minutes, Dateline, NBC’s To Catch a Predator, and ABC’s 20/20, in order to reveal the abuse, unethical practices, lawlessness, and true abortion-first agenda of Planned Parenthood. The First Amendment does not state that freedom of speech and freedom of the press apply to these networks only.

Live Action exercises our first amendment rights to protect the right to life and the liberty of the most vulnerable among us–pre-born children, threatened by abortion–and to expose Planned Parenthood’s long-term plans to expand their abortion empire.  Planned Parenthood receives nearly half of their billion-dollar budget in taxpayer funded money every year and is now the nation’s top abortion provider, committing over 320,000 abortions each year while the taxpayer’s dime keeps their lights on.”

We need to expose the truth about abortion and protect women and their children from the violence of abortion. Women deserve better than abortion, and America deserves better than the “spin” that ABC News and these four abortion groups are purporting.

ACTION ITEM: Go to ABC News’ article and post a comment to take a stand against this behavior and stand up for women and their unborn children. We must protect women and their children from the violent practice of abortion!