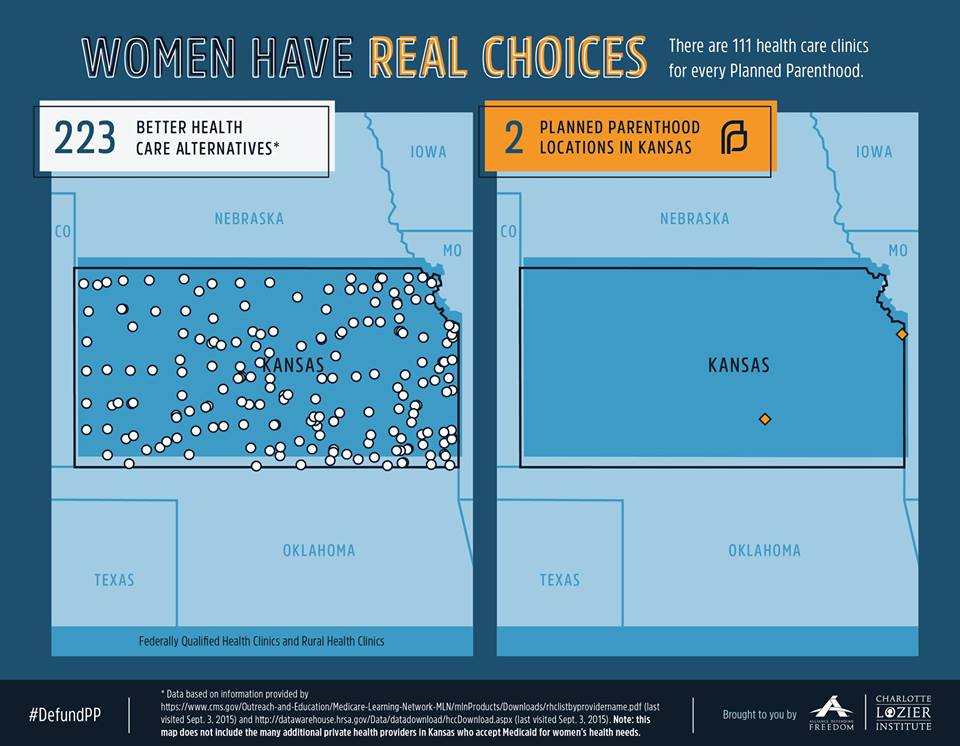 The facts could not be more clear: Planned Parenthood is in the business of abortion, plain and simple. Since Cecile Richards has taken over as president, the number of women who receive prenatal care and adoption referrals have plummeted. Planned Parenthood’s own staffers have admitted that they have no resources for women who don’t want abortion. And while the abortion lobby likes to pretend that women rely on Planned Parenthood for health care, that’s not true either — health care services like pap smears, breast exams, and cancer screenings have steadily fallen. The only thing that has risen is abortion. Yet people continue to perpetuate the myth that women need to go to Planned Parenthood if they want affordable health care, or are facing a crisis pregnancy.

Women have more options than just Planned Parenthood. And they should know it.

Another option for low-income women? Federally Qualified Health Clinics (FQHCs) are non-profit or public health care organizations that offer services to anyone who needs it, regardless of their ability to pay. Unlike Planned Parenthood, FQHCs provide “comprehensive primary care services.” There are over 1,100 FQHCs throughout the country, operating at around 6,000 sites.

Adoption is the choice that the abortion industry hardly ever mentions. As far as they’re concerned, women have two options: have an abortion, or be saddled with a  pregnancy that they say will ruin their lives forever. Planned Parenthood documents have shown that they are not interested at all in presenting adoption as a viable option for women. But it is — and more women should know that. Many people still associate adoption with the Baby Scoop era, where women in crisis pregnancies had their children cruelly taken from them, usually under coercion, especially for teenage mothers, and the mothers would never see their children again. But adoption is different today. Open adoptions are a growing trend, where mothers who aren’t able to fully provide for their children can give their baby the gift of a stable life, while still being a part of the family, involved in their baby’s childhood. The truth is, adoption isn’t about giving up your baby; it’s about giving life, and that’s a much better option than abortion for everyone involved… both mother, and baby.

What happens after an abortion? Planned Parenthood doesn’t care. They collect their money, perform the gruesome procedure, and then send the women on their way. There is no way for women to get help from Planned Parenthood if they’re struggling afterwards with the decision they made. There are post-abortion organizations, like Rachel’s Vineyard and OptionLine, devoted to helping these women heal from the trauma they’ve experienced. Planned Parenthood emotionally abandons the women they claim to serve after they’ve finished with the grisly deed, but for many women, it isn’t over. It may be months or even years later, but Planned Parenthood won’t be there for them if they ever need help.

Despite what Planned Parenthood and their allies in the abortion lobby want you to think, women do not need Planned Parenthood. They have options, no matter what their situation may be. And if the abortion industry truly was about being “pro-choice”, they’d stop trying to prevent women from knowing about them.