Abortion advocates often claim the abortion pill — which can be accessed by minors — is safe… so safe the industry is pushing for the pills to be dispensed without any medical oversight. But a recently released Telabortion study, which implemented more stringent safety requirements than usual, reveals that six percent of “known outcomes” from the abortion pill were severe enough to result in emergency room or urgent care visits, with additional women experiencing serious adverse events. If we extrapolate that number out nationally using figures based on Guttmacher Institute’s 2017 total of 339,640 chemical abortions, this could result in nearly 20,380 women per year seeking care at an ER or urgent care facility after taking the abortion pill.

The study, sponsored by Gynuity Health Projects (GHP), a group funded by organizations with deep historic ties to the American eugenics movement found that, 70 out of 1,157 participants (6%) faced complications from the abortion pill, resulting in ER or urgent care visits. In addition, there were 10 serious adverse events, eight (8) hospitalizations and five (5) transfusions. Just over 4% (47 women) required surgical interventions (generally due to incomplete or failed abortions), and 7.8% (92 others) required outpatient visits following their abortions. Although the table below shows 14 ongoing pregnancies (1.2%), the authors wrote that “[t]wenty-one abortions (1.8%) resulted in ongoing pregnancy.” 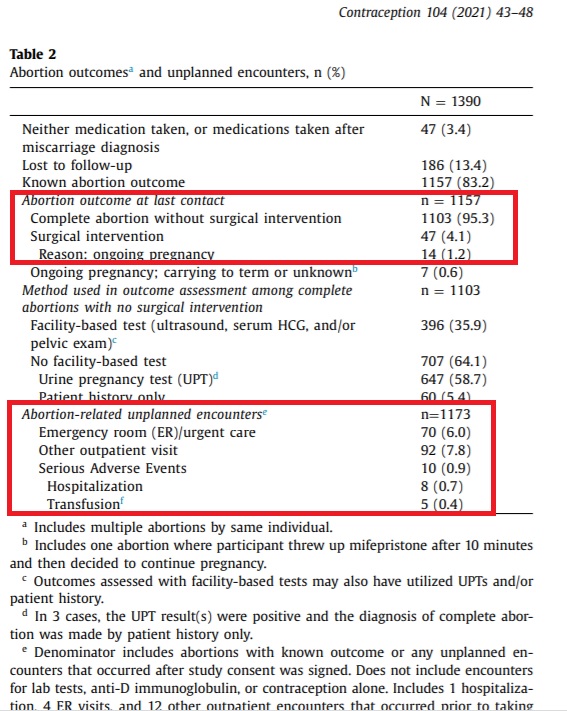 “Because of restrictions on mifepristone imposed by the Food and Drug Administration (FDA) under the drug’s Risk Evaluation and Mitigation Strategy (REMS), we implemented TelAbortion as a research study conducted under an Investigational New Drug (IND) application,” the authors wrote, adding, “Specifically, the REMS for mifepristone states that the drug must be dispensed to patients only in clinics, medical offices, and hospitals, which is commonly interpreted as prohibiting the mailing of the medication.”

Live Action News previously documented how the Gynuity-sponsored trial was used as a Trojan Horse to expand the online distribution for the abortion pill. This was confirmed by Erica Chong, one of the study’s co-authors, to the online media group Fast Company in 2019 where she noted, “The hope is to get enough providers on board so TelAbortion can eventually go from research study to full-blown service.” Fast Company even referred to the trial as a “workaround” to existing laws.

The TelAbortion study concluded that direct-to-patient telemedicine service was “safe” and therefore “supports the claim that there is no medical reason for mifepristone to be dispensed in clinics as required by the Food and Drug Administration.” But a comparison of that study with a 2018 retrospective observational study of abortion-related emergency department visits in the United States may indicate TelAbortion might be riskier than stated.

There is no federal requirement for abortion related complications, something the authors confirmed by writing, “National-level estimates of abortion-related ED visits do not exist.” However, the authors looked at data from state sources and found (emphasis added):

In a study using data from California’s Medicaid program, Upadhyay et al. found that 0.03% of abortions were followed by an immediate ambulance transfer to an ED and 2.6% of abortions were followed by an abortion-related ED visit within 6 weeks of the abortion. Another study that examined all medication abortions done by Planned Parenthood in 2009 and 2010 found an ED treatment rate of 0.10%, although medication abortions represented only about 23% of abortions at the time, and this study included only those ED visits that involved treatment. In a study of outcomes of abortion procedures by family physicians in New York and Philadelphia, 0.3% of first-trimester medication and aspiration abortion patients were referred or went to an ED for assessment.

The above percentages of ED visits are clearly much lower than the results of the recent TelAbortion study’s reported 6% who sought additional care at ERs or urgent care facilities.

“We determined that none of the [serious adverse events] SAEs was attributable to the telemedicine delivery of the service (e.g., they would not have been avoided if the participants had had in-person screening or picked their pills up in person),” the authors claimed.

However, it is important to note that the “direct-to-patient telemedicine service” trial initially put in place safety measures (lab tests, ultrasounds, and ruling out the risk of a deadly ectopic pregnancy) not currently being implemented by the abortion industry at large under the so-called “no-test” protocol. This fact makes the 6% complication rate even more concerning.

Except for participants who took part during the COVID-19 pandemic (March to September 2020), the study claims that participants “obtained any necessary tests at laboratories or radiology offices and had evaluations with a study clinician via videoconference during which the clinician confirmed eligibility… and agreed on a plan for evaluating abortion outcome using ultrasound, serum hCG tests, or urine pregnancy test (UPT).”

“Individuals were required to obtain a pre-abortion ultrasound or pelvic exam, and were deemed eligible for TelAbortion if the study clinician determined that the patient would be able to receive and take the mifepristone at ≤70 days of gestation and had no suspicion that the pregnancy was ectopic or nonviable,” authors wrote.

The authors later admitted, “Overall, 52% (346/669) of abortions during COVID occurred without a screening ultrasound, though this proportion varied widely by site (0%–83%).” If more safety protocols were followed in the clinical trials than in real-life situations, the 6% rate with a “no-test” protocol could potentially be much greater.

“We defined an adverse event as serious if it was fatal, life-threatening or resulted in hospitalization, transfusion, or significant disability. An unplanned clinical encounter was any visit to a clinician after the study package was mailed, except visits to obtain anti-D immunoglobulin, contraception, or routine ultrasound or lab tests to evaluate abortion outcome in the absence of concerning symptoms. The study team evaluated the reason for each unplanned encounter to determine whether or not it was abortion-related,” authors wrote.

Authors admitted that 38.3% of the abortions and 65.9% of pre-abortion tests were paid for by either private or public insurance, meaning that taxpayer dollars aided in the killing of preborn children during this clinical trial. In addition, authors claim, “For the first 127 participants, the study paid for care and medications provided directly by sites” and “offered participant compensation of $50 until late 2018,” before they eventually stopped.

“Thirty participants received 2 abortions and 2 received 3 abortions during the reporting period,” the study claimed. “Of the 1356 individuals who received a package, 26% were under 25 years of age, and 14 were minors,” and “[t]he median gestational age on the day of mifepristone ingestion was 53 days gestation (range 29–76). In eleven abortions (1% of those with outcome information), the participant took mifepristone past 70 days of gestation.”

Despite multiple complications, the authors wrote that “[e]xperts have advocated for adoption of ‘no-test medication abortion,’ which, by not mandating screening ultrasound, blood tests, or follow-up tests unless clinically warranted, would allow the treatment to be provided without an in-person encounter.”

The study, “Expansion of a direct-to-patient telemedicine abortion service in the United States and experience during the COVID-19 pandemic,” which included participants as young as 10 years old, was published in the journal Contraception, a publication founded with a “generous contribution” from the Packard and Buffett Foundations, original funders of the abortion pill manufacturer, Danco Laboratories.

It should be noted that Contraception — unlike more reputable publications — allows “anonymous donors” to fund abortion studies leaving some to suspect potential conflict of interests.