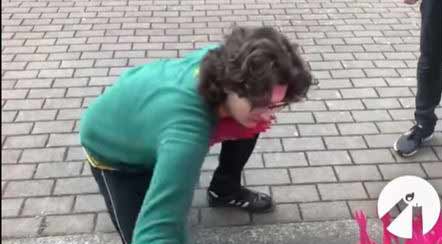 The Students for Life group at Whatcom Community College in Washington recently took part in the organization’s “Planned Parenthood Truth Tour,” displaying pink crosses on campus last month to represent the preborn children killed by Planned Parenthood each day. One pro-choice student took offense to the display and began stealing the crosses. The encounter was caught on camera.

The pro-abortion student can be seen removing the crosses one by one from the ground. When he is asked why he is taking them, he responds, “Because I disagree with the message.” He is told that he is on private property and that Students for Life had permission to use the space, but he mocks the idea that what he is doing is illegal.

While the pro-life students attempt to engage the young man in conversation, he refuses, saying, “I do not think it is worth it to talk to you guys.” He continues to be sarcastic towards the pro-lifers, mocking them when they tell him he needs to stop.

“[…]Pro-life arguments have about as much merit as like flat Earth arguments,” he says, comparing the scientific fact that life begins at fertilization and preborn children are human beings to the notion that the Earth is flat. He says he will not have a conversation with the pro-life students because “I fundamentally disagree with all of what your arguments are based off of so there’s really no point.”

“Aren’t you for free speech, though?” asks a pro-life student. The pro-abortion student shakes his head. He goes on to say that he will likely throw the crosses away, and once his arms are full of crosses, he begins to walk away.

It’s at this point that it appears that a college staff member notices what is unfolding and tells the student he must return the crosses.

“You don’t have to agree with them,” says the staff member, “but you do have to give them the same access everybody else has.”

The pro-choice student then drops the crosses in a heap and walks away.

Vandalism against pro-life displays and attacks against pro-lifers have been on the rise — including the instance of Pennsylvania State Rep. Brian Sims harassing and attempting to dox teenage pro-life girls outside of a Planned Parenthood.  And a pro-abortion man is now on probation after roundhouse kicking a pro-life woman.

These attacks are proof that, rather than abortion being the simple procedure the abortion industry claims, it is emotional — and for good reason. Abortion takes a human life. Those on both the pro-life and pro-choice side know this. When a pro-choice person attacks a pro-life display, it could be a sign that abortion has personally touched their lives, and they are dealing with its painful aftermath.