NARAL once awarded the pro-abortion politician and Planned Parenthood-funded politician caught bullying an elderly pro-life woman and several pro-life teens. Pennsylvania state representative  Brian Sims uploaded videos of himself, taunting and harassing peaceful pro-life sidewalk counselors outside the Locust Street Surgical Center Planned Parenthood in Philadelphia which commits abortions up to 15.6 weeks gestation. The facility is operated by Planned Parenthood of Southeastern Pennsylvania (PPSP) which advertises abortions at various facilities up to 16.4 weeks.

In 2014, Sims was the recipient of the “Champion of Choice Award” issued by NARAL Pro-choice America. Ilyse Hogue, president of NARAL Pro-Choice America, and state Rep. Brian Sims of Pennsylvania are posing in the image below.. 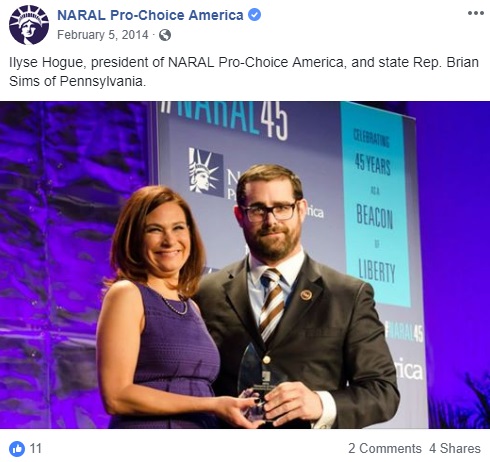 In a video of his acceptance speech, uploaded by NARAL, Sims brags, “By any measure of importance women are my equals. I’ve also known something…. Everyday that we stand up as allies to the women’s and reproductive rights movement and that is the reality of the privilege that we carry as men….”

He then recounts a time on the House floor where he defended abortion: “On the afternoon in April of last year when I stood up in chambers and opposition to a bill that would ban private insurance companies from offering private insurance to a woman for something she has a Constitutional right to to do with her own personal funds, I asked my colleagues how it was that in a room of nearly 160 men I was the man that respected women the most.”

Respect is a term apparently only reserved for women who support abortion. In his shameful conduct outside PP, Rep. Sims has demonstrated that he is not a person who respects all women.

Pennsylvania State Rep @BrianSimsPA has to go. He must resign. He refuses to apologize for instigating the doxxing of minors. He doesn’t support the right to peaceful protest. He mocks people’s faith & skin color. He is toxic to an elected body. He must go. #ResignBrianSims

In 2013, when Sims received word he’d be “honored” in NARAL’s Hall of Fame, he wrote a statement from a speech he once gave on the House floor opposing over abortion legislation: “Each of us put our hand on the Bible and swore to uphold the Constitution. We did not place our hand on a Constitution and swear to uphold the Bible.”

Sims is a dedicated supporter of abortion vendor Planned Parenthood, even posing with their former president Cecile Richards.

During her tenure as president, Richards can be credited with a sharp decrease in actual health services and an increase in abortions and government funding. The former Planned Parenthood political organizer recently announced her involvement in a new organization to organize women voters — which she claims is non-partisan. 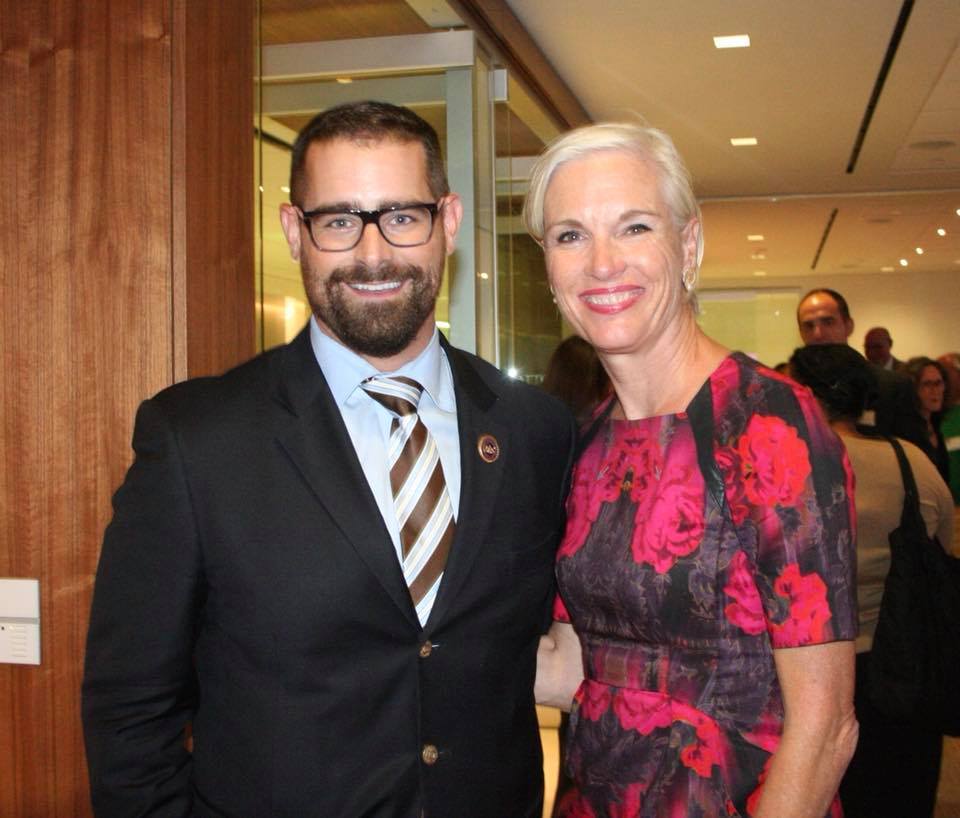 Over the years, Planned Parenthood Pennsylvania PAC has contributed to Sims’ election. Below is an image from the Pennsylvania Department of State for 2017. 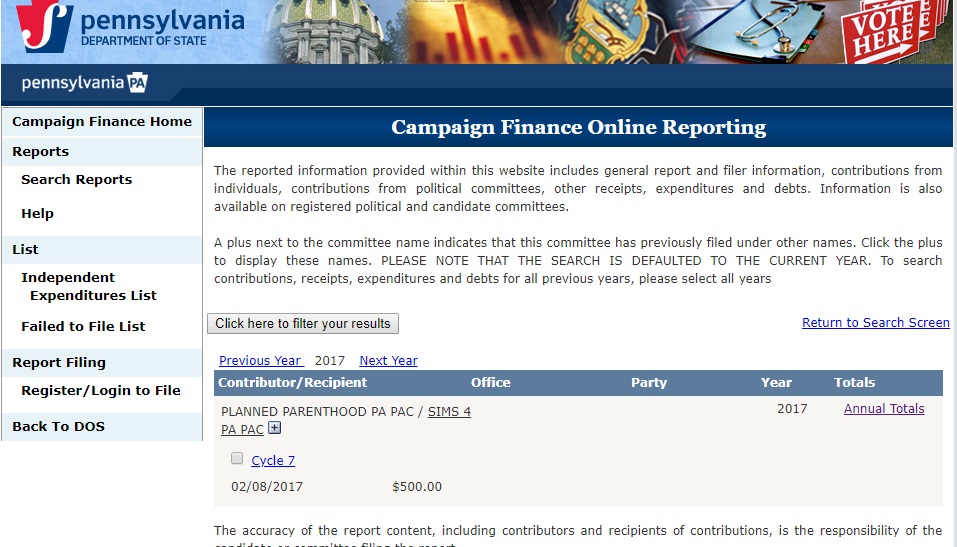 In a speech Rep. Brian Sims gave at the 2017 Philly Women’s rally, he claimed the problem of misogyny was created and perpetuated by men. He then vowed:

Sims went on, “In our city halls, in our Senate floors, in our boardrooms and in our back rooms, we are a country that cannot and will not succeed without the courage, the vision, bravery, and the empathy of women.”

Claiming to have gone “toe to toe” with the “enemies” of Planned Parenthood and “choice,” Sims added, “I know without question what this Commonwealth needs, what this nation needs, is for women to be treated with absolute equality and dignity and nothing less.”

He then challenged men to see their “cowardice, insecurity and fear” and to “rise above the fragility that you must feel in order to feel superior over someone else.”

Ending his speech by telling the crowd, “Expect respect and by all means demand dignity.”

Rep. Sims talks a good talk but fails to walk the true walk of a man who knows how to show dignity and respect to women.

To recap, men are to respect women unless they are pro-life.

Despite claims these groups care about women, as of the writing of this article, neither NARAL, Planned Parenthood, Cecile Richards, nor her alleged “pro-women” group “Supermajority” have condemned Sims’ conduct.