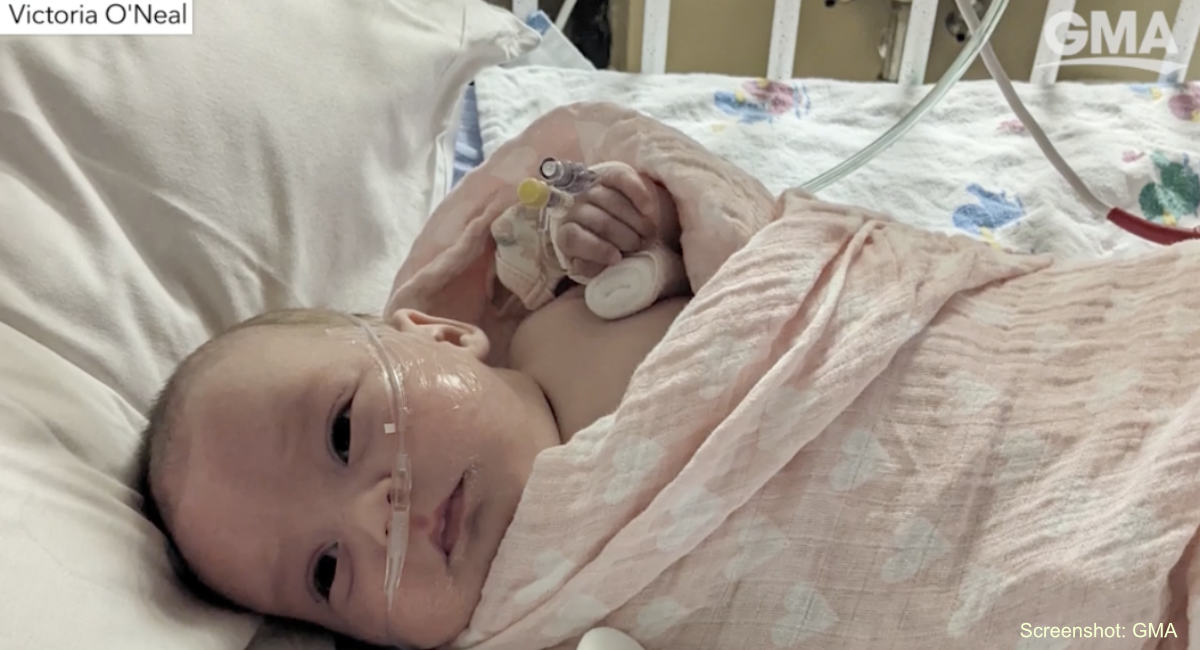 The 2022 respiratory syncytial virus (RSV) season has been particularly hard on small children this year – and it might have been even harder for one family with triplets if a state trooper hadn’t been in the right place at the right time.

Derrick Stroud was speeding down the highway at 100 miles per hour with his hazard lights on, fiancée Victoria O’Neal and their nine-week-old triplets in the car. One of the little girls – Amelia – started getting sick on Sunday, and by Tuesday, she was struggling to breathe. Victoria frantically called Derrick at work, and asked him to take them to the hospital because of how sick Amelia looked. But as he flew down the highway, a local state trooper put on his lights.

“When he pulled me over,” Stroud told Good Morning America (GMA), “I was frantically hanging out the window, letting him know that my baby was having problems at that time breathing.”

North Carolina State Highway Patrol Trooper Matthew Brown saw Stroud’s distress as he got closer and rushed to help. “When I got up to the driver … he was visibly distraught and upset. He said he was on his way to the hospital, which confused me because he had already passed the exit to go to the local hospital, which would be the hospital in Kinston,” Brown explained. “And when I asked him that, he said his daughter was having trouble breathing and he was taking her to the hospital in Greenville, which was about another 30 minutes away from where we were at.”

Brown, a former firefighter and EMT, quickly examined Amelia. “When I got back there, the baby was unresponsive sitting in the child’s seat. I turned her head towards me, and I could see that her lips started to go blue, and she was having a lot of trouble breathing,” Brown said to WTVD. He removed the infant from her car seat, and began vigorously rubbing her back in an attempt to stimulate her breathing.

“I was just trying to get something out of her and she finally did come out and open her eyes and start interacting and I could tell whenever she started breathing more normally that she was still having some kind of, something going on with her lungs because her lung sounds weren’t very clear,” said Brown. After Amelia became more responsive and alert, Brown called an ambulance for Amelia so she could have medical attention while she was on her way to the hospital. Finally at the hospital, Doctors confirmed Amelia had RSV, and supported her breathing with additional oxygen.

After a few days, she was well enough to go home.

Stroud and O’Neal were deeply grateful for Brown’s quick actions. Brown insisted he was just doing his job as a state trooper. “Part of the reason that I joined the highway patrol was so I would be able to be out there and have access to do this kind of stuff and help people,” he said. Brown also shared that he is a twin himself, and is soon also expecting twins with his partner.

Amelia’s parents see it as much more than just Brown answering the call of duty. “It’s very crazy how everything works because like I say, for him to pull us over with triplets, and he’s a twin himself expecting twins and everybody was just in the right spot at the right time. It’s just really a blessing and I just wanted everybody to know that he is the reason that [we] still have Amelia,” Stroud said.

“He was an angel or a hero,” added O’Neal. “I don’t want to imagine the level of panic I would have had if that had been me, if I had been the trooper and I had pulled someone over and there was a little baby turning blue in the backseat, like to have been able to keep a level head and do what he needed to do to help her, it’s just amazing and I’m so grateful to him.”