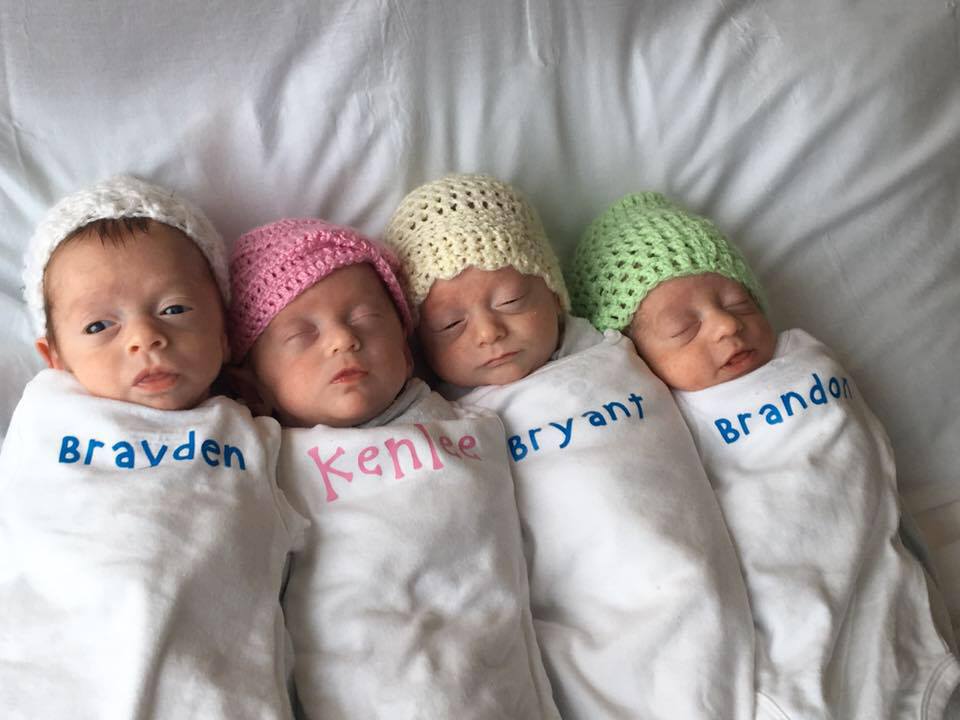 On December 16, 2016, Justin and Kortney Miller welcomed four babies at just 29 weeks gestation. Brandon, Brayden, Bryant, and Kenlee are the first set of quadruplets to be born at Piedmont Newnan Hospital in Georgia. On February 18, 2017, after a total of 65 days in the Level 3 Neonatal Intensive Care Unit, the last of the quadruplets to be released, Brayden, was able to join his brothers and sister, including big brother Bentlee, age 4, at home.

Though multiples run in Kortney Miller’s family, the couple were surprised to learn they were having quadruplets. The chances of conceiving quadruplets without fertility treatments are just one in 700,000. The couple were excited at the news that they would have four new babies.

The Newnan Times-Herald reported that the hospital created a large team of experts to prepare for the birth. They became known as the “Quad Squad,” spending months preparing for the birth. They even held two practice deliveries. When the time came for the babies to be born, everyone was ready.

“Things could not have gone better,” said Dr. Adegboyega Aderibigbe, a neonatologist at Piedmont Newnan’s Level 3 NICU. “Everyone knew what to expect and when the day arrived, we had a few hours’ notice and everything went smoothly, thanks to the Quad Squad’s teamwork.”

While each of the babies spent over a month in the NICU, they are doing very well for having been born at just 29 weeks. Kenlee sees a vision specialist for her eyesight, but otherwise, the babies are healthy and are expected to thrive.

“Things are going great, and we are so happy to have them all home,” Kortney Miller told TODAY. “We have a good support system. The hardest thing is nighttime feedings, because they have to eat every four hours, and it takes about two and a half hours to do that each time for all four, between eating, burping and changing.”