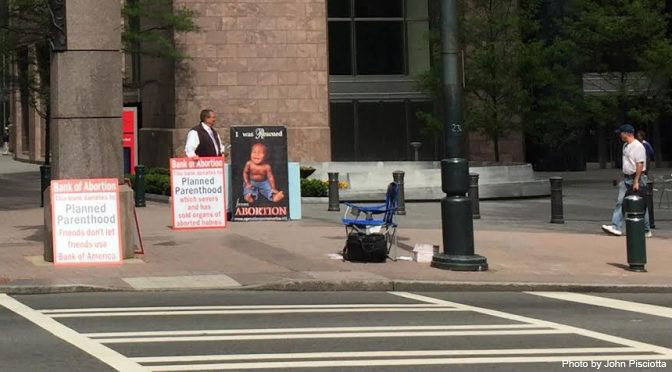 The international headquarters of the second largest bank in the USA is facing protests this week over their support of Planned Parenthood, which has been embroiled in a scandal since last summer over its harvesting and sale of aborted fetal body parts.

Pro-life activists from across the country traveled to the headquarters of Bank of America (BOA) in Charlotte, North Carolina, with a very public message to stockholders and BOA customers: This Bank Donates to Planned Parenthood.

The campaign, dubbed ProtestBOA, began last year when John Pisciotta, founder of Pro-life Waco, began with his local Waco branch after confirming that BOA funded Planned Parenthood in its employee matching gifts program. Pisciotta said that since ProtestBOA began in Waco, it has expanded to branches in Austin, Lubbock and Albuquerque. He said that he began the protests in response to the undercover videos showing Planned Parenthood “deeply and callously involved in the market for fetal organs.” “Additionally, the protests’ motivation includes the horrific fact that Planned Parenthood clinics in the USA commit over 300,000 abortions each year. By its actions, Planned Parenthood has disqualified itself from financial support from corporate America.”

In addition to Planned Parenthood, a quick look at past Bank of America Charitable Foundation, Inc. 990’s shows that they also contributed to the abortion giant’s former research arm, the Guttmacher Institute. Pisciotta told Live Action News that prior to heading to the BOA Headquarters, he sent Bank executive Kerry Sullivan, President, Bank of America Charitable Foundation a letter, which read in part:

I know we share an interest in bringing an end to the Protest Bank of America movement. On the pro-life side, we do not believe that an organization as hyper-controversial as Planned Parenthood is a reasonable entity for inclusion in a corporate matching grant program. Planned Parenthood is the leader of the U.S. abortion industry—323,999 abortions in 2014. Additionally, for nearly a year, Planned Parenthood is been embroiled in controversy over its role in the market for fetal organs from aborted babies. The pro-life/pro-abortion contention has subsequently reached an unprecedented level. I would not have launched ProtestBOA last September were it not for revelations about Planned Parenthood harvesting and marketing fetal organs…

I ask you to reconsider your inclusion of Planned Parenthood in your matching grants program. I am well aware that you do not include all 501c3 non-profits as designated by the IRS. Planned Parenthood should not be in the included category.

I will be in Charlotte next week to protest. I would welcome the opportunity to visit with you to resolve the issue. Joining Pisciotta at BOA’s headquarters were several other pro-life activists, including Flip Benham, who has been active with pro-life group Operation Save America.

Pisciotta reports that the Charlotte BOA protests, which began this week, have been very positive and BOA customers have been quite supportive.

The response was very positive at this busy intersection in uptown Charlotte. (I don’t think they say downtown.) There was none of the harshness from the other side that we get every once in a while in Austin. Generally, people either walked by or were positive. As expected, there were a lot of people thanking us for being on-site and standing for life. Pisciotta is not a novice at exposing the evils of abortion. He has organized other protests, exposing the way Planned Parenthood markets sex to children, and targeting the Susan G. Komen Foundation for their support of Planned Parenthood. Pisciotta and other pro-life groups have also organized overpass demonstrations to expose the horrors of abortion.

There are specific things that people can do today in an attempt to influence BOA to stop funding Planned Parenthood, says Pisciotta. He has listed those suggestions in a flyer that he has been distributing to BOA customers during his protests:

#2 Complain to your BOA branch manager about the program.

#3 Close your BOA accounts and tell BOA why you did it.

#4 Call your friends and let them know about BOA support for Planned Parenthood, which commits over 300,000 abortions every year.

“Here is the big one,” Pisciotta added. “Deliver a #ProtestBOA in your hometown. Pro-Life Waco will send you 3 large signs and guide you on how to #ProtestBOA.”