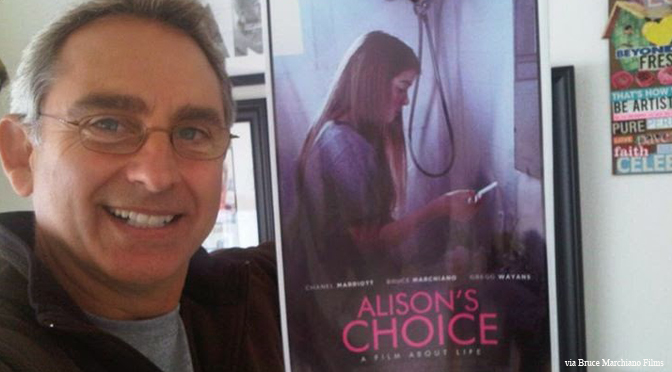 In only a short time, Bruce Marchiano’s pro-life film, Alison’s Choice: A Film about Life, has gone from vision to reality. As Live Action News reported last September, Marchiano was raising funds to produce the film. And now that film is complete, so Marchiano is seeking a distributor.

Marchiano, a veteran actor, is best-known for his portrayal of Jesus in The Gospel of Matthew film, but now Marchiano has turned producer and screenwriter and expects Alison’s Choice to change many lives.
[vimeo 137515846 w=500 h=281]

Marchiano’s immediate need is to find a film distributor. If his efforts at fundraising to finish the film are any indication of the success Alison’s Choice may have, then a distributor is probably not far behind.

Making the film was an easy choice for Marchiano who says he has been thinking of it for many years:

For probably 15 years, as an actor, I thought if ever I had the chance to produce a film it would be about those babies, in hopes of changing the hearts of their moms and dads and saving their precious little lives.

Marchiano knows that a pro-life Christian film isn’t necessarily a Hollywood recipe for success at the box office, but that’s not what matters to him. Abortion, he says, is too important to ignore:

For me there’s no greater human tragedy than this thing we call abortion. You can take all the guns off the street and stop all the wars and feed all the poor–and still the blood of innocent babies is shed in the thousands every day. One of the unique aspects of this film is the role of God in the flesh. Marchiano says that the personification of God in this film was a way to bring a visual to the physically invisible but real role God plays in these scenarios. He says:

In all the discussion about abortion my thought was “where is God in all of this?  What is he ‘doing’ in the midst of it all?”  The answer to me was simple: He’s passionately pleading with every mom sitting in every clinic to not do what she’s planning to do. He’s pleading in her heart and mind to save her baby’s life.  That’s the story of Alison’s Choice :God’s crying out to one girl, Alison, the clock ticking her baby’s life away.  There’s a scene where [God] breaks down weeping because of what’s happening to “my babies.”  And it’s not far-fetched.  one of our actresses has a son who lives today because she ran out of a clinic at the last second. Our lead actress’s mother contemplated aborting her but didn’t. One of our crew members told me his son was born because his girlfriend ran out of the clinic at the last second. so you see, Alison’s Choice is actually a “true” story.

Marchiano has big dreams for the film, even though he knows that making big money may not be in the cards. To him, lives are more important than the dollar. He says, “Our best chance of making an impact is the pro-life community rising in a grassroots groundswell of demand and chatter across social networks, etc. that theater owners can’t deny.” The same happened with Mel Gibson’s “The Passion of the Christ” years ago, he says.

What Marchiano hopes will ultimately happen with the film is a grassroots groundswell in the heart of the pro-life movement:

My long-term hope is to see Alison’s Choice used by pregnancy centers on a “mom by mom” basis, [to see it] handed out in counseling sessions, handed out at campus outreaches, screened at high schools and colleges, etcetera. In other words, [I want to see it] reaching moms and dads right where they are.

And the award he is seeking will come in the form of a letter he is longing to receive.

[The letter that reads] “I chose life for my baby because of this movie” is our goal–and that’s better than all the Academy Awards put together!

Marchiano says what’s most important now for the public is to connect with the film. Besides the website, he asks people to follow the Facebook page for it.

Additionally, he hopes that pregnancy centers and pro-life organizations will contact his company for inquiries, previews, and anything else that will get this important, life changing film in the hands of those who need it most.