Planned Parenthood loves to use inappropriate holidays like Christmas, Valentine’s Day, and Mother’s Day to promote abortion. Now they’re also using God himself to sell women on getting abortions. A post at Saynsumthn’s blog spotlights a “pastoral letter to patients” from Planned Parenthood’s Clergy Advocacy Board, advising women that they should go have that abortion, because God is totally cool with it! 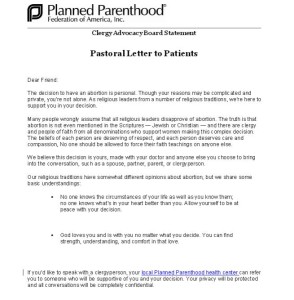 Many people wrongly assume that all religious leaders disapprove of abortion. The truth is that abortion is not even mentioned in the Scriptures—Jewish or Christian—and there are clergy and people of faith from all denominations who support women making this complex decision. The beliefs of each person are deserving of respect, and each person deserves care and compassion. No one should be allowed to force their faith teachings on anyone else.

We believe this decision is yours, made with your doctor and anyone else you choose to bring into the conversation, such as a spouse, partner, parent, or clergy person.”

Our religious traditions have somewhat different teachings on abortion, but we share some basic understandings:

Yes, ladies: God is in the room with you, smiling warmly as your baby is brutally ripped to pieces.

While God does, of course, love all of us no matter what we do, that does not mean that He approves of all of our choices, or that He finds all of our decisions acceptable because we feel that they’re “right for us”. Otherwise, there would be no such thing as sin. And of course, the idea that the Bible does not condemn abortion is a fallacy.

And what would be absolutely fascinating to find out is which clergy Planned Parenthood would refer these women struggling with the decision to have an abortion to. Their clergy advocacy board is comprised almost entirely of pro-abortion religions, without a single Catholic priest listed, although that’s not entirely surprising. It’s a safe bet that Planned Parenthood wouldn’t be referring anyone to any Catholic priests, too. They don’t want anyone giving any answer except that God loves their abortion.

The reality is that God loves all of His people, even the least and most vulnerable among us. He isn’t going to be cheering on a woman’s decision to kill one of His children because that child is inconvenient for her — but that doesn’t keep Planned Parenthood from perverting His name and using it to sell women on having an abortion. It doesn’t get more sickening than that.