As 2017 is coming to a close, Planned Parenthood is trying to get all the money it can to support its thriving abortion business. The giant abortion chain’s president, Cecile Richards, sent out a year-end update letter the way many people send year-end updates to their friends.

The update letter — a 2017 Year in Review of sorts — is replete with Planned Parenthood’s usual delusions of grandeur, as it details things its supporters did this year. (Included throughout are multiple instances of active injustice, all celebrated in flowery terms.) However, by necessity, the letter is short, because even with the fancy laudations, there’s not much to tell. Planned Parenthood’s Year in Review letter contains virtually no real content, just multitudinous fundraising links. It opens:

It’s been a rough year. But through it all… you showed up. Like this:

In January, Donald Trump was inaugurated… 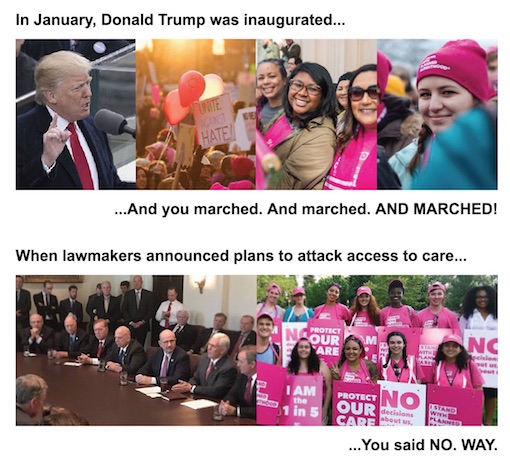 Part one of the Planned Parenthood 2017 Year in Review email

Embedded in the copy are contrasts, carefully placed to convey a rhetorical message. There are pictures of President Donald Trump and pictures of legislators in suits — somber-looking pictures, as all male as Planned Parenthood could find —  contrasted with passionate (and very pink) pictures of women marching, protesting, and standing for the cause of all women to have their “health care.”

Of course, if anyone tries to tell you in 2018 that abortion (i.e., Planned Parenthood’s largest avenue of business) is health care, have them watch the video below. According to former abortionist Dr. Anthony Levatino, abortion is actually a violent brutal act against humanity, and the animated video he narrates below proves it:

Next in the year-end letter, Richards says, “Lawmakers announced plans to attack access to care….” Of course this isn’t remotely true. Lawmakers announced plans to cut off the already-rich abortion corporation from federal funding, and to redirect that money to Federally Qualified Health Care (FQHC) centers, which would actually give the average woman, who is not seeking an abortion, increased access to real health care.

Since FQHCs outnumber Planned Parenthood locations by many, many times around the nation, women would actually have shorter drives and more services available if FQHCs were funded and promoted instead of Planned Parenthood. Naturally, though, that doesn’t make good rhetoric for the America’s largest taxpayer-funded abortion corporation. So Planned Parenthood interrupts its update letter to ask:

That begs the question: If the abortion profiteer has people willing to match almost $1 million, and that’s just for a year-end gift, why on earth does it need taxpayer money?

Continuing to lavish praise on abortion activists in order to garner their donations, Richards’ letter continues:

…You turned the internet (and more) BRIGHT PINK! 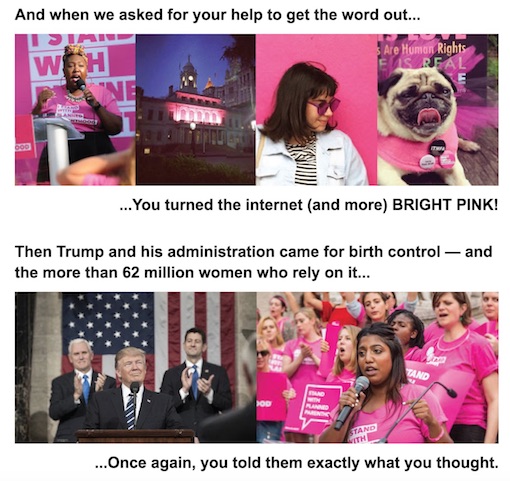 Part two of the Planned Parenthood 2017 Year in Review email

Cut to more cheery pink pictures–and don’t forget the puppy standing with the abortion giant, presumably without his consent. Always use a puppy when you want to move peoples’ hearts to your cause, particularly since puppies have no say in the matter and have nothing to do with the issue at hand. When Planned Parenthood resorts to puppy faces, we know the abortion chain doesn’t have concrete details or facts to offer.

Richards moves from puppies in her year-end letter to birth control:

Then Trump and his administration came for birth control — and the more than 62 million women who rely on it..

…Once again, you told them exactly what you thought.

Perhaps this is the most abhorrent line in Richards’ letter because it alludes to the Holocaust and the famous lines by Martin Niemöller, as noted by the United States Holocaust Memorial Museum. Niemöller who was “an outspoken public foe of Adolf Hitler and spent the last seven years of Nazi rule in concentration camps” was referring to the silence of those who let injustice and evil prevail and don’t speak out when he infamously discussed who the Nazis “came for.”

For Richards to allude to this, somehow comparing atrocities like those Hitler perpetrated to Republicans not wanting to force companies to pay for someone else’s elective birth control is unconscionable. Its’ certainly not the first time the abortion industry has used Niemöller’s quotation for their own purposes, (case-in-point here).

But clearly, Richards would like Planned Parenthood activists to think their very lives and health are under attack, something she concludes her fundraising plea by noting:

Throughout every attack, health center doctors, nurses, and staff carried on…

This, right here, is what your year-end donation supports: the more than 8,000 patients who depend on Planned Parenthood for care, every single day. 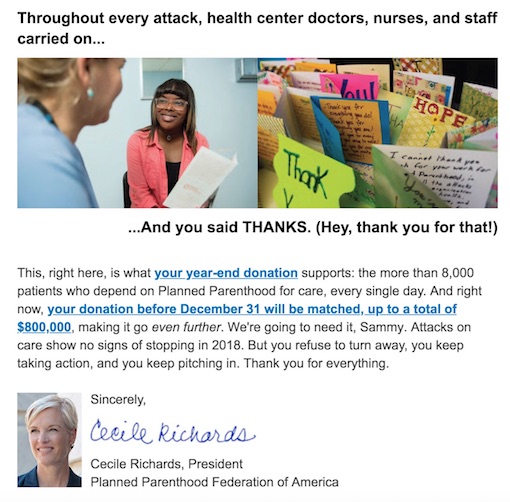 Part three of the Planned Parenthood 2017 Year in Review email

The pleas for money in this “update” letter are actually the entire purpose of this mailing. It’s disguised as a letter saying “Hey, women! We did it! They tried to take us down, but you stood! We stood!” But it’s actually a whole lot of words with little substance. Every picture on the page, every bolded piece of text, all of it, is a live link, embedded multiple times in the text, to the Planned Parenthood fundraising site. In fact, not counting the header, footer, and other such links, just the body of the letter links to Planned Parenthood’s fundraising site 27 times. (Desperate much?) Each individual picture and bold point received its own separate link, as if to be sure, somehow, that people would be forced to click on the link so many times, they might give just from the persistence of it all.

Cecile Richard’s 2017 Year in Review letter is not really an update at all. In fact, it serves a twofold purpose:

1) It’s a piece of email with so many live links to donate that it’s clear the entire purpose was to offer some pretend praise and guilt women into giving more money so that the almost-$1 million can be turned into double the amount, allowing the rich abortion corporation to get richer.

2) It’s proof that Planned Parenthood didn’t do much this year but blow hot air. One would imagine such a desperate plea for money would cite numerous accomplishments Planned Parenthood and its activists have achieved this year, but there is nothing to say apart from “you marched; you showed up; you turned stuff pink.”

If this were an honest update letter it would say, “In 2017, we tried to make everyone think we were about health care, but in the end all we have to show for it is an investigation by the United States Department of Justice, and likely the FBI, too. Also, abortion after 20-weeks and our popular (but very violent) D&E abortion procedure are about to be banned by Congress in January 2018. So hurry and give us money because our time is running out to keep all this federal money that has helped make us so rich with our preborn baby killing business model.”