A Planned Parenthood supporter recently tweeted that she wanted to ram her car into pro-life protesters outside the abortion business, but relented only because she had “self control.”

The Tweet appeared December 22 on the page of @kaitlynkelly, or “Kate,” just days after an ISIS supporter “rammed” a truck into a crowded Christmas market in Berlin, killing twelve innocent people and injuring dozens of others. Kate’s message read:

The mere suggestion that anyone should do such a despicable act is bad enough but what is equally concerning is that 30 other Planned Parenthood supporters “loved” the message and three actually retweeted it.

But the threat of violence against pro-lifers isn’t new. Sidewalk counselors are often on the receiving end of rage, anger, threats, and assaults — and the abortion-friendly media has done a good job of burying this information.

One sidewalk counselor in Florida told Live Action News that her pro-life group of counselors has been assaulted a number of times by abortion supporters, and we reported on one of the many incidents.

In another example of violence toward pro-lifers, abortion activist Melanie Maria Toney was arrested in 2015 after she hurled a Molotov cocktail device at pro-lifers outside a Planned Parenthood in Texas. Thankfully, no pro-lifers were injured, but the media was relatively silent when the incident occurred, questioning the perpetrator’s “motive” and suggesting she may have been targeting the clinic instead of the demonstrators. That suggestion was quickly put to rest when it was revealed that Toney had previously testified against restrictive abortion laws in the state:

Outside Planned Parenthoods and other abortion facilities across the country, pro-lifers are subjected to threats from people wielding guns as well. Most of those threats have ended in the arrest of the threatening individual, with no one else being injured. However, tragically, one activist, James Pouillon, was murdered by a gunman after he took the pro-life message to a school. 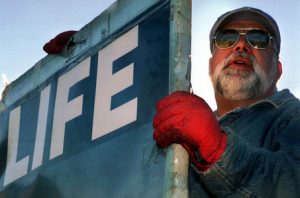 The killer, Harlan Drake, told police that the night before the shootings he intended to kill Pouillon if he saw him at the school the next day holding his pro-life sign.

“I just drove and stopped, and I shot (Jim Pouillon),” Drake said during an interview recorded by police the day of the shootings.

“He was still moving so I shot him one more time. I aimed under the ribcage going up toward the heart.”

“I figured if he was there, I’d make sure he wasn’t there (again)…”

Activists bringing the pro-life message to schools and universities have also been targeted with threats and assaults.

In 2014, a pro-abortion professor at the University of California at Santa Barbara made headlines when she stole the sign of a pro-life activist who attended a peaceful outreach on the UC Santa Barbara campus on March 4th. Two of the pro-lifers present also claimed that professor of Feminist Studies, Mireille Miller-Young, assaulted them in the struggle. Defending her actions, the professor suggested that she had set a good example when she attempted to incite students to violence and initiated the theft.

As a result, the Santa Barbara District Attorney filed charges of grand theft, battery, and vandalism against Professor Miller-Young. 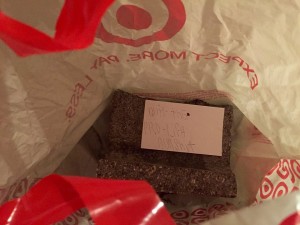 But the violence is not just limited to the sidewalks. Less than a year ago, Live Action News reported an incident of violence at the home of pro-life leader Jill Stanek. In February 2016, she returned home from a family vacation to find her home vandalized. She told Live Action News that a brick had been thrown through her window, with a note ordering her to “Quit the pro-life bulls**t.” Stanek, a former labor & delivery nurse, is an outspoken advocate of the 20-week abortion ban, often recounting her testimony of holding a 20- to 21-week-old abortion survivor in her arms just before he died.

In addition, Planned Parenthood’s supporters probably have no idea how often the abortion business covers for child sexual abusers, potentially returning vulnerable children into the arms of their abusers for continued assaults. Live Action has documented this and other ways that Planned Parenthood devalues women and children.

Abortion itself is a violent act, which kills a human person and violates the sanctity of life. Sadly, those who support abortion are slowly being desensitized to the value of all human life, especially those who oppose their views. Let’s pray this changes quickly.