But while publicly, the messaging was one of empowering others to make “choices,” the real motivation was population control. Guttmacher once told the New York Times, “The main goal of our program is not just to limit population, but to give everyone the same opportunity for quality medical care.” Note that Guttmacher acknowledged population control as one of the goals, but clothed it in the same type of messaging used by modern-day Planned Parenthood: the language of access to “health care” or “medical care.”

Planned Parenthood’s ultimate goal was to convince the public that taxpayer-funded “family planning” — directed at preventing births among the poor — would save the taxpayer money. And, just like today, the nation’s largest abortion provider accomplished this goal with the help of politicians on both sides of the aisle.

In 1965, President Lyndon Johnson lent his support to taxpayerfunded “family planning” efforts, stating in a speech that for every five dollars spent on population control, more than a hundred would be invested in economic growth. The scheme to promote the use of taxpayer dollars as a way to “reduce costs” was detailed in the film Maafa21:

The “plan” — described in the 1966 NYT article as a “partnership of public and private agencies” — was to make birth control services “freely available to every American by 1970” in an effort to prevent about 250,000 pregnancies every year. It was presented at Planned Parenthood’s New York headquarters by the organization’s then-president, George N. Lindsay, who called it the “best bargain in health services that money could buy.”

“We have the technological know-how — pills and intrauterine devices,” Lindsay is quoted as saying. “We have the support of Government. President Johnson has called for increased birth control services in the past two State of the Union messages. And now we have devised a methodology for solving a huge problem in five years.”

That same year, President Johnson accepted Planned Parenthood’s highest award (the Margaret Sanger Award) for his policies pushing family planning for foreign countries. The founder of Planned Parenthood, Sanger’s work in the eugenics movement has been highly criticized by many modern African-American leaders. Sanger, who gave at least one speech to the Ku Klux Klan and stacked Planned Parenthood’s boards with eugenicists, advocated the sterilization of the so-called “unfit.”

Today, despite her involvement in the eugenics movement, Planned Parenthood labels Sanger a heroine and has positioned her name in a place of honor on at least one of its centers. 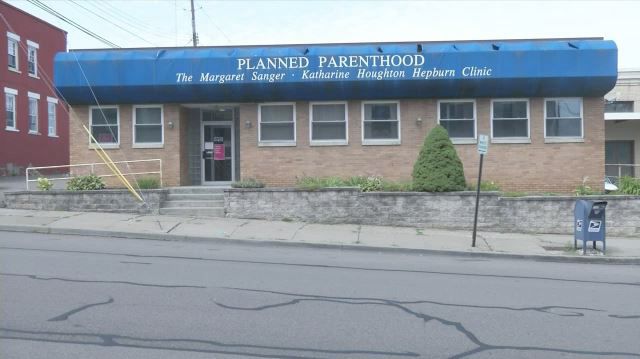 By 1969, the so-called “Planned Parenthood blueprint” to force taxpayers to fund birth control was underway, as recounted by the New York Times:

Whatever the merits of the argument, the ghetto approach is now the federation’s chief thrust, and it is also the policy of the Federal Government, which since 1966 has undergone a dramatic reversal,  moving from almost no action on birth control to a proposed expenditure in 1969 of $31 million. Last month the Department of Health, Education and Welfare (HEW) recommended the adoption of Planned Parenthood’s “blueprint” for supplying free birth control device to some five million American women below the poverty line.

The “plan” was highly criticized by the Black community, which saw the move as a means of racist Black genocide.  “Among other things, this policy has brought the Planned Parenthood Federation under attack from black militants who see ‘family planning’ as a euphemism for race genocide,” the NYT reported.

To prove the genocidal fear had merit among minority groups, the paper published statistics that supported “the suspicion that Black people are taking the brunt of the ‘planning.'” Black birth rates fell in several cities:

A 1966 internal memo from Alan Guttmacher and Fred Jaffe outlined a new “community relations program” for winning over the Black community by “form[ing] a liaison between Planned Parenthood and minority organizations.” The plan, according to Planned Parenthood, was to emphasize that “all people have the opportunity to make their own choices,” rather than, as the memo states, “exhortation telling them how many children they should have.”

Guttmacher said at the time that the plan was “long overdue” but stressed, “we do not need to panic. In fact, if we panic and continue to publicize the ‘problem’, we may well exacerbate it.”

Also in 1966, Planned Parenthood gave its Margaret Sanger Award to Martin Luther King, Jr. Whatever Planned Parenthood was trying to accomplish, it worked. By 1969, then Congressman George H.W. Bush (R-Texas) chaired the Republican Task Force on Population and Earth Resources, created in part to ascertain the resistance to family planning among “certain groups.” He determined that “[s]o far, it looks like opposition from religious groups and the Black militants isn’t too serious.”

Planned Parenthood’s “blueprint” called for an expenditure of about one percent of the nation’s health budget, with an anticipated $78 million from taxpayers in 1970. It also called for an expansion of hospitals’ family planning services as well as programs financed by the federal anti-poverty program. By 1970, the United States House of Representatives voted 298 to 32 to approve the Family Planning Services and Population Research Act, Title X of the Public Health Service Act, authorizing federal dollars to pay for family planning services for low-income women. This legislation would become known as the Title X statute, which today allocates millions of federal tax dollars to Planned Parenthood and other family planning organizations. 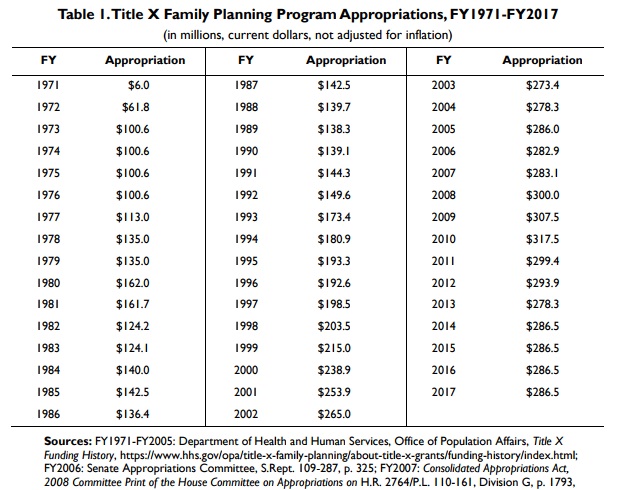 Although Federal law prohibits the use of Title X funds in programs where abortion is a method of family planning, recipients of the dollars can be abortion providers. The reason for this is that Title X requirements allow recipients of these federal dollars to discuss abortion with patients under the term “options counseling,” telling providers that they must offer pregnant women the opportunity to receive information and counseling on each of the following options:

In other words, Planned Parenthood can use the same rooms within the same facilities to commit abortions as they do to perform “options counseling,” during which they can refer for abortions as well as provide tax-funded family planning services under Title X.

Despite deceptive marketing from politicians who claim that defunding the abortion corporation would hurt women, studies show that women do not need Planned Parenthood to get contraception care. Despite Planned Parenthood’s desperate attempt to reinvent itself as a health care provider, it is the number one provider of abortions in the United States, claiming 35 percent of the abortion market share nationwide. The organization has millions of dollars in excess revenue each year (despite its being classified as a nonprofit organization), and has recently boasted of the private donations flooding into its coffers.

In addition, actual health care services at Planned Parenthood are dwindling while abortions are increasing. In addition, Planned Parenthood is not a trusted recipient of tax dollars, with its history of fraud and abuse and its failure to report suspected child abuse (which Live Action News reported about here and here) — a reason that alone should result in the organization losing taxpayer dollars under Title X.

Planned Parenthood’s free birth control scheme has resulted in millions upon millions in taxpayer funding each year. Instead of those dollars doing good for women, they are aiding an abortion corporation which ends the lives of hundreds of thousands of innocent preborn babies every year. That is not a blueprint that anyone should follow.

Live Action News has written additional articles on this topic that include the history of Title X (Parts one, two, three, and four) as well as George HW Bush’s relationship to TitleX and Planned Parenthood.