If donations are flooding into Planned Parenthood, maybe they don't need our tax dollars

The news media is turning themselves inside out to report on how Planned Parenthood supporters are flooding the abortion business with donations in lieu of a Trump administration. And my response to this is to ask: If Planned Parenthood has so much support from donations, then do they really need half a billion in federal taxpayer dollars?

On average, since 2000, Planned Parenthood has received 37.5 percent of its revenue from the American taxpayer ($553.7 million dollars last year alone) and 26 percent from private donations: 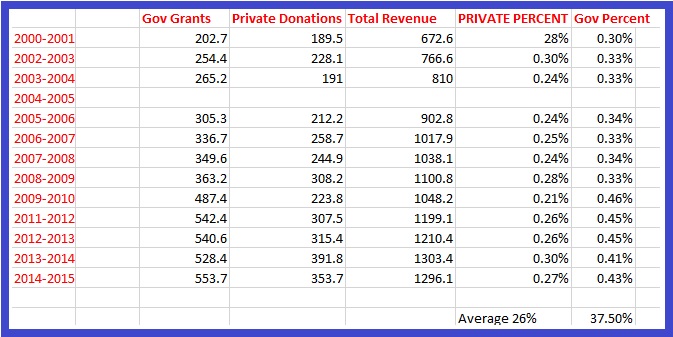 Planned Parenthood is, of course, thrilled with the donations. According to Time Magazine:

Planned Parenthood President Cecile Richards called the outpouring of support “unprecedented.” The organization has received nearly 80,000 donations, many of them in Vice President-elect Mike Pence’s name as a means of speaking out against a controversial anti-abortion law he passed. According to Cosmopolitan, women are sending their receipts from the donations to his office in Indianapolis.

Newsweek had this to say:

Planned Parenthood has not commented on the amount or number of donations in Pence’s name, and did not respond to Newsweek’s request for comment. However, the organization tweeted on Saturday that it’s been “blown away by the support we’ve received,” and said donations are coming in both in Pence and Hillary Clinton’s names. 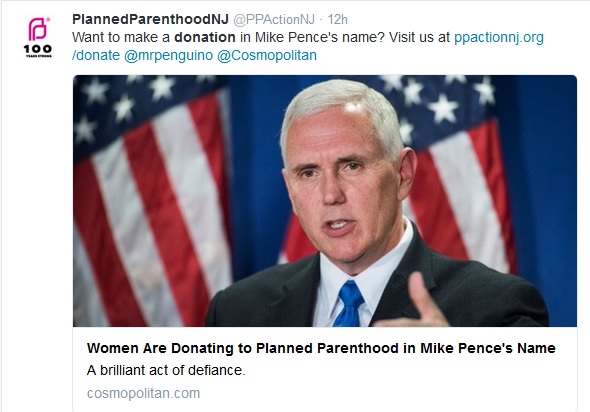 Planned Parenthood may not have “commented on the amount or number” of donations they’ve received, but they certainly haven’t wasted any time in capitalizing on the donation trend, as seen in a tweet from Planned Parenthood of New Jersey (pictured left).

In Texas, Reuters reports that online donations to Planned Parenthood in the state “have tripled,” while Sarah Wheat, spokeswoman for Planned Parenthood of Greater Texas, told HuffPo, “We have been overwhelmed by community members making donations and contacting us to offer to volunteer and provide support.”

With all this ‘good’ news, one could assume that Planned Parenthood owes President-elect Donald Trump a “thank you,” given that his election has brought the nation’s largest abortion chain this windfall. And donations to Planned Parenthood are arriving just in the nick of time, since the organization just sunk $30 million dollars into a failed attempt to elect Hillary Clinton as president.

So, what will Planned Parenthood supporters get for their hard-earned donations? The answer is of course, more abortions.

The truth is that if people really wanted to help women obtain important medical care, Planned Parenthood would not be the place to invest. After all, the organization does a pitiful job at providing much needed “health care services” for women. According to a Live Action analysis of services provided by Planned Parenthood:

Michelle-Hanson also noted that Planned Parenthood’s 12 highest paid employees all earn six-figure compensation totaling almost half a billion dollars. The organization is clearly not in dire need if it can afford to pay its executives so generously. 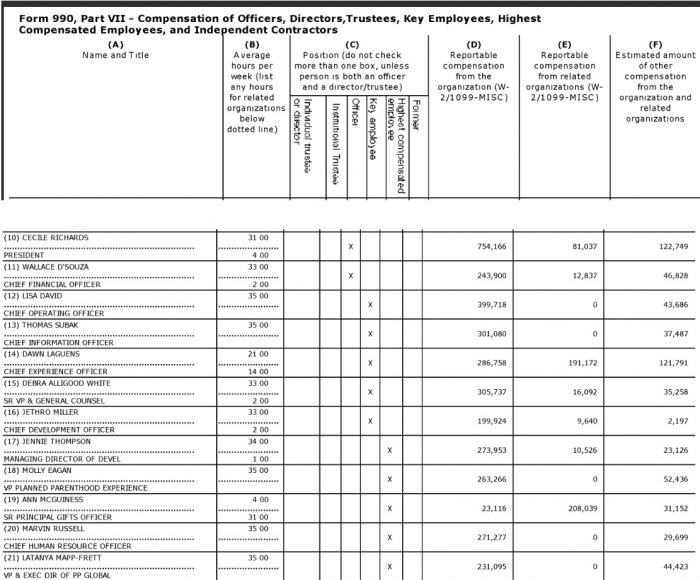 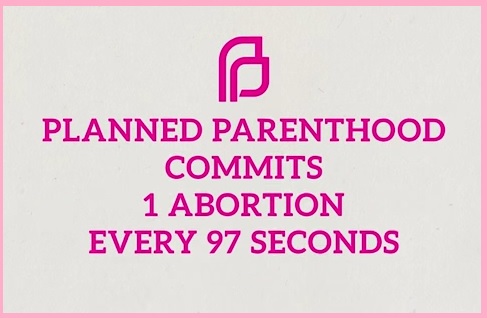 If President-elect Trump keeps his promise to defund them, it looks like they may have to.