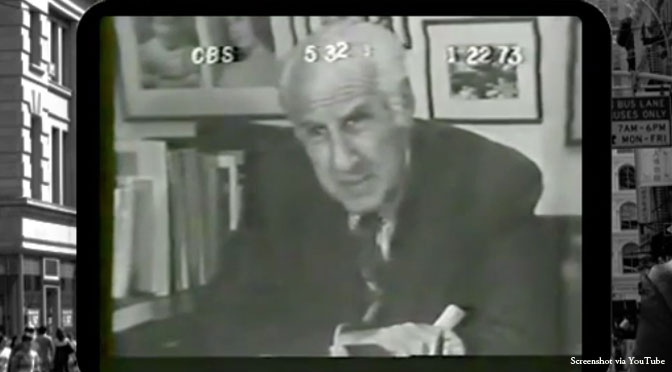 A news report which aired just following the infamous Roe v. Wade ruling legalizing abortion nationwide shows that Planned Parenthood has long viewed abortion as positive for women and for society (and long ignored the humanity of the preborn child), despite the harm abortion does to women’s bodies and the fact that it kills preborn children. Alan F. Guttmacher, MD, served as Planned Parenthood Federation of America’s president from 1962–1974. Journalist George Herman’s CBS News Report (below) which was unearthed by Issues for Life, shows Guttmacher, as head of Planned Parenthood, responding to the ruling (which Walter Kronkite noted overturned the abortion laws of 46 states):

I think that to raise the dignity of woman and give her freedom of choice in this area is an extraordinary event. I think that Jan 22, 1973, will be a historic day.

The “dignity of women”? An interesting phrase to use, given the fact that Guttmacher was also a Vice President for the American Eugenics Society, and said just six years earlier at a 1967 forum at Harvard Law School:

The American Eugenics Society pushed the ideals of eugenics – that some people were “fitter” than others – and “sponsored eugenic health exhibits… [including] a board titled ‘Some people are born to be a burden to the rest,’ on which lights were set to blink at periodic intervals representing how often a ‘defective’ was born in the United States (rapid blinking) and how often a ‘high grade’ individual was born (slow blinking).”

A 1967 article in the Harvard Crimson quoted Alan Guttmacher speaking at the Harvard Law School Forum, stating that most abortions prior to legalization were performed by “reputable physicians” – something that was downplayed as advocates pushed legal abortion as being safer than illegal abortion:

Seventy per cent of the illegal abortions in the country are performed by reputable physicians, each thinking himself a knight in white armor.

At the same event, Guttmacher asked for liberalization of abortion laws, but not for outright repeal, stating, “To allow abortion on demand would relegate man to the status of the bull.” Guttmacher later said that, “Abortion should be a back-up procedure for failed or failure-to-use effective contraception. It must never be the primary method of birth control.” (Source: AMA Congress on Environmental Health, May 4-5, 1970 speech by Alan F. Guttmacher, Page 63.)

In a sobering warning, George Herman ended the CBS report on the passage of Roe with these words: “If the experience of New York State is any guide, America will eventually have one abortion for every two births.”

Interestingly, Guttmacher also stated in 1970, “We look forward to the time when our clinics can be closed, when the government can fund enough money to serve the poor and research new birth control methods.”

Pro-lifers, too, look forward to the day when Planned Parenthood will be closed, along with all other abortion facilities, and all children, born and preborn,  are protected by law.