The media seems to be doing an effective job of rightfully condemning many people who have an association with the Ku Klux Klan — but one exception to this seems to be Planned Parenthood’s “beloved” founder, Margaret Sanger. Margaret Sanger is usually described as a “birth control pioneer” who founded Planned Parenthood, but she also met with members of the Klan, advocated eugenics, and supported the use of sterilization to rid the planet of the “unfit.” Sanger wrote about her meeting with the Klan in her autobiography. Yet somehow this fact is made light of, glossed over, or completely ignored by the media. 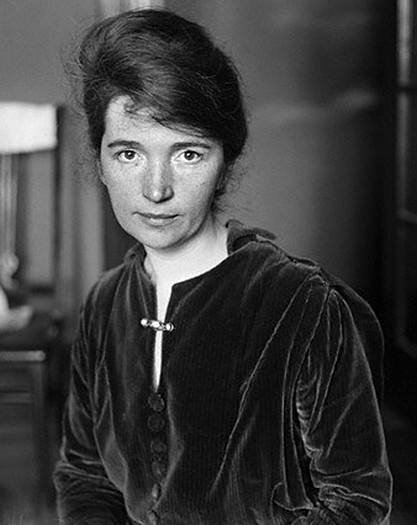 On page 366 of her autobiography, Sanger described her meeting with the Klan, where she says she received additional invitations to speak with similar groups:

I accepted an invitation to talk to the women’s branch of the Ku Klux Klan…. I saw through the door dim figures parading with banners and illuminated crosses…. I was escorted to the platform, was introduced, and began to speak…. In the end, through simple illustrations I believed I had accomplished my purpose. A dozen invitations to speak to similar groups were proffered.

What about Sanger’s outspoken support for eugenics?

While some may not be entirely familiar with the meaning of “eugenics,” it’s likely that those same people have seen it in action in various ways. Coined in the mid 1800’s by Francis Galton, the cousin of Charles Darwin, eugenics was a popular movement to create a society in which those who were considered “superior” would reproduce… while those who were deemed “inferior” would be encouraged not to reproduce. Tragically, this movement was credited with forcefully sterilizing many men and women. The targets of these horrendous acts were disproportionately Black and poor, according to many reports. 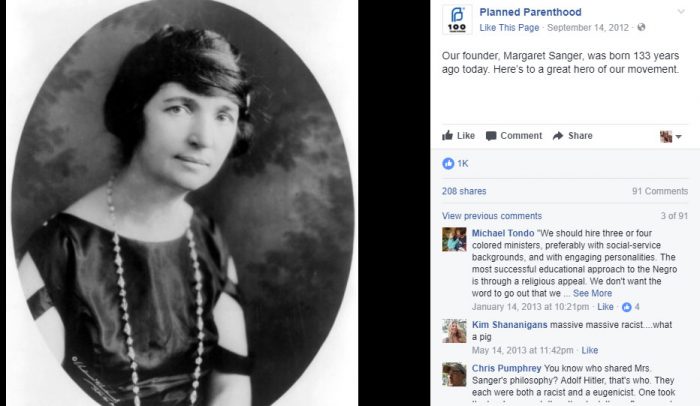 Eugenics victim Elaine Riddick speaks in the video below about being “cut up like a hog,” thanks to the philosophy of eugenics. Riddick, like some other Black citizens, was forcibly sterilized in North Carolina in 1968. Her tearful testimony encouraged state lawmakers to vote for reparations for those like her, who were eugenically sterilized.

In Margaret Sanger’s “Birth Control and Racial Betterment,” the Planned Parenthood founder links the goals of eugenics with her own goals of promoting birth control, writing (emphasis added):

We who advocate Birth Control, on the other hand, lay all our emphasis upon stopping not only the reproduction of the unfit but upon stopping all reproduction when there is not economic means of providing proper care for those who are born in health. …While I personally believe in the sterilization of the feeble-minded, the insane and syphilitic, I have not been able to discover that these measures are more than superficial deterrents when applied to the constantly growing stream of the unfit… Eugenics without Birth Control seems to us a house builded upon the sands. It is at the mercy of the rising stream of the unfit…. 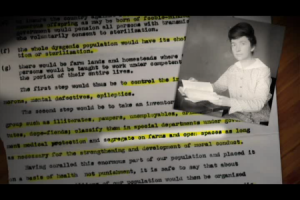 Sanger was highly motivated to stop the procreation by those she deemed “unfit.” In a personal letter to Katharine Dexter McCormick in 1950, Sanger called for “a simple, cheap, safe contraceptive to be used in poverty stricken slums, jungles, and among the most ignorant people.”

But, Sanger added, “Even this will not be sufficient, because I believe that now, immediately, there should be national sterilization for certain dysgenic types of our population who are being encouraged to breed and would die out were the government not feeding them.”

In 1932, Sanger also called for those who were poor (and those she considered to be “morons and immoral”) to be shipped to colonies where they would live in “Farms and Open Spaces” dedicated to brainwashing these so-called “inferior types” into having what Sanger called better “moral conduct.”  She specifically wanted to keep “immigration closed to the entrance of certain aliens whose condition is known to be detrimental to the stamina of the race.” (“A Plan for Peace,” by Margaret Sanger, published in Birth Control Review (BCR) April 1932, pp. 107-108)

Sanger was more than just a passive observer where eugenics was concerned; she was a member of the American Eugenics Society and even tried to unite her efforts and her publication with the eugenics movement.

Of interest is that fact that, Nazi leader Adolf Hitler was so influenced by Whitney that he sent him a letter complimenting him for a book he had written on sterilization. 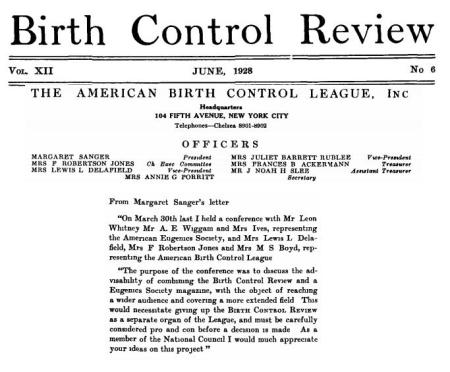 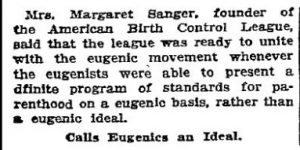 The New York Times recorded Sanger’s desire to unite with the eugenics movement as well, in an April 1, 1925, article:

Mrs. Margaret Sanger, founder of the American Birth Control League [ABCL], said that the league was ready to unite with the eugenic movement whenever the eugenists were able to present a definite program of standards for parenthood on a eugenic basis, rather than a eugenic ideal.

Another example where Sanger’s desire to unite with the eugenics movement can be seen is in this ABCL publication from 1935 (below), calling for a resolution that Sanger’s American Birth Control League (which later became Planned Parenthood), “unite with the American Eugenics Society.” 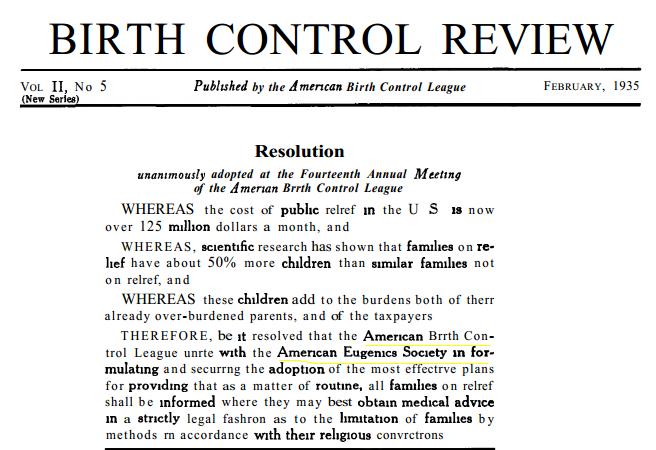 Sanger made certain that eugenics movers and shakers were deeply embedded in her organization, as Live Action News has previously documented. Below is a sample list of American Eugenics Society founders, leaders, and members who were a part of Margaret Sanger’s board or organizations:

In addition to Sanger’s connections, Live Action News has documented that many of Planned Parenthood’s officials were members or leaders of the American Eugenics Society. (See a partial list here.)

Since the 1960’s, Planned Parenthood has granted its infamous Margaret Sanger Award (calling it their top award) to people who benefit the organization’s cause.

Probably the most well-known recipient of the Margaret Sanger award in more recent times is Hillary Clinton, who said during her acceptance of the award that she “admired Margaret Sanger.” Republicans called her out for her comments, and Clinton responded by making disparaging remarks about Thomas Jefferson instead of repudiating Sanger’s push to eradicate the “unfit.” In the video below, Clinton pays homage to Sanger:

In 2014, then-Speaker of the House Nancy Pelosi accepted the Margaret Sanger award, despite Sanger’s clear support for a hideous eugenic philosophy and associations with the Klan. Pelosi referred to the largest abortion corporation in the nation as an “outstanding organization,” suggesting that Sanger’s philosophy paved the ideology behind Planned Parenthood: “Out of this philosophy and outlook emerged the spirit and driving force of what would become known as the Planned Parenthood Federation of America.” Pelosi added, “To be associated with the great Margaret Sanger is a distinct privilege.” 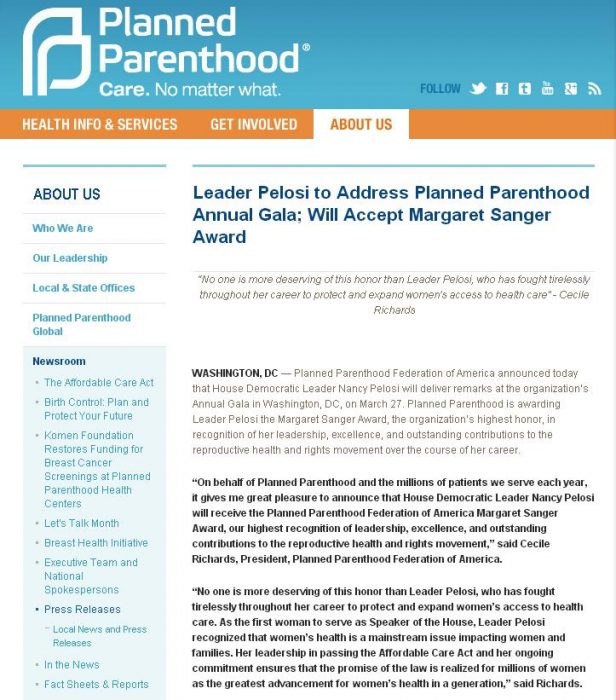 In 2004, the founder of CNN, Ted Turner, received the Margaret Sanger Award. The “honor” was mentioned in Planned Parenthood’s 2004 annual report:

Today, Planned Parenthood will defend their founder by pointing to civil rights giants like Martin Luther King, Jr., who also received the Margaret Sanger award. But the full picture and agenda of Sanger and her Planned Parenthood organization were not obvious to many in the Black community at that time, including MLK.

However, despite the suspicious timing of the award to MLK, many Black leaders have since spoken against the birth control and family planning agenda of Planned Parenthood, even calling abortion a form of “black genocide.”

Given this information and much more, when will the media demand recipients of this hideous award return it to Planned Parenthood? And, even more important, when will Congress cut ties with Planned Parenthood and stop sending them half a billion in tax dollars every year?