Planned Parenthood’s political mouthpieces often tout the organization’s virtually nonexistent services, like prenatal care, to justify the the half a billion taxpayer dollars annually that is funneled to the abortion corporation. However, as previous Live Action investigations have shown, what the organization’s PR machine claims and what it actually offers to women in need are often two very different things.

A newly released Live Action video compares two things: what politicians say when selling the ‘virtues’ of Planned Parenthood to their constituents and colleagues, and what women actually hear when they call or visit Planned Parenthood.

The truth these politicians fail to state is that while federal taxpayer dollars to Planned Parenthood doubled in the span of ten years — from $272.7 million in 2004 to $553.7 million in 2014 — health services like prenatal care and cancer screenings declined sharply.

Live Action previously documented that prenatal care is virtually nonexistent at Planned Parenthood. In fact, 92 out of 97 locations called by Live Action investigators turned away pregnant women who wanted to keep their babies.

In 2015, Rep. Ron Wyden came to the House floor and insisted that “prenatal services” would be “gone” if Congress defunded Planned Parenthood — as if women can’t get prenatal services from other healthcare providers. What Wyden needs to know is that despite receiving half a billion taxpayer dollars annually, prenatal care is virtually gone from the organization already.

Rep. Joe Kennedy must have also missed that memo when he touted prenatal care services at Planned Parenthood that same year. And in 2017, Kennedy listed breast exams (another dwindling service at Planned Parenthood) to justify funding the organization. (More on that later.)

In 2011, Senator Patty Murray claimed that Planned Parenthood not only provides prenatal services but also mammograms to make her funding case to Congress (emphasis added):

Planned Parenthood is about providing federal funds for care like mammograms and cervical cancer screenings and prenatal care and family support and counseling.

There are two problems with those claims: 1) prenatal services plummeted nearly 44 percent between 2010 and 2014, and 2) Planned Parenthood has NEVER performed mammograms, a fact the organization’s president Cecile Richards admitted while testifying before Congress in 2015:

Secretary of State Hillary Clinton also pulled the “prenatal care” card while throwing her support behind Planned Parenthood. In her speech to members of the Democratic Women’s Leadership Forum, the former presidential candidate described what “access to health care” should look like, including, “basics like reproductive care and birth control and prenatal care and cancer screenings,” adding, “That’s why we have to defend Planned Parenthood.”

Planned Parenthood is often the only option for women to get their annual checkup. It provides breast exams, contraception, prenatal care, cancer screenings, and testing for sexually transmitted diseases, including HIV. 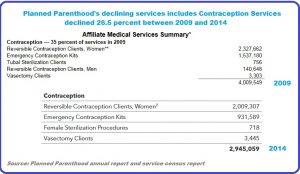 In addition, several of the other services Feinstein mentioned are declining.

Breast exams fell by a stunning 60.7 percent between 2004 and 2014, despite politicians’ attempts to use these services as justification for Planned Parenthood’s continued funding.

Senator Angus King also whipped out the “prenatal services” card when he defended Planned Parenthood against accusations made by the Center for Medical Progress (CMP), which claimed Planned Parenthood was selling aborted baby body parts. Sen. King, however, admitted to CNN anchor Chris Cuomo that he had not even “seen the cuts” of the CMP videos, all while attempting to defend Planned Parenthood for supposedly providing “all kinds of prenatal and health care screening for women.”

All kinds? Just how did Senator King come to that conclusion? Perhaps in addition to screening the CMP videos, Senator King also needs to actually look at Planned Parenthood’s annual reports, which show this is not the case.

Well, guess what. No federal funding goes to abortion. So when you defund Planned Parenthood you’re just defunding the over 97 percent of what they do that is not abortion, meaning you defund pregnancy tests, you defund birth control, you defund screenings for breast cancer and cervical cancer and ovarian cancer, you defund vaccinations, you defund access to referrals to other hospitals and specialists, and you deny prenatal care….

The Congressman has it all wrong. Defunding Planned Parenthood wouldn’t deny prenatal care to women; Planned Parenthood is already doing that on its own. Instead of making sure that its affiliates offered prenatal care for patients, in 2011, the organization stated it would require all of its affiliates to offer abortion by 2013. Statistics show that despite a decrease in prenatal services (from already low numbers), the organization committed 323,999 abortions in 2014 — an increase of 27 percent from 2004.

But Deutch’s statement also contains several other misleading facts. Federal dollars are indeed funding abortions, and Live Action has debunked the myth that abortions are only a small percentage of what Planned Parenthood does. Aside from this, women can go to a myriad of places to get pregnancy tests; why would anyone pretend Planned Parenthood is the only location where these can be obtained (especially when approximately 2,200 pregnancy resource centers offer them for free)?

Regarding cancer screenings, Live Action’s recent video release shows that overall, cancer screenings at the abortion corporation have been decreasing rapidly, by more than 68 percent (2004-2014). 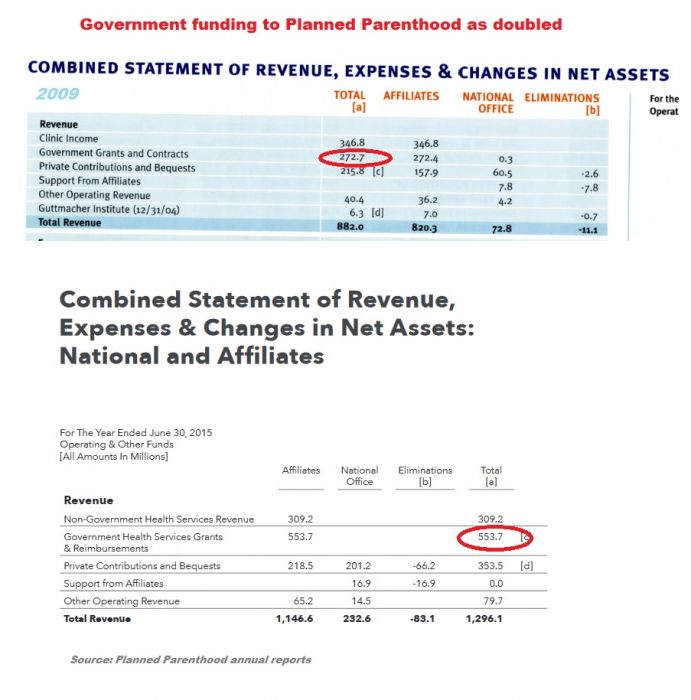 Taxpayer-funded health centers, as identified by the federal Health Resources and Services Administration (HRSA), are far more deserving of federal taxpayer dollars than an organization whose patients and health care services (other than abortion) are declining, and have been for a decade. Consider the following:

Despite a substantial increase in taxpayer dollars from Government programs to the abortion corporation, Planned Parenthood has been netting a profit for many years, exceeding its expenses — not just by a few dollars, but by tens of millions of dollars (yearly surpluses range from $12.2 million in 2001 to a high of $155.5 million in 2010).

It’s a mystery why politicians continue to spotlight virtually nonexistent and declining services at Planned Parenthood. Perhaps they get away with it because the mainstream media fails to fact check them. The truth is that prenatal care isn’t even offered at most Planned Parenthood facilities, and several of the organization’s other services, like cancer screenings, have been decreasing for years.

So what does all this information really show? It shows that Planned Parenthood, the organization which commits 34.9 percent of the nation’s abortions, does not need tax dollars to survive; those same dollars would be better used at federal health centers. It’s time to defund Planned Parenthood.