Was there a sinister eugenics agenda behind so-called federally funded “population control” programs like Title X?  The program, which could be seen as a form of classism, is touted as a “family planning”program aimed at “helping” poor and low income Americans in limiting their families. But the question is, what motive was behind this push prior to Title X’s 1970 passage, and who were the key players? In this four part series, Live Action News hopes to answer those questions.

When the push to use government dollars to fund population control programs was introduced, there was heavy opposition from groups that saw the move as racist eugenics. The Population Council and Planned Parenthood, two of the main groups behind this move, were both founded with eugenic philosophies. Planned Parenthood even played a prominent role in recruiting an ideal Republican lawmaker — as readers will learn later in the series — whom they convinced to sponsor what has become known as the federal Title X Family Planning Program, which now funnels $60 million to the organization.

Leading up to this time, many within the Black community viewed government programs of population control as genocidal efforts aimed at limiting the births of Blacks and other minorities. This was not without justification, as detailed by Simone M. Caron’s research, “Birth Control and the Black Community in the 1960’s: Genocide or Power Politics?,” published by the Journal of Social History:

Certain segments of the black community mistrusted the underlying intention of both private and government efforts with respect to contraception. Some blacks in particular became skeptical of the increasing push for contraceptive dispersal in poor urban neighborhoods, accusing contraceptive proponents of promoting nothing less than “black genocide.”…

The incidence of increasing government involvement in contraception at the same time as the civil rights movement gained strength could be interpreted as a planned conspiracy to decrease the numbers of blacks and other racial minorities.

Leaders of the birth control movement even suggested that crime and health disparities within the Black community could be resolved by reducing the Black population. This kind of thinking aroused additional suspicion as calls for public health centers to disseminate birth control pills to the poor began to emerge. 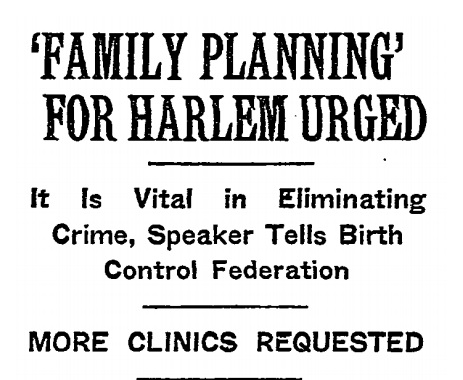 In 1967, Black comedian Dick Gregory joined more than 1,100 Black delegates for the First National Conference on Black Power where he, along with others in the group, adopted a black power manifesto that called for the “refusal to accept birth control programs on the basis that they seek to exterminate Negroes,” among other demands, according to a July 24, 1967, New York Times report. Gregory and others viewed “government programs designed for poor Black folks” which emphasized birth control and abortion as, “designed to limit the black population.” 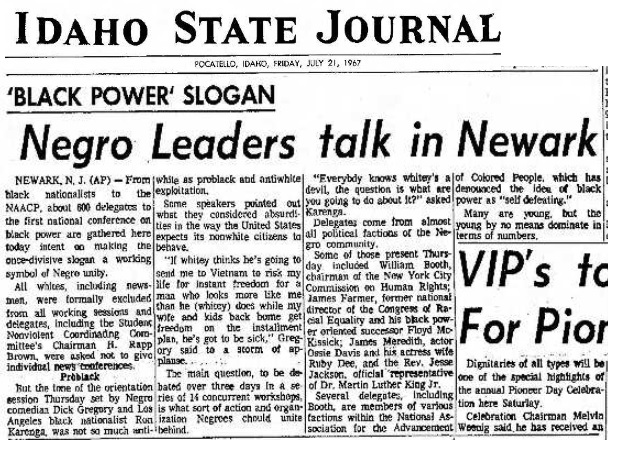 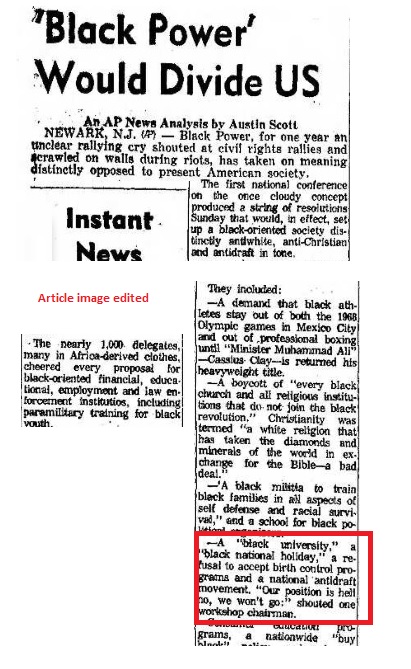 Journalist Samuel Yette, himself outspoken about the genocidal aspects of birth control, once wrote about noted civil rights activist Fannie Lou Hamer’s views in The Afro American – Apr 2, 1977, saying, “It is still a society in which an injured man must show his ability to pay before getting hospital services, but his daughter or wife can be aborted or fed birth control pills, at public expense….”

In that same article, Yette, one of the first Black journalists to work for Newsweek, wrote, “Instead of seeking ways to feed the hungry, the back stage plan was to get the poor unwittingly to endorse a plan to eliminate from the society those who were hungry.” 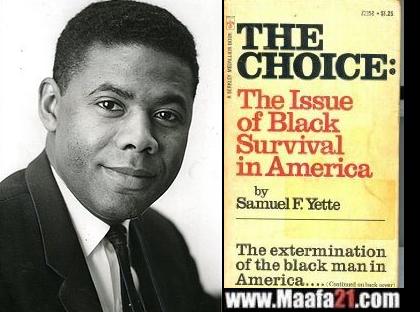 Yette went on to publish a book, “The Choice,” which exposed high level attempts of Black genocide through birth control, abortion, and additional means. Shortly after the publication, Yette was fired by Newsweek and claimed that his superiors told him that the “Nixon White House” wanted him out of Washington.

“The book dealt with things they did not want people to know about at the time,” Yette told the Tennessee Tribune, which he joined as a columnist, in 1996. “There were those well-placed in our government who were determined to have a final solution for the race issue in this country — not unlike Hitler’s ‘Final Solution’ for Jews 50 years earlier in Germany. I wrote this and documented it. It caused the Nixon White House to say to Newsweek in effect, ‘Don’t come back until you are rid of him.’”

Blacks were highly suspicious of anything that had to do with “control,” radical Black Muslim leader Malcolm X suggested. In 1962, Wylda B. Clowes, a Black field consultant for Planned Parenthood, and Mrs. Marian Hernandez, director of the Hannah Stone Center, met with Malcolm X to “discuss with him his group’s philosophy concerning family planning.” Memos from the meeting indicated that overpopulation discussions evoked questions on why major efforts to control population were directed toward “colored nations.” The Black Muslim leader asked if Planned Parenthood had anything to do with “birth control” and offered the suggestion that Planned Parenthood would probably be more successful if they used the term “family planning” instead of “birth control.”

His reason for this was simple. He stated that “people, particularly Negroes, would be more willing to plan than to be controlled….”

While Caron concludes that the Black community eventually accepted contraception, a look at the organizations behind the push for government funded “family planning” programs reveal that their initial concerns may have been spot on. Behind the scenes, population control groups — some with long ties to the eugenics movement, such as the Population Council, Planned Parenthood, the Hugh Moore Fund, the Ford Foundation, the Rockefeller Foundation, and others  — were seeding the ground and calling for large sums of government money to be spent on so-called “family planning.”

Author Donald T. Critchlow, in his book, “Intended Consequences, Birth Control, Abortion and the Federal Government in Modern America,” notes that the Population Council took the lead, and had an annual budget of over $3 million by 1964. Ford and Rockefeller Foundation money, along with dollars from other eugenics organizations, were flooding the Population Council coffers by the millions.

The Population Council was founded in 1952 by John D. Rockefeller III, as Live Action News has previously documented. The group’s second president, Frederic Osborn, was a founding member of the American Eugenics Society. Osborn once wrote, “Eugenic goals are most likely attained under a name other than eugenics.” He also signed Margaret Sanger’s “Citizens Committee for Planned Parenthood,” published in her Birth Control Review in April of 1938. Some speculate that Planned Parenthood’s infamous slogan, “Every Child a Wanted Child,” may have originated with Osborn. 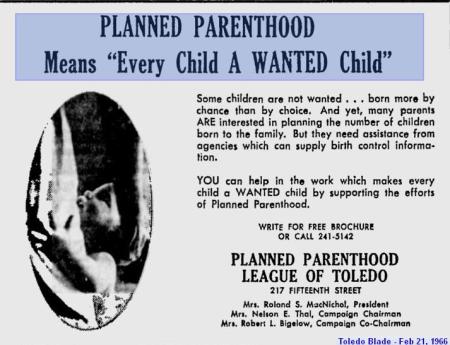 These groups pushed the idea of a worldwide population crisis. The media joined in the fear mongering by publishing articles about the impending population crisis. Images of global starvation resulting in forced euthanasia and cannibalism were depicted in books such a Paul Ehrlich’s now discredited “The Population Bomb.” 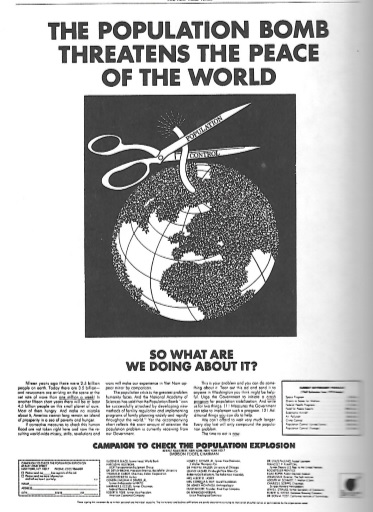 On-screen gloom and doom propaganda was also being disseminated.

One film, produced by Walt Disney Productions, has been detailed in a previous Live Action News article, and interestingly, the controversial 1967 film, “Family Planning,” was produced in association with the Population Council, a eugenics founded organization.

The propaganda film featured Disney’s iconic animated character, Donald Duck, who introduces the alleged gloom of having a large family. Children in smaller sized families are “healthy and happy and go to school to gain an education,” the film states, as if children of large families are unhealthy, unhappy, and uneducated. The film indoctrinates its viewers that a “happy family” is one with a modest number of children while large families basically starve with “no money for modern conveniences. […]”

In the 1969 book about the founder of Planned Parenthood, “Margaret Sanger Pioneer of Birth Control,” authors Lawrence Lader, an advocate of population control with ties to the Population Council, and Milton Meltzer reinforced overpopulation fears.

Today the world has caught up with the crucial necessity for population control. Many political leaders consider it second only to the threat of nuclear war as the key issue of our time. World population is now growing at a record speed of seventy million a year. The terrible prophecy is that at the current rate of increase the world may double in population by the year 2000. Yet less than 5 percent of the world’s six hundred-odd million women in the fertile years are using modern contraceptives. To Dr. Harrison Brown, one of the nation’s leading scientists, it means “catastrophe appears a near certainty.”

Latin America, whose growth is faster than any other continent’s, will almost triple its population in the next three decades. And less food is now produced and eaten there per capita than before World War II. India, kept from the edge of famine by wheat shipments from abroad, will add two hundred million more people by 1980.

With this tidal wave of population goes desperate hunger. One half of the world’s population and two thirds of its children go to bed hungry every night. General William H. Draper, head of a presidential study committee, has said that “the stark fact is that if the population continues to increase faster than food production, hundreds of millions will starve in the next decade.” 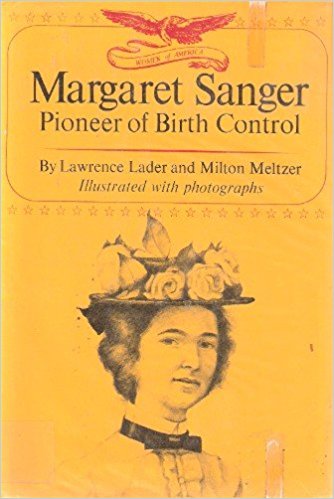 The United States has already added fifty million between 1950 and 1968, and our population may almost double by the year 2000. We may not face famine because of our highly mechanized food production. But the terrible overcrowding in the cities has already brought us the destructive problems of air and water pollution, traffic chaos, shortage of schools and houses, lack of parks and recreation space. The whole quality of American life is being badly damaged.

The authors then summarize the solution:

Almost everyone now realizes that Margaret Sanger’s crusade for population control is the only way to enable living standards to improve substantially. International Planned Parenthood has already shown in many areas that populations can be kept in reasonable balance…. After the government approved legalized abortion in qualified hospitals, along with contraception, the country cut its birth rate more than in half between 1947 and 1961.

The need has become so staggering that IPPF has been joined by new allies. First came the private organizations. The Population Council, headed by John D. Rockefeller III, has spent over thirty-five million dollars since 1952, the Ford Foundation many millions more.

They end the book by making an argument for federal dollars to fund population control:

But the money needed to spread birth control around the world goes far beyond private means. Hugh Moore’s Campaign to Check the Population Explosion and the Population Crisis Committee in Washington soon realized that only vast help from the federal government could meet the crisis. With constant pressure on Congress, they were able to get the government to increase its population programs overseas to fifty million dollars in 1969. Family planning programs in the United States were given ten million dollars. Yet even these sums are only a tiny fraction of what it will take to meet the problem.

And thus, the push for taxpayer-funded population control programs took on a life of its own and consisted of a multitude of characters working behind the scenes, forming coalitions, meeting with political leaders, and spreading eugenics propaganda. By the 1960s the agenda was in full swing, but it would be continually met with opposition from religious leaders and Black leaders who recognized it as a means to control the Black population.

In part two of this series, Live Action News will detail further the population control advocates who pushed for these government funded programs. Additional articles on Title X’s history are included (parts one, three, and four), as well as Planned Parenthood’s Blueprint and George HW Bush’s relationship to Title X and Planned Parenthood.