A new Live Action video release unmasks the oft-repeated claim that taxpayer dollars sent to Planned Parenthood do not fund abortions. The abortion corporation, which masquerades as a “health care” provider, receives half a billion dollars in government money annually, which they claim is merely reimbursement for services rendered under Medicaid. The largest provider of abortions, garnering 35 percent of the nation’s market share, implies that these funds do not pay for abortions.

But the hundreds of millions in government dollars Planned Parenthood receives are fungible, acting to free up other dollars which would normally be used for salaries, facility rent, and general overhead. Planned Parenthood nets millions of dollars in excess revenue almost every year.

Watch the Live Action video below to get a better understanding of fungibility and how our tax dollars do, in fact, pay for abortions:

Planned Parenthood often points to the federal Hyde Amendment (which they are working to overturn) as the iron-clad prohibition guaranteeing that no tax dollars will fund a single abortion.

But that deception was dismantled previously by Live Action News and again in the Live Action video above, which points out that there are several ways tax dollars pay to end the lives of preborn children in the womb:

In part one of the “Fungibility Factor” series, we will take a closer look at how Title X family planning dollars fund abortion facilities and facilitators, a fact clearly stated on Planned Parenthood’s own website, which shows that some centers themselves are “funded in part by Title X.”

In addition to funding Planned Parenthood centers, Title X requirements allow recipients of these federal dollars to discuss abortion with patients under the term “options counseling,” telling providers that they must offer pregnant women the opportunity to receive information and counseling on each of the following options:

Live Action investigators had several conversations with Title X-funded Planned Parenthood centers (summarized below), which are supposed to offer information and counseling on all pregnancy options:

Misuse of Title X Funds at Planned Parenthood or Squeaking by With Shared Facilities?

Title X requirements also allow providers to refer for abortions. The only stipulation is that the Title X provider cannot actually schedule the abortion or provide additional assistance to the woman unless the abortion is “medically indicated”:

Where a referral to another provider who might perform an abortion is medically indicated because of the patient’s condition or the condition of the fetus (such as where the woman’s life would be endangered), such a referral by a Title X project is not prohibited by section 1008 and is required by 42 CFR 59.5(b)(1). The limitations on referrals do not apply in cases in which a referral is made for medical indications.

(Just what Planned Parenthood believes about which abortions are “medically indicated” may shock you, and it will be discussed in a future Live Action News piece.)

Abortion clinics can be recipients of Title X funds, under the requirements:

Certain kinds of shared facilities are permissible, so long as it is possible to distinguish between the Title X supported activities and non-Title X abortion-related activities:

(a) A common waiting room is permissible, as long as the costs properly pro-rated;

In other words, Planned Parenthood can use the same rooms within the same facilities to perform abortions, perform “options counseling” where they can refer for abortions as well as provide tax-funded family planning services under Title X.

There are many examples online of “shared facility” Planned Parenthood centers which receive taxpayer Title X dollars and perform abortions under one roof: 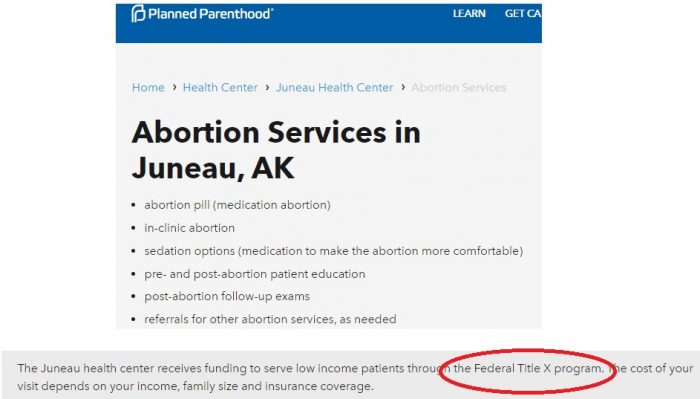 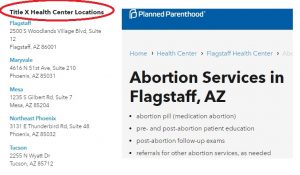 In addition to counseling for abortions, referrals for abortions, and a common facility or waiting room, Title X providers can also use common staff.

(b) common staff is permissible, so long as salaries are properly allocated and all abortion related activities of the staff members are performed in a program which is entirely separate from the Title X project;

How Your Tax Dollars Pay for Abortion

In other words, as long as the abortion corporation keeps the equivalent of two ledgers, your tax dollars can be used to pay for the same staffers that also help with and/or commit abortions.

Prorated salaries, same facilities, same staff, same waiting rooms and counselors — and we are supposed to believe that our tax dollars are not funding abortion?

This is insane logic.

What would happen if tomorrow the federal government sent half a billion dollars to the Klu Klux Klan for subsidies to “help the poor” so long as they “separated their funds” from the group’s racist activities?

Would anyone would buy the convoluted explanation that taxpayers aren’t funding racism, as long as the KKK separates the money into two piles? Of course not.

Neither should the American taxpayer believe that their government dollars aren’t paying for abortions.

Despite the desperate attempt to reinvent itself as a health care provider, Planned Parenthood is the number one provider of abortions in the United States, with 35 percent of the abortion market share nationwide. The organization has millions of dollars in excess revenue each year (despite its being classified as a nonprofit organization), and has recently boasted of the private donations flooding into its coffers.

American taxpayers need to know that the sky won’t fall if the largest chain of abortion clinics in the nation is defunded. President Trump and many Congress members promised American taxpayers they would defund this abortion behemoth, but to date, only the House has passed legislation to do so. Why?

Every day that the Senate drags its feet, Planned Parenthood receives $1.5 million of our tax dollars and ends the lives of approximately 900 precious preborn children.

The time to defund Planned Parenthood is now.