On Monday, Dr. Leana Wen, Planned Parenthood’s new president, responded to a vote on the Born-Alive Abortion Survivors Protection Act since thwarted by politicians beholden to the abortion corporation. Wen tweeted, “Today, the Senate will vote on a bill that criminalizes doctors for a practice that doesn’t exist in medicine or reality.” (emphasis added)

It takes deliberate ignorance to make such a claim, given the years of factual proof documenting how babies that survive abortion have been left on tables to die. But when you are protecting an abortion empire, you might say just about anything. 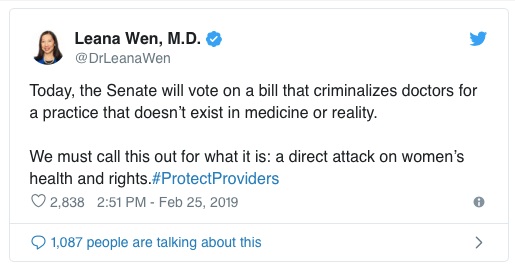 PP prez no such thing as Born Alive after abortion (Image: Twitter)

Wen’s claim that the legislation wasn’t needed because the practice of leaving a child born alive to die on a table after an abortion doesn’t exist is pure fabrication on her part. And she should know better. After all, it was just a few years ago that Planned Parenthood’s own Florida lobbyist was asked what would happen if a baby was born alive after a botched abortion.

Alisa LaPolt Snow, representing the Florida Alliance of Planned Parenthood Affiliates, responded, “We believe that any decision that’s made should be left up to the woman, her family, and the physician.”

She added, “That decision should be between the patient and the health care provider.”

In 2016, the chilling account of a baby born alive was caught on tape in a 911 call. The incident spurred calls for more governing of these incidents.

There have been numerous examples of these tragic stories over the years.

In states that require reporting of this information, multiple cases have been reported. While Dr. Wen seemingly ignores such state reports, including documentation by the Centers for Disease Control (CDC), she would find many stories if she searches for the so-called “dreaded complication.” Read many of those stories here. Here is a video about little Ana Rosa Rodriguez, who was born injured from a botched abortion.

Live Action News has documented multiple times how babies survived abortion attempts. Some of these survivors are alive today to testify to this fact, forming The Abortion Survivors Network. A group of these survivors appeared on FOX News recently to tell their stories, which can be heard here.

Live Action’s Inhuman investigation is even more evidence that the Born-Alive legislation is needed. Undercover journalists in several late-term abortion facilities exposed chilling admissions by abortion providers stating that they will end the lives of viable, fully developed children.