The abortion industry would like the public to believe that babies born alive after abortion attempts rarely occur. However, research shows that the so-called abortion live-birth dilemma has been haunting abortion profiteers since the days of legalization.

April 1973, Greater Bakersfield Hospital, Bakersfield, Calif.: A 4 1/2-pound infant was born live following a saline abortion (induced by an injection of salt solution) performed by Dr. Xavier Hall Ramirez. Informed by phone, Dr. Ramirez ordered two nurses to discontinue administering oxygen to the baby. His instructions were countermandated by another doctor; the baby survived and later was placed for adoption.

This above case was one of many highlighted by the Philadelphia Inquirer in a 1981 series entitled The Dreaded Complication. 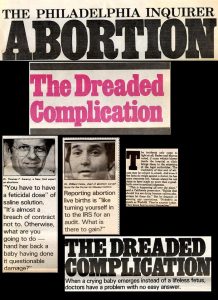 Another example from the report described what a Nebraska abortion doctor ordered a nurse, who found a live baby boy crying following a saline abortion attempt, to do. She told the paper the following: “He told me to leave it where it was, just to watch it for a few minutes, that it would probably die in a few minutes.”

In another case from 1974, the paper recounted the prostaglandin abortion of a baby who survived the procedure, only to die later: “One of the nurses said that the baby was alive. They took the baby out of the room. He never did cry, he just made some kind of a noise.”

A young resident was the first doctor to arrive. After detecting a strong heartbeat, she took matters into her own hands. She clamped the umbilical cord and sent the baby to intensive care.

“It was a shock, a totally unique emergency situation, very upsetting to all of us,” the doctor said. “Some people have disagreed with me [about ordering intensive care for an abortion live birth] but that seems to me the only way you can go. It’s like watching a drowning. You act. You don’t have the luxury of calling around and consulting. You institute life-preserving measures first and decide about viability later on.”

In 1989,  Pennsylvania abortion doctor Joseph Melnick was convicted of infanticide after it was proven that a baby he aborted survived the abortion. Hospital staffers where the abortion occurred said that they had detected a heartbeat and saw the baby move and gasp. For this crime, Live Action News contributor Sarah Terzo reported that the judge gave him no fine or jail time – only probation and community service.

By the 1990’s additional incidents of babies surviving abortion were being reported.

In Florida, Miami Right to Life documented the case of a 23-week-old male with Down syndrome, who pro-lifers endearingly named “Baby Special,” after they were contacted by an anonymous caller who claimed she worked at the hospital where the incident occurred. The witness also called the police, telling them that the doctor smothered the baby after it lived through the abortion process.

The report, which was published in the Miami Right to Life’s newsletter just after the incident, said that the medical examiner testified that the autopsy found pockets of air in the baby’s stomach and that the child had taken a breath. 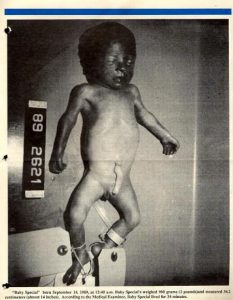 “When a fetus is aborted, sometimes there is some activity in the fetus and you normally don’t do anything. You let the fetus expire. The usual thing is just to take your time, don’t immediately do anything,” the abortionist told authorities. Authorities cleared the doctor saying there was no clear evidence that he smothered the baby.

In 1993, a New York abortion doctor was convicted of performing an illegal third-trimester abortion which resulted in him severing the arm of a baby which survived his abortion attempt. The public was horrified by the story, causing the abortion doctor, Dr. Abu Hayat, to be nicknamed the Butcher of Avenue A. 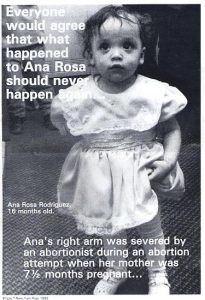 The baby’s 20-year-old mother, Rosa Rodriguez, was estimated to be about eight months pregnant when Hayat began the $1500.00 abortion procedure on her.

According to the Daily News, Rodriguez described being strapped in stirrups and held down by Hayat and his assistants while she begged him to stop the abortion. She testified that she no longer wanted the abortion after Hayat inserted a four-inch needle in her stomach that appeared dirty, and she began hearing women in other rooms screaming.

Hayat was found guilty of assault on Rosa Rodriguez and her baby Ana Rosa.

After the incident, pro-abortion talk show host, Phil Donahue had the child’s mother as well as the injured infant as a guest on his television show where he described the horror of the incident. Despite the fact that Hayat practiced legally, Donahue attempted to spin the story as unrelated to the abortion issue. The truth is that every day, infants are ripped apart limb by limb during abortions – but the majority are not born alive.

In June of 1993, abortionist Abu Hayat was sentenced to prison but was released on parole in 2006. He was discharged from parole supervision in 2009 and his sentence has been officially deemed completed. He tried to have his name changed but a judge refused his request to do so.

Doctors who perform late-term abortions or any abortion for that matter, often convince themselves that a preborn baby is not a person. This distorted view then is easily transferred onto the child if they survive the abortion attempt. An example of this was seen in an interview with late-term abortionist Kenneth Edelin.

In this discussion taped in the 1990’s, Edelin referred to the preborn child in the womb as a “developing mass of tissue within the woman.”

In the early 1970’s Edelin was charged with manslaughter in the death of a 20 to 24-week old baby boy after an abortion. The prosecution claimed that the Boston abortionist tried to asphyxiate the child inside the mother during a C-section type abortion procedure.

The Boston Globe recounted the case this way:

The abortion, which took place in 1973, began as a routine procedure: the injection of a saline solution that usually causes uterine contractions and the expulsion of the fetus. But several tries were unsuccessful, and Edelin completed the abortion by a surgical procedure known as a hysterotomy — making a small incision in the uterus, like a cesarean section, and detaching the fetus from the placental wall by hand.

A photo of the child preserved in formaldehyde was shown to the jurors.

“It looked like a baby,” a juror in the original case told the Associated Press. “[…] it definitely had an effect on me.”

The photo was called inflammatory by the defense, but it had already had an effect on the jury. Edelin’s lawyers argued that since the child was in the uterus, a “person” had never existed, so therefore a person had never died. Edelin was convicted, but it was later overturned.

Edelin, who died in 2013 has been called a hero by Planned Parenthood.

Perhaps the most famous abortion survivor is Melissa Ohden. In 1977, Ohden survived a saline abortion at seven months gestation. In 2012 she formed The Abortion Survivors Network and now works to educate the public on the realities of abortion and how often babies survive the attempt on their lives.

Gianna Jessen also survived a saline abortion and has shared her survival story through speeches and testimonials before the government.

Abortionists don’t want people to know that babies survive abortions, but each of these individuals proves that life really does begin before birth. It is the duty of each of us to respect those lives and allow them the right to be lived.