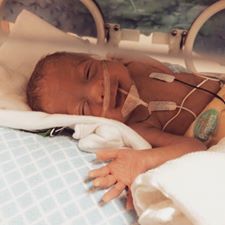 New Mexico’s Flagship school, the University of New Mexico (UNM), is a leader in the southwest region of the nation. Its medical division, the Health Science Center, brags on its “long-recognized role as New Mexico’s leader in providing health care.” Indeed, UNM is recognized for both its academics and its medical school and facilities, but it also has dark secrets that are now coming to light, thanks to a congressional investigation that has now been the subject of two criminal referrals to the state attorney general.

UNM’s Obstetrics and Gynecology Department’s claim-to-fame is its family planning residency, led by Dr. Eve Espey, the chair of the OB/GYN Department. The school trains its medical students in abortion procedures. UNM claims abortion training is an important part of healthcare in our nation. The family planning residency page promises, “The UNM Fellow will become expert at the range of family planning and abortion care….” However, the congressional report from the Select Investigative Panel on Infant Lives shows that the claimed “expertise” is actually a real issue: it details everything from aborted babies being left to die on the floor without attempts to resuscitate them to a top-level administrator who admits she is unfamiliar with laws related to the practice of abortion. 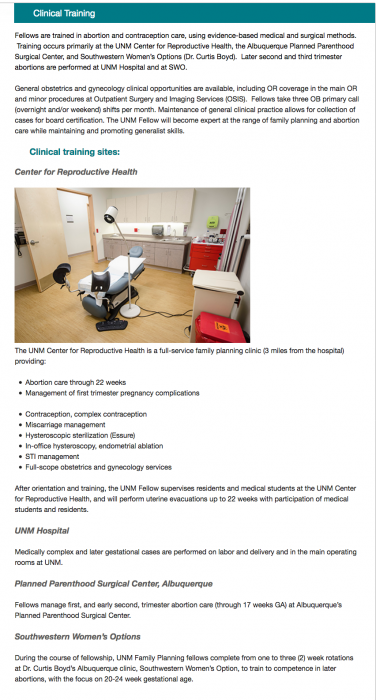 As Live Action News detailed previously, the Panel investigated the advent of abortion at UNM and noted that Drs. Espey and Lawrence Leeman were responsible for bringing the practice to the school’s health center. Pages 235-253 of the final report rehearses this revelation and reminds its audience of the way abortion went from not being part of any practice at UNM to being a significant part of its OB/GYN program.

On page 292, the Panel discusses an interview with “Dr. Administrator” — Dr. Eve Espey. Though the Panel redacts her name, it cites Dr. Administrator as a co-author of the article, You can’t do that ’round here: a case study of the introduction of medical abortion care at a University Medical Center. This is the article Espey wrote with Leeman detailing how they conspired to bring abortion to the university.

The report on Espey’s deposition is deeply disturbing. The Panel writes [emphasis added]:

SWWO openly performs a large quantity of abortions into the third trimester, and UNM Hospital will provide abortions beyond 25 weeks where there is “a maternal indication or a fetal indication.” Yet neither UNM nor SWWO appears to have any apparatus or procedure to ensure the survival of infants who show signs of life following extraction from the uterus. This is evident from [Dr. Administrator]’s deposition testimony when she was questioned on this subject:

A. . . The answer is no at the Planned Parenthood and Southwest Women’s Options and the Center for Reproductive Health. There are situations in the hospital where a planned abortion, an induction of labor for a fetus, for example, with severe anomalies is born alive.

Q If one of the fellows from UNM had been at Southwest, would they have been trained in what to do if a child was born alive?

Q So does your curriculum call for training of doctors of what to do if a child is born alive because of an induced abortion?

Q No training at all?

A OB/GYN doctors do not resuscitate neonates.

Q So who at the Southwest Clinic would do that resuscitation if it was necessary? …

[Dr. Administrator] would not directly answer the question whether “the decision to resuscitate a child that comes out of the birth canal” alive should be left to the woman and doctor alone, suggesting that “there is no answer” or that the answer would “depend on the individual circumstances of the patient.” When she was read the language of the Born-Alive Infants Protection Act and asked if she agreed with it, she responded, “I’m not familiar with the law.” She admitted she never discussed the law with counsel and did not “understand the relevance of this to my practice.” Coming from the official who is arguably most responsible for making UNM an abortion provider and providing the same function to outside clinics… this testimony is a startling reflection of the absence of attention given to any standard of care for infants that survive the abortion procedure.

These revelations are red flags to New Mexico Alliance for Life, the agency responsible for uncovering many of the violations at UNM. NMAFL’s Executive Director, Elisa Martinez gave a statement to Live Action News:

How many other students from Espey’s program are practicing medicine untrained and ill equipped to handle situations required by law in their field of practice? This is very serious, as it reveals the university’s OB-GYN Department Chair’s negligence at best and incompetence at worst. Dr. Espey must be removed from her position immediately and face disciplinary action, which should be taken by taxpayer-funded UNM Hospital and Health Sciences officials. We should expect professionalism and excellence not “shoddy medical training” from UNM’s top OB-GYN professor, especially since taxpayers are funding Espey’s salary, as the third highest paid employee at UNM, while our state is facing a serious budget crisis.

That’s a question that New Mexico Congressman Steve Pearce has, as well. On Friday, his office released a statement urging the UNM Board of Regents, as well as the New Mexico Attorney General, Hector Balderes, to “uphold laws and respect for human life.” Pearce’s office says:

When asked if she [Dr. Espey] was familiar with the Born-Alive Infant Protection Act, she responded that she was not familiar and that she did not understand the relevancy to her practice.

I am here to remind UNM, SWWO, and NM Attorney General Hector Balderas that respecting human life is relevant. I am here to remind them that as a taxpayer funded institution, upholding the law and punishing violators is relevant. In the UNM Health Sciences Center Code of Ethics, Dr. Paul Roth writes that, ‘In order to maintain public trust and accountability, we adhere to the highest ethical standards and compliance in all research activities.’ So I ask Dr. Roth, the UNM Board of Regents, NM Attorney General Hector Balderas and the taxpayers of our state; is it ethical to disregard procedures that check for signs of life, such as looking for a heartbeat or giving an Apgar test? Is it ethical for UNM to obtain the body parts of aborted babies, including baby brains for a high school summer camp dissection project, without proper consent? Is it ethical to leave a baby to die without care or acknowledgement in the name of research?

The Panel summary concludes with its own answer:

The testimony of both abortion providers suggests a lack of medical training and of any sense of obligation to be trained to preserve the life of an infant that survives the abortion procedure. It reflects a philosophy that a right to abortion somehow carries a guarantee of the death of the infant expelled during the procedure.

Indeed, as Martinez previously commented in her organization’s own press release:

The admissions of UNM abortionist and OB-GYN Dept. Chair Eve Espey, is shocking, and is only outdone by her willful ignorance of the law. Imagine an infant in an abortion clinic without food, without care, defenseless, confused, crying and grasping for life – being left alone to die on its own. It’s almost too difficult to imagine, but this is the reality taking place at UNM Hospital and Southwestern Women’s Options, confirmed by testimony from the abortionists themselves.

Meanwhile, as NMAFL also noted in a news release, the Panel also found women were not even given proper informed consent about donating aborted baby tissue, another basic law that a hallmark program would be expected to train its physicians in correctly. NMAFL writes:

The Panel also raised concerns about the systematic violations of informed consent laws. The report cites testimony by an SWO doctor who trained at UNM under Espey, that she had never consented a woman regarding fetal tissue donation, was unfamiliar with the consent form provided to the Panel, and did not know the informed consent law.

“Students under Espey’s instruction are not even being taught the basic informed consent laws as well as how to care for infants born alive during abortions that occur in the third trimester,” said Martinez. “The shining example of the lack of proper medical education under Dr. Espey at UNM is highlighted by her former student and current Southwestern Women’s Options abortionist’s testimony, who admits total ignorance of laws and practices in her field. How many other students at UNM are being improperly trained by Dr. Espey and potentially violating the law as well?”

Congressman Pearce summed up the  Panel’s findings on UMN in his statement last week:

The entire report released by the Select Panel raises serious concerns of ethical and legal violations occurring at UNM and Southwestern Women’s Options. Most troubling though is their complete disregard for regulations put in place by lawmakers to protect women and children. UNM and SWWO have created a culture where obtaining baby body parts, deceiving patients, and maintaining faculty perks are higher priorities than following laws and basic healthcare principles.

Now that Balderas has received the criminal referrals and a congressional committee has provided mounds of evidence that there is wrongdoing occurring at UMN, it remains to be seen whether this will be the evidence that makes the state of New Mexico look into its own back yard and dig up the remains of its dignity.