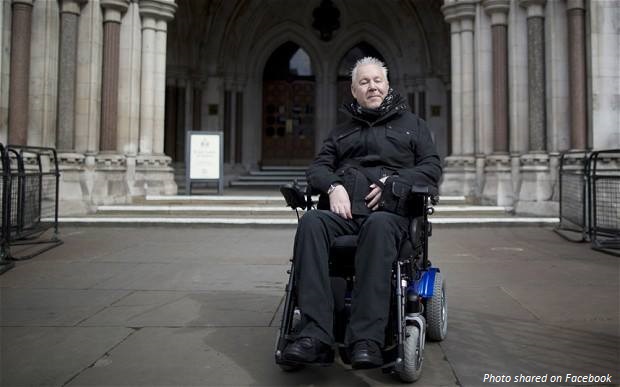 In the United Kingdom, assisted suicide is currently illegal — but one man is hoping to change that. Paul Lamb has been fighting for years to legalize assisted suicide, and is once again petitioning the High Court to have the law against it overturned.

Lamb, now 63, was paralyzed after surviving a car accident in 1990. He cannot move below his neck with the exception of some movements from his right arm, and he receives around-the-clock care. Lamb wishes to be able to choose when he dies — in other words, he wants to be able to commit suicide when he feels ready. Yet, because of his disability, he cannot do so without assistance. This, he claims, equals discrimination.

“I have been fighting this fundamental basic human right of choice over one’s own life since 2013,” he said in a statement. “I need to have peace of mind that I can make the decision to end my life with dignity. I am talking about my life, my decision, why should I be made to suffer? I feel so strongly about this. I have no option but to seek the court’s intervention again. I want to fight this, not just for me but for the many others in my position. We need to end this cruel and discriminatory law.”

While the United Kingdom’s Suicide Act 1961 decriminalized suicide, meaning anyone surviving a suicide attempt would not face prosecution, Lamb argues that this is discriminatory against people with severe disabilities who cannot kill themselves on their own. If the High Court agrees with Lamb, then the government will have no choice but to re-evaluate the law.

Though Lamb and his fellow assisted suicide advocates claim this is nothing more than an issue of having choice in how and when they die, and prevents “undignified” deaths, others disagree. Dr Mike Pickering, of the Care Not Killing alliance and chief executive of the Christian Medical Fellowship, is one of those people. “If you have care costs associated with your treatment, if you have an inheritance being worn down by that, of course people are going to feel a pressure to not be selfish and seek assisted dying even if it is not their wish, and a right to die could become a duty to die imperceptibly,” he said.

Other people with disabilities have likewise spoken out against assisted suicide, pointing out that if it’s legal, it could be far too easy for someone with a terminal or lifelong disability to make a rash decision because they are experiencing a low point in their lives. “I have difficult days and those days I don’t need to be confronted with easily accessible death,” Kylee Black, who has Ehlers-Danlos Syndrome, said to the New Zealand Herald. “If assisted suicide is legal it would be legal to promote it. I don’t want to be triggered by assisted suicide ads or flyers. I have multiple specialists and go to hospital many times a year. I know my care costs a lot of money. But I also know I contribute to society.”

Multiple studies from several reputable medical journals have found that people are not committing assisted suicide due to fears of dying a long, painful death. They choose it because they think they are a burden to those around them, they have a lack of support, and they are depressed or hopeless. When these issues are addressed, the request very often is withdrawn.

If Lamb gets his wish, then the most vulnerable people in the United Kingdom — people with disabilities, the elderly, the poor, and the sick — will be directly told that their lives are not worth saving when they are suicidal and depressed, while those who are healthy and seen as more valuable will be privileged to receive suicide prevention care. In every circumstance, suicide is seen as something terrible and tragic, to be avoided at all costs… unless the person is sick or disabled or old, and then, it’s something to be assisted and accommodated. Worst of all is that it somehow has become the more “dignified” way to die. It’s heartbreaking that Lamb feels that he may one day wish to take his own life, but the answer isn’t to put countless other Britons at risk.