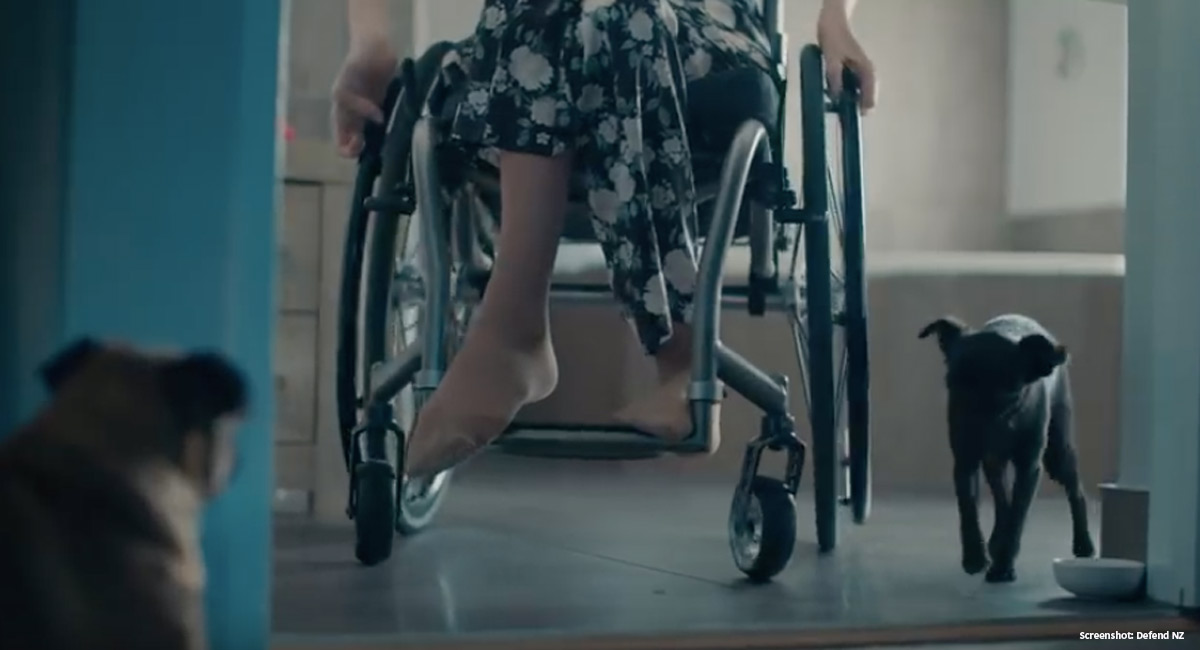 For now, assisted suicide is illegal in New Zealand, although lawmakers in the island nation are closer than ever to legalizing it. While assisted suicide is said to be the remedy needed for people with terminal illnesses and severe disabilities, many of them are speaking out against it, insisting that their lives are worth living.

When she was 17, Claire Freeman was in a car accident that broke her neck, and paralyzed her arms and legs. She now is a tetraplegic model, and speaks out against assisted suicide — even though she once considered killing herself at a euthanasia clinic. Despite her disability, Freeman got a college degree and was working as a designer in Christchurch, and thought she was happy — until the 2011 earthquake, which she said revealed “a whole lot of grief that I had been holding deep inside.” She then attempted to kill herself four times, once landing in the hospital for a week in a coma. But instead of trying to address her psychological pain, the psychologist at the suicide outreach clinic referred her to a Swiss euthanasia clinic.

“I said I’m thinking about an assisted suicide. He said, ‘That could be an option for you,'” she told the New Zealand Herald. “So I started putting things together to do that. I was in constant pain, while still trying to work and build a house and all sorts of things.” But after suffering another medical emergency, she ended up even more disabled — and it ended up saving her life. She had to scale back, rest more, and work less, and started pursuing her doctorate degree. During her education, she began to see things differently.

“She [her professor] started talking about quality of life, and I realised that a lot of the advice I had been given, like from the psychologist and from a psychiatrist who saw me after an earlier suicide attempt, was because they were looking at me and just seeing the disability,” Freeman said. “They were not saying, ‘Hey, what’s going on in your life? Are you working too much? Are you in too much pain?’ None of those questions were asked, it was just, ‘Of course she wants to die, she’s in a wheelchair, she’s in pain.'”

Freeman now advocates for other people with disabilities, counseling them when they struggle with suicidal thoughts. She also has become a model. And she has appeared in a mini-documentary called #DefendNZ.

Also featured in the #DefendNZ series is Kylee Black, a New Zealander with Ehlers-Danlos Syndrome, a terminal condition affecting her joints, ligaments, tendons, skin, blood vessels and internal organs, making her heavily reliant on others. Yet she still opposes assisted suicide, and worries about what it would mean for people like her if death was available.

“I have difficult days and those days I don’t need to be confronted with easily accessible death,” she said to the New Zealand Herald. “If assisted suicide is legal it would be legal to promote it. I don’t want to be triggered by assisted suicide ads or flyers. I have multiple specialists and go to hospital many times a year. I know my care costs a lot of money. But I also know I contribute to society.”

For Black, the idea that assisted suicide is a “choice” is a lie — and she argues that people like her would feel pressured to choose death, due to how much it costs for her to receive treatment and medical care.

Black has good reason to fear that her life will come with a price tag, considering people with disabilities are barred from entering New Zealand because of the supposed cost of their health care. And it’s easy for people battling terminal illnesses or disabilities to feel that they are a burden on those around them or on their communities, especially when ableist messages are so common and people are told it is better to die than live disabled. Indeed, multiple studies from reputable medical journals have found that people do not choose assisted suicide due to pain or fear of death; they do so because they feel depressed and hopeless, lack support, and fear that they are a burden to the people around them. When these issues are addressed, the request to die is often withdrawn.

Assisted suicide directly targets the most vulnerable in society — the poor, the disabled, the elderly, the sick; while those who are healthy and able are told that their deaths are something to be avoided at all costs, people whose lives are deemed not worth living are told that suicide is an acceptable choice. And there’s nothing dignified about it.