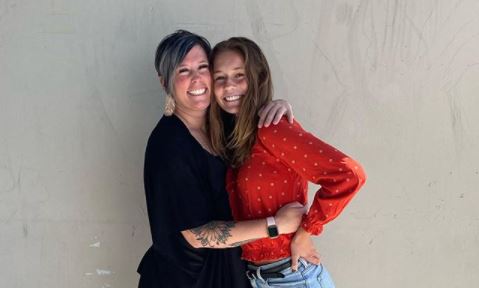 Fifteen and pregnant, Marlys Monet kept the news to herself for seven months until she came home to find her parents waiting with a pregnancy test. The positive test confirmed what she had been denying, but as she sobbed, her mother and father, though disappointed, vowed to care for her and the baby during the pregnancy. Together, they decided open adoption was best for everyone, and today, Monet has no regrets.

“I was completely terrified,” she explained after her child’s kicks forced her to accept that she was pregnant. “So many thoughts were running through my head, and I simply had no idea what to do. I just wanted it to all end. Depression and anxiety completely consumed me. I was paralyzed with fear.”

Merrin is officially 16! • I snapped her at midnight a tear filled message letting her know how proud I am of her. • This my friends is why I chose life. • She is 16. • I was 16 at exactly this moment in labor with a precious life. • From the moment I conceived her she was always a precious life. • I cannot imagine a world where she was not in it. • Yes evert year I cry on her birthday and I remember the hard, but you darn well better believe I remember all of the good. • So today would each of you help me in wishing my beautiful firstborn a Happy Sweet 16!!! • #adoption #birthmom #igaveherlife #shegaveherafuture #webothgaveherhope

Unplanned pregnancy, especially among teenagers, causes a great deal of fear. That fear can lead lead girls to quickly decide on abortions which they later regret, or leave them more susceptible to pressure to abort. Thankfully, for Monet, her mother was supportive and made an appointment with her OB/GYN. That’s when everyone realized she was seven months pregnant with a baby girl. She and her mother went shopping for maternity clothes and her mother set up a meeting with an adoption counselor.

“I remember the adoption counselor being kind,” said Monet. “Now looking back, I see the empathy she had to be able to sit with me, to see me and see my pain. When she left my home that day, I knew open adoption was the best option for my baby girl. I called her dad and let him know this was the path I would be taking, and I invited him to be a part of the journey.”

I promise you if you look back over your life you will see God’s fingerprints all over it. • When I was 16 I could have never imagined that this would be my life at 33. • There was so much brokenness and pain, but so much beauty and goodness too! • I could only see that moment & that situation at 16. • But… God saw the whole story. • His plan for it all was so much better than I ever could have dreamed or asked for. • Be thankful for the hard & broken moments because God promises redemption & beauty from ashes. • We just have to be faithful in the midst of it all. • Do me a favor today & take a moment to be thankful for all the goodness in your life. • #butgod

The next time she met with the adoption counselor, they looked through books of prospective adoptive parents and Monet settled on the first couple she saw. She and the father of her baby met them for dinner with the adoption counselor and everything began to fall into place. She knew she had found the people she wanted to be parents to her baby girl, but her heart broke at the thought.

“I climbed in the passenger seat of the car and I lost it,” she said. “I knew this was the right decision to place my daughter into the arms of someone else. I knew she couldn’t be mine because that would simply be selfish. This child deserved more than I could ever dream of giving her. Once my sobs slowed, I looked at her birth father and said, ‘Those are the people that will raise our baby girl.'”

As her due date approached, Monet struggled with her fears. She wanted to have some time alone with her daughter after giving birth, and thankfully, everyone agreed.

I cannot put into words what having this one with me for a few days meant to me. • There was so much laughter. • So much goodness. • So much beauty. • Such an incredible picture of God’s redeeming grace in my life. • I have so much to share, but for now… • Our goodbyes will never be easy. • I will always hold her a little bit longer and give her one thousand more kisses. • I am going to soak in the Jesus moments of the last few days. • And praise Him for writing such a beautiful story for Mer & I. •

“Within 2 hours of arriving at the hospital, it was time to push,” she wrote for Love What Matters. “Oh my goodness I was so not ready for this, emotionally or physically. This was it. I knew within a day or two my baby girl would no longer be mine.”

Monet named her daughter Kya and everyone in the family was able to meet her. She spent two days with her daughter before handing her to her new parents. Her heart broke. “I wavered. I fought. I cried. I broke. But in the end, I knew what I needed to do. I knew what was best for her and her future, and it simply wasn’t me being her mom,” she explained.

As the years went by, Monet kept in contact with her daughter’s parents and was able to visit her daughter. The adoptive parents sent her gifts on Mother’s Day and she always knew what was going on in her daughter’s life.

Redemption moments. • This entry way in this home has held some BIG healing moments. • I wish I could share all of them… • Someday I will. • But for now I am sharing this beautiful photo of all 4 of my precious loves. • There is healing & grace wrapped in this photo. • Praising Jesus for all of His goodness! •

“Recently though, it has been beautifully hard,” she said. “My birth daughter is now 16 and in her junior year of high school. My baby girl and I are blessed to see one another weekly. She calls me mama and reaches out when she needs advice or just a listening ear. My 3 children absolutely love their big sister and run and jump into her arms when she walks through the door.”

Though placing her daughter for adoption broke her heart, Monet has no regrets. She likes to say about her daughter’s adoptive mother, “I gave her life, she gave her a future, and we both gave her hope.”

On her daughter’s 16th birthday, Monet turned to Instagram to wish her a happy birthday and celebrate her life. “From the moment I conceived her she was always a precious life,” she wrote. “I cannot imagine a world where she was not in it. Yes [every] year I cry on her birthday and I remember the hard but you darn well better believe I remember all of the good.”