The Ohio Department of Health has issued a civil fine of $40,000 to Capital Care Network in Toledo, Ohio, in light of health and safety standards violations.

In a press release, Ohio Right to Life notes:

State health inspectors discovered that after one woman had an abortion, the doctor believed that he might have perforated the woman’s bowel. Capital Care Network did not follow their own medical emergencies procedure, in which they should have called 911. Instead, they sent the patient out the back door and into an employee’s personal car. They dropped her off at the hospital, and then came right back, not ensuring that the woman was treated promptly.

This news comes just prior to a September 12 Ohio Supreme Court date to hear arguments in Capital Care Network of Toledo v. State of Ohio Department of Health, a case that could determine whether the abortion facility will be allowed to remain open. According to the press release, the facility “was ordered closed a few years ago because it lacked a transfer agreement with a local hospital.”

Pro-life group Operation Rescue notes that there were “five serious violations identified by the Department of Health” in the April 1, 2017, abortion mismanagement. OR lists the following:

• Failure to ensure the Medical Emergencies policy was implemented as written;
• Failure of staff to document and review the event;
• Failed to document and review all adverse events as part of its Quality Assurance program;
• Failed to ensure that the patient transported to the hospital was accompanied by her medical record;
• Failure to provide the patient with discharge instructions upon leaving the facility.

Capital Care Network did not call an ambulance for the abortion patient, and failed to send her medical chart with her to the emergency room, leaving doctors there little to go on for the patient’s treatment. The staff member who drove the patient to the hospital also failed to remain with the patient. These were all violations of the facility’s Medical Emergencies policy.

The inspection report from the Ohio Department of Health notes that when the staff member, Schuyler Beckwith, was questioned about why the policy had not been followed, she replied, “I guess the Doctor didn’t feel it was that much of an emergency.”

But there’s a problem with this: the inspection report lists potentially serious complications with the abortion patient, as the facility’s own post-abortion ultrasound revealed “possible retention of products of conception” —  meaning not all parts of the preborn baby were found to have been removed — as well as a “possible perforation of bowel in cavity.” 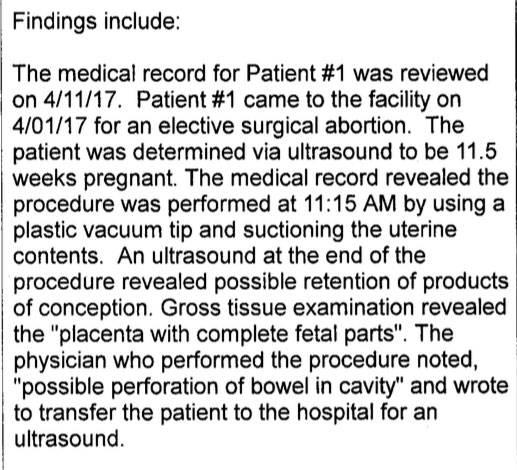 The patient had a suction aspiration abortion at 11.5 weeks. This procedure can be seen in the video below, explained by former abortionist, Dr. Anthony Levatino, along with the risks of the procedure: