Scott Johnston of Silent No More interviewed a nurse who participated in several abortions. She witnessed two partial-birth abortions and one first trimester abortion in the hospital where she worked in obstetrics. Partial-birth abortion is a term that refers to a procedure called dilation & extraction. In a partial-birth/dilation & extraction abortion, a late second or third trimester baby is delivered feet first and the head is held within the mother’s birth canal. Surgical scissors or a syringe is used to pierce the exposed back of the neck, and then the skull contents (i.e. the brain) are suctioned out through a tube.

It is now illegal to commit abortions this way. However, abortions are still committed in the second and third trimester, either by dismemberment (D&E) or by injecting a lethal dose of digoxin into the baby.

Here is an excerpt from the interview, which can be found in its entirety here.

How many partial birth abortions did you personally witness?

“Two full-term abortions. They were done at nine months.”

What do you know of the circumstances surrounding these abortions? Why were they being done?

“One of the mothers already had three or four and she didn’t want any more.”

“The other girl was single. She didn’t have a husband and had no means of support. I asked, ‘Why don’t you put the baby up for adoption?’ She said, ‘I don’t know how it would be treated.’”

She then goes on to talk about the doctor who performed the abortions:

“The doctor was an O.B. doctor. I would say he was not of the highest caliber either. He had a bad reputation. He had a lot of deaths of babies that were born because he did not take care of them properly. He was sloppy. Normally, this doctor would be in the farthest back delivery room. When they did abortions, the doctors usually had their own nurse. This one didn’t. He was a sleezeball. [Sic]”

Johnston then asked her to describe what she saw when the doctor performed the procedure.

“He turned the baby around [in the womb] and brought it out feet first. That’s one of the worse [sic] things for the mother that you can do. I was helping the doctor hold the baby [to keep it in the birth canal]. The other nurse got the instrument [a large syringe with a large needle], handed it to the doctor, and he inserted it into the base of the skull. Then he pulled the baby out. Its little hands were grasping. When the baby quit grasping, then he delivered it. He used the syringe to suction out the brains. That’s more traumatic on the mother than if she had given a normal birth.”

“They took the [dead] baby and wrapped it up in a receiving blanket and asked her [the mother] if she wanted to hold it. She said she didn’t want to.

Neither one of them wanted to see them.”

“They were sent to the morgue.”

These were two perfectly healthy, full-term babies that were legally killed. Neither one of them had a defect that the nurse could see, and neither one of the aborting women had a medical problem. 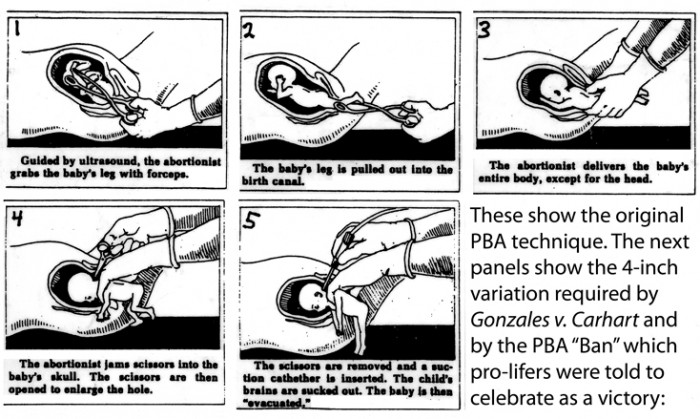 The interview goes on:

What was your reaction?

“I was so sick. I was absolutely nauseous. I couldn’t believe all that was taking place.”

“I told the charge nurse I didn’t want to work with him anymore.”

“I think it’s such a horrible thing. I said a prayer for those babies.”

What was the reaction of the other personnel who were present with you at these abortions?

“With the doctor, he was so nonchalant. It was no big thing.”

Scott Johnston then asked the nurse about the first trimester abortion she witnessed. She describes how the abortionist used a sonogram machine during the abortion procedure:

[The instrument used for the abortion] it is a silver tube with stainless steel blades on it. He inserts it first, and then turns on the suction. The baby comes out all shredded. ‘Now, you watch this, and you’ll see how it doesn’t feel a thing.’ [The doctor said] I think it was kind of shocking to him. I looked at him and he looked at me, and then he wouldn’t look at me after that. I don’t think he had used a sonogram before during an abortion. It was over in a short period of time.”

She then goes on to reveal:

“That doctor is not here [at the same hospital] anymore. He had so many malpractice suits he had to leave town.”

Unsurprisingly, this nurse was so horrified by what she witnessed that she began to speak out against partial-birth abortion. She says:

“Anybody who starts talking about partial birth abortion, I say, ‘Do you know what it is?’ And I tell them what it is! They just usually look kind of wide-eyed with their mouths open. And one girl said, ‘I don’t believe you.’ I said, ‘why should I stand up here and lie to you?’ Most people are just shocked.”